Something very “seismic” has happened to our electricity prices.

Paul McArdle of WattClarity goes through each state looking at quarterly trends and prices, and remarks that things are going “off the chart”. We had some electricity crises in Australia in the last 12 months, and 2016 was a significantly more expensive than all previous years bar the major drought year of 2007. But ominously, prices haven’t come down in what should be a “normal” quarter. In Tasmania there was a crisis last year when dams ran dry, and the undersea Bass cable broke. But this quarter, prices are only $3.20/MWh lower than the crisis levels of Q2 2016 despite water in dams and a working cable to Victoria. Something has gone seriously wrong with our electrical grid and market. In both Victoria and South Australia prices are higher on average than any previous April-June quarter in the 19 year history of the National Electricity Market. In Queensland and New South Wales, prices are at the “second highest”.

McArdle goes to some length to explain that this is not “one factor”, which seems obvious and fair — Its the combination of the closure of Hazelwood and Port Augusta coal generators; the extremely high gas-prices; the lack of wind; the increase of intermittent renewables; and the way electricity generators game the market. But what McArdle doesn’t mention is that these factors are not independent. If there was more coal fired power there wouldn’t be such high gas prices, and if there weren’t intermittent, highly subsidized generators, there wouldn’t be as much room to “game” the market. If there is some ominous leap in electricity prices, we know from years of experience that a grid with a lower renewables input provides cheaper time-weighted average prices even though for some isolated, miraculous moments every day, using a cherry picked description, and ignoring costs of transmission lines and auxiliary services (like “stability”) we could say we are getting “free electricity”.

A grid is a complicated animal, and people studying small separate parts of it can make accurate but totally contradictory statements. What matters is the total cost of electricity over all, after the wash, the games, the crises and the subsidies are played out. The high gas prices have other causes beyond coal and renewables, but there’s no question that Australia had a cheap backup, it could always use coal, which would mean the high gas prices wouldn’t have to hurt so much. The renewables subsidies are pushing the cheapest electricity source out of business. There is an Easy and Obvious way to let the market fix this problem that the government hath engendered, but there is no easy and obvious way to run a grid off wind and solar and no easy way to control our climate in 2100 using electrical power stations in 2017.

Thanks to Paul McArdle for crunching these numbers. Even the ABC is paying attention now, writing both “Power prices are ‘off the chart‘ and there’s no relief in sight” and  “Victorian businesses struggling with power ‘train wreck’ as wholesale prices triple since 2015“. Go to his site for the gory details.

In Victoria, we see , we see the average price for the Quarter break $100/MWh (up at $104.92/MWh) – a gut-wrenching level for the vast majority of energy users in what has traditionally been one of the more “boring” quarters.

In Victoria, we see that average Q2 prices have never been higher, across all 19 years of NEM history. 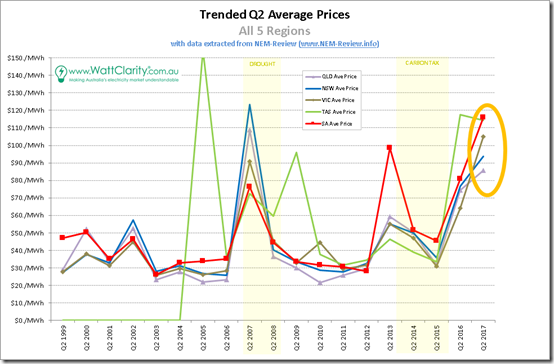 In the same vein as last year, the most important take-aways from this analysis should be:
1.  That the outcome for Q2 2017 was even more remarkable than Q2 2016; and
2.  That it appears that we’re entering a new environment that’s distinctly different from the years that preceded; and
3.  That this affects everyone, right across the NEM ; and finally that
4.  Those pre-disposed to draw overly simplistic “it was due to … [this one factor]” conclusion are unlikely to be correct, and could be dangerously misleading. 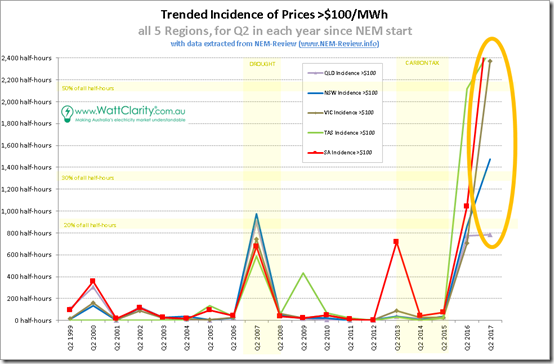 However the cost structure has shifted dramatically.

“These days generators can’t, or don’t bid, at anything much under $50/MWh,” Mr McArdle said.

See: Wattclarity for the rest.