Craig Idso and Pat Michaels point us at the global anachronism that is the Antarctic.

It’s not just that models are wrong about the amount of Antarctic Sea Ice, it’s much worse than that. Only one in seven models even get the sign of the trend right.

CO2 is trapping all that heat over Antarctica but for some reason, the sea-ice is expanding. 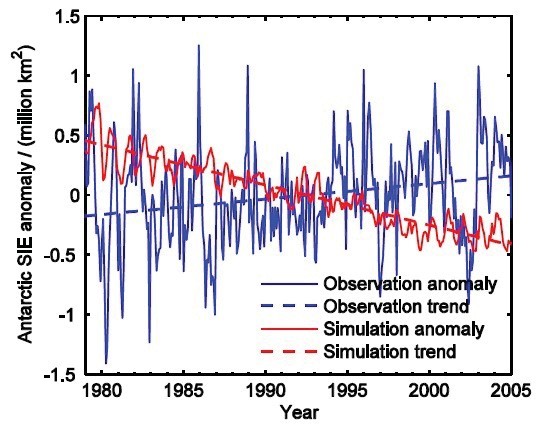 Their graph ends in 2005, but Idso and Michaels graph the last ten years as well which doesn’t look that different.

Forty-nine models, almost all of the CMIP5 climate models and earth system models with historical simulation, are used.

According to the most recent report by the Intergovernmental Panel on Climate Change (IPCC), CO2-induced global warming will result in a considerable reduction in sea ice extent in the Southern Hemisphere. Specifically, the report predicts a multi-model average decrease of between 16 and 67 percent in the summer and 8 to 30 percent in the winter by the end of the century (IPCC, 2013).

Kenneth Richards went through the Antarctic Sea Ice debacle on Notrickszone late last year. There were all kinds of excuses for the failure of the models:

2005: Sea Ice May Be On Increase In The Antarctic: A Phenomenon Due To A Lot Of ‘Hot Air’?