Scientists Getting Filthy Rich On Climate Change? Here Are The Facts

This train has no gravy on it.

Get ready to rethink the role of carbon. Sharwood comes armed with facts like a non-quote from an anonymous climate scientist friend in Tasmania who says he’s only earning $80 k and who, “impressively”, said he’s in it for “love not money”. He reckons he could’ve been earning $200k in IT. (Not in Tasmania, buddy).

So forget radiative transfer and moist adiabatic lapse rates, science is now decided by the love test. Who loves science the most? Maybe the skeptics who are working for nothing, eh? 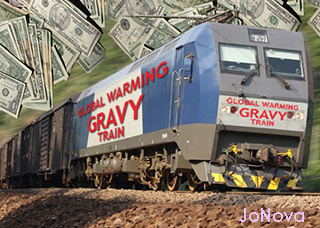 One day when they learn to google, they’ll find that we skeptics don’t talk about  climate scientists getting “filthy rich”. We talk about Al Gore, about Global Bankers, and we talk about how GE took in $9b in revenue lsat year from renewable energy. We talk about  how global carbon markets turned over $176 billion in their heyday and  Global Renewable Energy investment reached $257 Billion.

We talk about estimates that the whole global climate change industry is worth about 1,500 billion a year.

As for poor Climate Scientists, no one said they were raking it in, but compared to the rest of the scientific industry, they get rock star treatment. What other branch of science gets two-week Olympic sized conferences each year, plus television interviews, red carpet awards, and documentaries?

And these guys are the ones who can’t predict anything. Wall Street doesn’t want those kind of modelers.

When will Banks care about whales?

When they can trade whale-credits.

Banks for “the environment”