Overnight a river in Northern Canada disappeared. A glacier had retreated and allowed the water upstream to sneak out via a different path. The water now ends up in the Pacific 1300 km away from the Bering sea where it used to emerge. 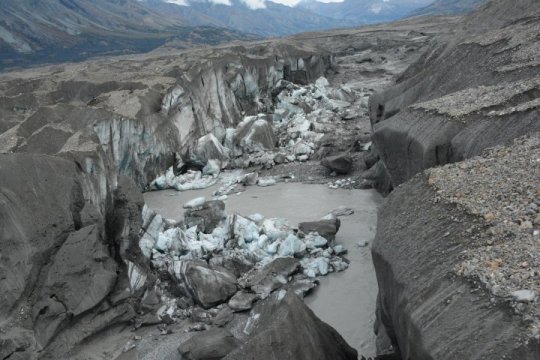 A close-up view of the ice-walled canyon at the terminus of the Kaskawulsh Glacier, with recently collapsed ice blocks. This canyon now carries almost all meltwater from the toe of the glacier down the Kaskawulsh Valley and toward the Gulf of Alaska.
Credit: Jim Best/University of Illinois

You might think this event has happened every time glaciers retreated in the last 30 million years, but you would be wrong. Really, this is due to coal-fired power stations.

In a report published on Monday in the journal Nature Geoscience, Dr. Shugar and his colleagues provide a detailed analysis of how an atmosphere warmed by fossil-fuel emissions has led to the river’s dramatic disappearance.

“To me, it’s kind of a metaphor for what can happen with sudden change induced by climate,” said John Clague, who holds a chair in natural hazard research at Simon Fraser University and was a co-author on the report.

Let’s play River-trivia — all the other times the world warmed, the river rerouted more slowly because:

How do we know it’s different this time?

The conclusion relies on a recently developed computer model that shows it is essentially impossible that the glacier could have receded so much and so quickly without the influence of human-induced climate change overlaid atop its natural fluctuations over decades and centuries.

Researchers were shocked (they are always shocked):

The discovery unfolded after Dr. Shugar and another co-author, Jim Best, first encountered the lingering trickle that is now all that remains of the Slims River.

“We were pretty shocked,” Dr. Shugar said. While the pair already had a sense that something was up, based on local news reports, “we had no idea what was really in store.”

Though his fellow author Clague predicted this himself ten years ago:

Clague began studying this glacier years ago for the Geological Survey of Canada. He observed that Kluane Lake, which is Yukon’s largest lake, had changed its water level by about 40 feet (12 meters) a few centuries ago. He concluded that the Slims River that feeds it had appeared as the glacier advanced, and a decade ago predicted the river would disappear again as the glacier retreated.