Let’s close the cheapest generators of electricity. Will electricity bills:

A quarter of Australians don’t know. A half think the answer is “b” or “c”. It’s that bad.

A new survey came out this week which fans of renewables are using to argue we need more renewables, but hidden in the data is the big misinformation that underlies this attitude.

The wisdom of a campaign by the Turnbull government emphasising the risks of moving too rapidly to renewable energy has been thrown into question by polling that suggests a majority of its supporters don’t agree.

All Malcolm Turnbull has to do to turn these figures around is to tell the fact that coal fired electricity is generated for 3 – 4 cents a kilowatt hour. Then run this survey again, and see support for a renewables target crash.

Most Australians have no idea that coal fired power is the cheapest power by far. The Tooth Fairy subsidies mean that some people with solar panels on their roof think they are getting “cheap electricity” when really someone else is paying part of their bill. 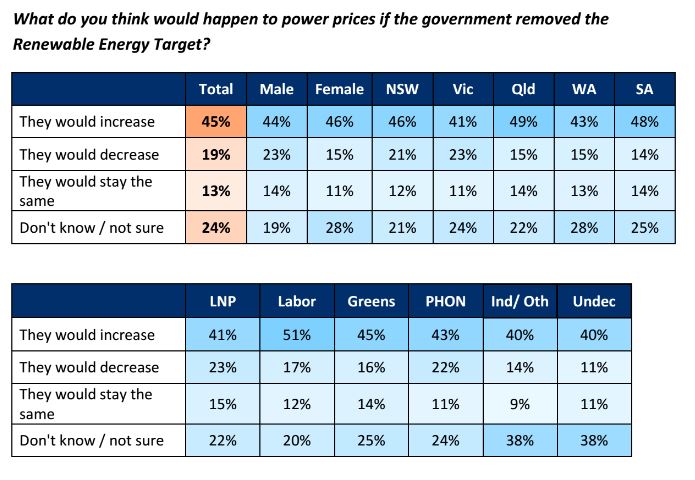 If the Australia Institute really wanted to understand what Australians think, they would have told Australians the price of coal fired electricity, told them the cost of the subsidy (RET = 8c/KWhr) and asked people how many dollars extra they are willing to pay for the RET, instead of quizzing them with loaded questions about situations that don’t exist anywhere in the world.

These push-polling type surveys that miss the key facts in the debate are measuring the success of PR campaigns, or the ignorance of respondents.