Right now, the hottest year ever appears to be causing an extra 4 billion tons a day or so of frozen stuff on Greenland. Top: The total daily contribution to the surface mass balance from the entire ice sheet (blue line, Gt/day). Bottom: The accumulated surface mass balance from September 1st to now (blue line, Gt) and the season 2011-12 (red) which had very high summer melt in Greenland. For comparison, the mean curve from the period 1990-2013 is shown (dark grey). The same calendar day in each of the 24 years (in the period 1990-2013) will have its own value. These differences from year to year are illustrated by the light grey band. For each calendar day, however, the lowest and highest values of the 24 years have been left out.

Over the last decade the Greenland Ice Sheet may have been losing 200Gt per year, but evidently, this winter it’s making some of that back. The Danish Climate Centre describes the graph:

The figure [above] shows the total daily contribution from all points on the ice sheet (top) and the same accumulated from September 1st to now (bottom). The blue curves show this season’s surface mass balance in gigatons (Gt; 1 Gt is one billion tons and corresponds to 1 cubic kilometer of water), and for comparison the mean curves from the historical model run are shown with two standard deviations on either side. Note that the accumulated curve does not end at 0 at the end of the year. Over the year, it snows more than it melts, but calving of icebergs also adds to the total mass budget of the ice sheet. Satellite observations over the last decade show that the ice sheet is not in balance. The calving loss is greater than the gain from surface mass balance, and Greenland is losing mass at about 200 Gt/yr.

Looks like there is a lot of snow in the southeast. Obviously climate models will show that climate change contributed to this. 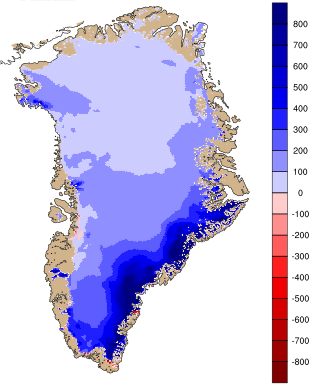 Map of the accumulated surface mass balance (in mm water equivalent) from September 1st to now.

In other news, climate change is also causing extreme cold in Canada this weekend. Thoughts go to our good friends there. Spots on Nullschool show parts of Canada at minus 30 C.