Malcolm Roberts will give his maiden Senate speech tomorrow (Tuesday) at 5pm at the Australian Parliament House in Canberra. To reserve seating contact Leon Ashby leon.ashby AT aph.gov.au or phone (02) 6277 3151. He has asked for updated graphs of the UAH data for Australia. His speech may be available via the APH website. (h/t Jim S)

Luckily for us the UAH satellite database can be filtered to track temperatures in the lower troposphere over the Australian land mass. Thanks to John Christy for providing an Australian specific dataset.

We’ve put out a third of all the CO2 homosapiens has ever made in the last 20 years, and it apparently has made no meaningful difference to temperatures here. We’ve put out 60% of all our CO2 since the satellite record began.

Here is the full Australian monthly data from 1979 – now for all seasons graphed below. There are breathless news articles hyping every hot month, every hot week, for records in every little region, and even for a single record hot nights, but no press release to say that temperatures in Australia have not really changed in a meaningful way since 1995.

Thanks to  KensKingdom for regular updates to the UAH series and calculations of “the pause” in regions all over the world.

The Australian UAH data covers land but not ocean, Tasmania, but not PNG or Indonesia. It’s really quite useful recording that operates continuously day and night, measuring the temperature of the air from the ground to about 8km up. It is not the same as what the BOM measures on the ground, but in theory, according to the climate models, the troposphere should warm faster than the ground. (That’s very central to the amplification of effect of CO2, it is the missing hot spot, the fingerprint of CO2).

The BOM data is below (be aware it covers a different time period starting in 1910.)

Source: The Australian Bureau of Meteorology 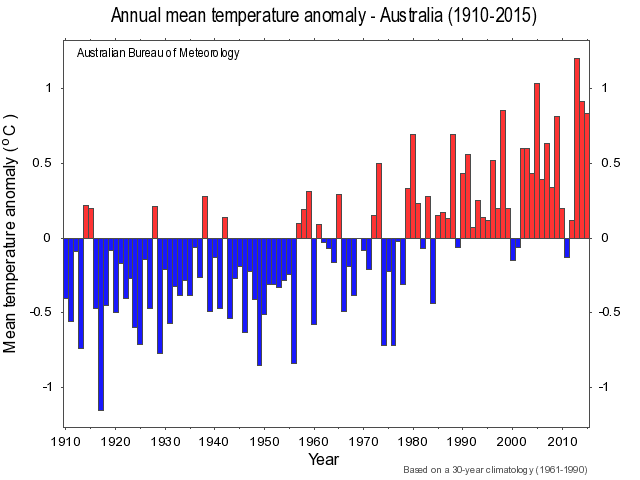 The warmists kick up a to-do,
That mankind has increased CO2.
Which can not be the cause,
Of the twenty year Pause,
And the earlier mild warming too.