It’s everything the Green revolution was supposed to offer — jobs, energy independence, money money money, and massive reductions in CO2. Australians hear how bad fracking is but not much about the transformation of the US.  h/t GWPF…

Exploitation of new oil and gas reserves by fracking shale rock has transformed the US economy since it started just 11 years ago – creating at least a million jobs and slashing electricity bills and greenhouse gas emissions.

The scale of this energy revolution is almost unimaginable.

The Marcellus shale bed in Pennsylvania is thought by geologists to contain enough gas to power and heat every home in America for 50 to 100 years. Yet a few hundred feet beneath it lies another giant formation, the Utica, that contains enough gas for a further century. — Daily Mail UK.

There’s a message here about how Australia could meet its obscene 28% reduction targets for carbon emissions. A caring Greenie would say No to more gifts for windfarms — and get cracking on the fracking. (Do they want to save the world or not?) 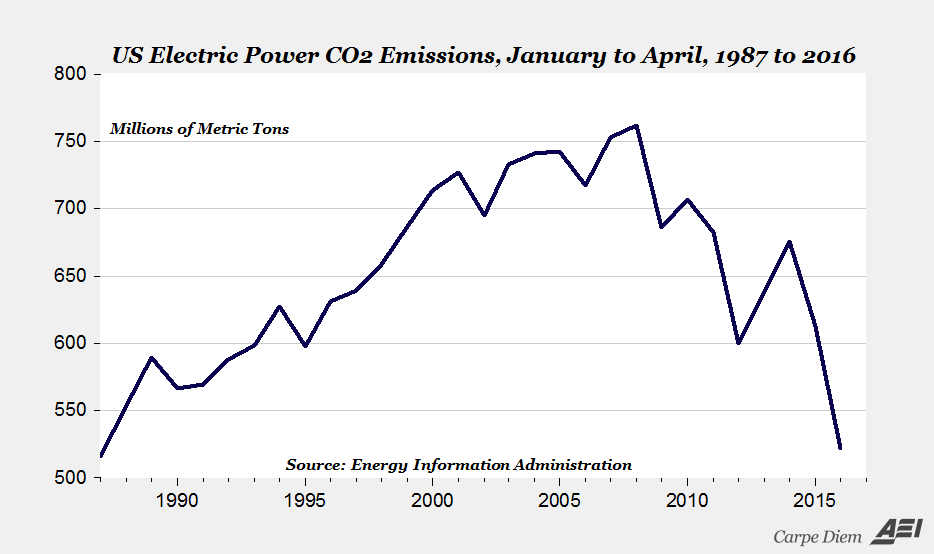 See The AEIdeas Blog — and their Charts of the Day.

Mid 2017, the USA will be the Worlds largest oil and gas exporter

“For the first time since Ike was in the White House and lead was in gasoline, exports of U.S. natural gas will outstrip imports in a shift that could occur as soon as the end of this year. The change will mark a significant milestone – the latest in America’s transformation into the world’s biggest oil and gas producer…” — US News

*Update: oops. Added the “No” to the No more gifts to windfarms.