File it under: Amazing

A “Weather Bomb” storm in the Atlantic generates pounding seismic waves that can be detected through the Earth as far away as Japan. They used 200+ stations and could detect the distance and direction of these microseismic waves. This could be pretty useful to figure out more about what’s under the crust in the same way that an “X-ray” works on us. 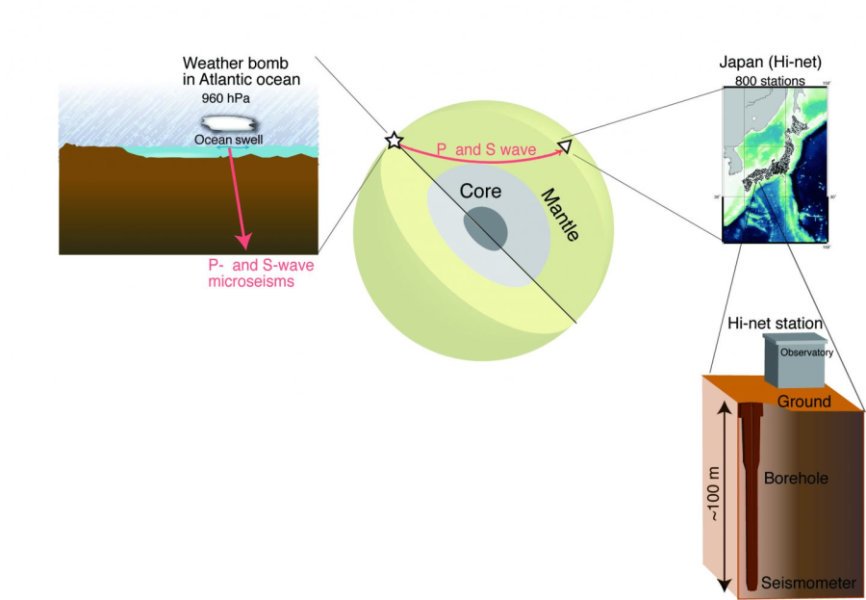 Press Release:  An Atlantic “weather bomb,” or a severe, fast-developing storm, causes ocean swells that incite faint and deep tremors into the oceanic crust. These subtle waves run through the earth and can be detected in places as far away as Japan, where facilities using a method called “Hi-net” measure the amplitude of the storm’s P and S waves for the first time.Using a detection network based in Japan, scientists have uncovered a rare type of deep-earth tremor that they attribute to a distant North Atlantic storm called a “weather bomb.”

The discovery marks the first time scientists have observed this particular tremor, known as an S wave microseism. And, as Peter Gerstoft and Peter D. Bromirski write in a related Perspective, their observation “gives seismologists a new tool with which to study Earth’s deeper structure,” one that will contribute to a clearer picture of Earth’s movements, even those originating from the atmosphere-ocean system.

Faint tremors called microseisms are phenomena caused by the sloshing of the ocean’s waves on the solid Earth floor during storms. Detectable anywhere in the world, microseisms can be various waveforms that move through the Earth’s surface and interior, respectively.

So far, however, scientists analyzing microseismic activity in the Earth have only been able to chart P waves (those that animals can feel before an earthquake), and not their more elusive S wave counterpart (those that humans feel during earthquakes).

What’s more, the authors determined both the direction and distance to these waves’ origins, providing insight into their paths as well as the earthly structures through which they traveled. In this way, the seismic energy travelling from this weather bomb storm through the Earth illuminated many dark patches of its interior. Nishida and Takagi’s findings not only offer a new means by which to explore the Earth’s internal structure, but they may also contribute to more accurate detection of earthquakes and oceanic storms.