The price of carbon permits makes them useless. Governments have issued too many permits, and also put in competing programs to reduce CO2 emissions. The collective Green Gravy train is fracturing and now even frustrated carbon traders are pointing out that parts of the save-the-world-program make no sense.

“Some of the renewable-energy subsidies are stupidly, insanely expensive per ton of carbon dioxide saved,” said Louis Redshaw, who has his own emissions-trading company, Redshaw Advisors Ltd. in London, and was previously head of carbon at Barclays Plc. “Politicians are not only failing to deliver a comprehensive carbon price for the economy, they are busy undermining them where they exist.”

The price of carbon is destined to achieve its true value — nothing. The only reason it hasn’t done that already is thanks to governments changing the rules to keep it alive. 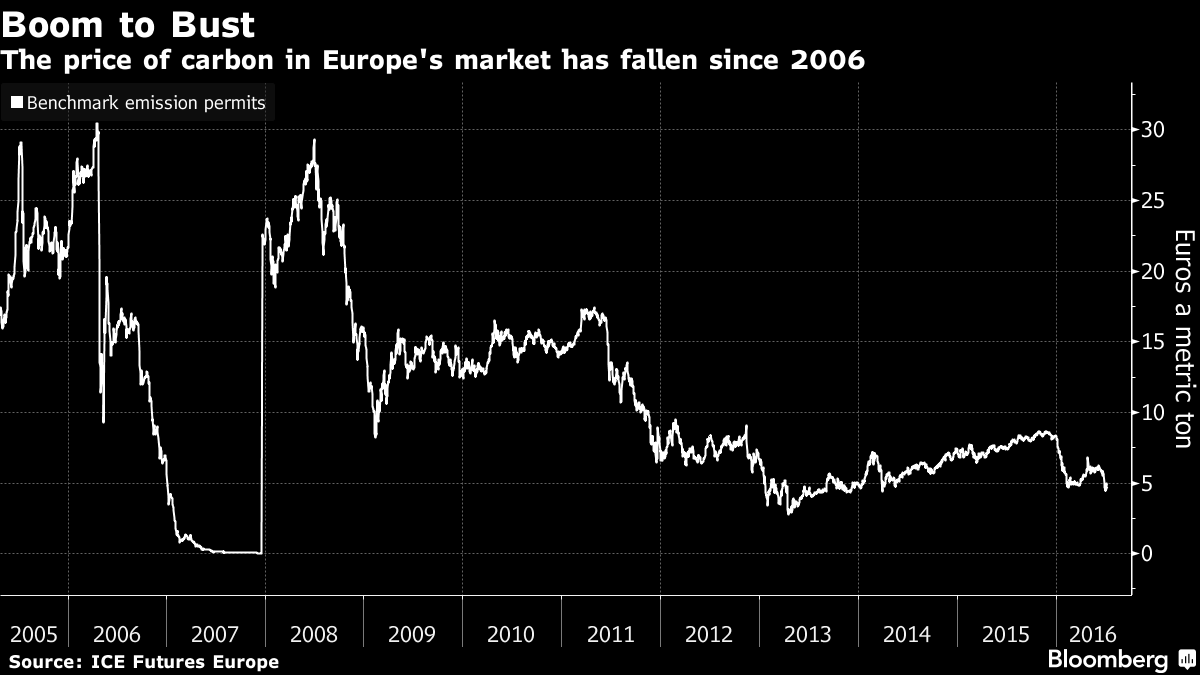 Carbon trading is still a big merry-go-round even if it’s going nowhere:

Today, there are 38 countries, cities, states and provinces using pricing systems in an attempt to put a lid on greenhouse gases, according to the World Bank.

(If you feel the urge to short markets like this, check out CoolFutures. See my post on the process of setting up the worlds first hedge fund aiming to pop this climate bubble.)

It’s a managed market, put on for show, and no government has the will to make the price high enough to work:

The problem is that the permits are selling at a slower and slower rate. The surplus of allowances is becoming so large in systems run by Europe, California and Quebec — which together account for more than 90 percent of global trading — that by 2022 it could cover the emissions spewing from every car on Earth for a full year, according to estimates by the London environmental group Sandbag Climate Campaign CIC and Bloomberg New Energy Finance.

In California’s market, all 23 million allowances sold in an auction in 2014. In May, 7.3 million permits found buyers, only 11 percent of what was put up for sale.

The cross-competing subsides are destroying the carbon market:

“When you put in place all these other mandates [like gasoline carbon intensity, wind power, and solar energy subsidies] , there is little work left for carbon markets,” said Meredith Fowlie, an economist and research associate at the University of California at Berkeley department of agriculture and resource economics.

But that’s the thing — the people who wanted a free market in carbon didn’t know what a free market was. All the mascot projects (like machines which “farm” the wind) can’t compete in a real free market. The point of the fake free market in carbon appears to be to subsidize financial houses, appease green activists, and to wear as a fashionable cloak. Judged by those criteria, the carbon market has been a success. The thing it hasn’t done is cool the world, but that was never the point.