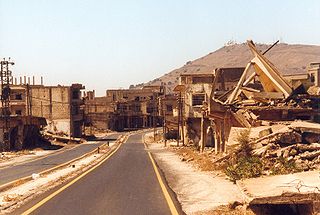 One day when you grow up, children, you too can be a research scientist who writes papers that tells the world something banally obvious — like, say, that natural disasters make conflict more likely.

I don’t think the journalist who wrote this next paragraph asked himself what it means (if anything):

Globally, there was a nine per cent coincidence rate between the outbreak of armed conflicts and natural disasters like droughts and heatwaves. But, in countries that were deeply divided along ethnic lines, this rose to about 23 per cent.

I suspect it means not much (define “coincident”), but if it did, it implies that globally, 91% of wars don’t coincide with natural disasters.

If there is a real message here, it appears to be that ethnic divisions cause wars:

Dr Jonathan Donges, who co-wrote the paper about the study, said: “We’ve been surprised by the extent that results for ethnic fractionalised countries stick out, compared to other country features such as conflict history, poverty, or inequality.

“We think that ethnic divides may serve as a predetermined conflict line when additional stressors like natural disasters kick in, making multi-ethnic countries particularly vulnerable to the effect of such disasters.”

Let’s look at the policy options to reduce wars:

1. Change the planet’s climate, or

3. Help the world get filthy rich as fast as possible.