Massive storm across Australia’s East Coast — 3 dead, 3 missing. Nearly half a meter of rain fell on Wooli (469mm) in 24 hours. Record rain and flooding occurred in NSW, Victoria, and Tasmania. Sympathies to victims and their families. 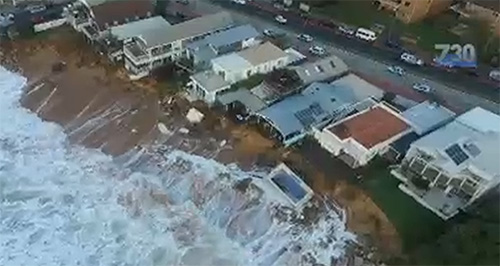 Houses left hanging as gardens and a pool disappear.

There is a lot we could say, but for the moment, marvel at the government brain that bans unauthorized sandbags, but taxes people to stop the storms.

The Big-gov solution — fine residents a quarter of a million dollars if they use sandbags.

[The Australian] Families whose multi-million-dollar Sydney homes were last night beginning to break away in another king tide could have faced fines of up to $250,000 if they even used sand bags to try to protect their properties.

Houses at Collaroy have been under threat since at least 1974 but the council has failed to build a sea wall or pump sand on to the beach because of environmental concerns and a belief that it was spending public money for the benefit of private landholders.

Or make that a million dollar fine:

Planning Minister Rob Stokes is proposing to increase fines to $1 million for residents who use sandbags to try to protect their properties as part of a new coastal management bill before parliament.

The council has been considering the issue of sea walls since at least 1992. A proposal in 2002 to build a sea wall was shelved after thousands of residents in the area protested. One concern was that sea walls could cause loss of sand.

Let’s get those priorities straight.

Landholders must pay for their own sea walls:

The council has now implemented a coastal zone management plan that allows for the building of sea walls, but only if land holders go through an exhaustive approval process and pay the full cost.

We would never expect ratepayers to build a private seawall. But all Australians should pay a carbon tax to change the global weather.

You know it makes sense…

To see photos of the storm: news.com.