This is your brain on government funding (pace Mark Steyn). The government of the Australian Capital Territory (ACT) gave $18k to a theatre group to put on a play called “Kill the Deniers”. Now, lucky us, we can read the e-book. Because the climate debate really needs more guns, hostages, brute force, and threats right?

Well, it does if you don’t have any evidence. 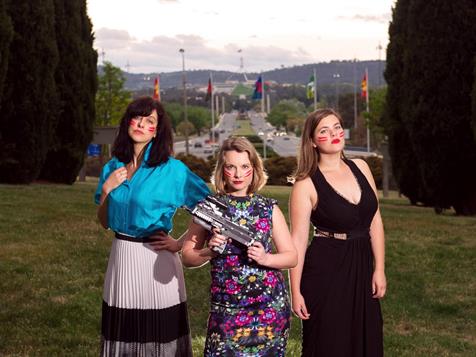 “Kill the Deniers” — All the wit and wisdom of government funded “arts”. Can’t persuade the voters? Shoot their representatives.

The Kill the Deniers e-book is coming:

…writer and theatre-maker whose work sits at the intersection of art and science, [David] Finnigan said Kill Climate Deniers grew out of discussions with Aspen Island Theatre Company’s Julian Hobba.

‘We got really interested in talking about the climate debate, and we were wondering why it was that in Australia the debate had stalled so badly; what is it about this country? And then we moved on to asking what would it take to shift the debate forward again – what would it actually take to generate real political change?’ said Finnigan.

Why did the debate stall? They could have done some research and asked skeptics. Instead…

The answer they came up with (‘though not one that I feel comfortable or very positive about,’ he stressed) was guns.

Subsequently, Finnigan wrote an action movie-style drama in which Parliament House is invaded by gun-toting eco-terrorists. With the Government held hostage, and facing the threat of imminent execution unless she ends global warming immediately, the embattled Environment Minister has no choice but to defend her ideals – one bullet at a time.

Because terrorism is fun, right?

‘It’s a really fun, really action-packed, really over the top hostage drama, and action film genre piece; and hanging from that are some really important questions about the climate debate,’ Finnigan said.

And the play inspires important questions

Questions like, why are Arty types so dysfunctional that they miss the obvious solution to solve their angst, and why are taxpayers forced to pay to amplify that dysfunction?

Here’s the lesson they missed in kindergarten. When the grown ups are discussing a problem, and a point of view is presented in full through TV, documentaries, drama, news, and two-week global junkets with forty thousand people, and yet despite all that more than half the grown ups are still not persuaded —  perhaps the message is stupid? Perhaps windfarms don’t slow cyclones, and solar panels won’t stop droughts?

Heretical thoughts for the tribal brain…

Here’s another heretical thought: perhaps emotional artistes are being played by big-money? Let’s explore that idea. What if Big Money was using the fools-for-tools tactic — the smart players are making cashola from carbon trading and renewables, respectively $176b and $300b industries. The Green vested interests are now a $1.5 trillion industrial complex. The clever self-serving players can push predictable fear-buttons in people who are not-good-with-big-numbers, who respond by feeling real angst, frustration and dismay. Those panicking pawns then convert that into shallow expressions of anger and fantasies of control through brute force. When will the government fund this expose?

Instead of fantasizing about killing the people who aren’t persuaded, maybe the Arts could ask hard questions, or even easy ones? It’s called introspection — either the message is not explained well enough, or the message is wrong. Here, instead of higher order creativity and inquiry, the government is funding groups who amplify base instincts of primitive unthinking anger and frustration. Some people might call it “art”, but others know it’s a flashed up sooky of a three-year-old.

Where are the real artists speaking up about this kind of fantasy terrorist trash? If the Arts community can’t condemn government funding for unresearched, low base, violent wet dreams about science policy, it’s time to kill off all government funding for Arts. Let ’em earn their money in the free market, and best of luck to Finnigan selling a hissy-spit as high art.

In my last post on “Kill the Deniers”, I satirized the satirist and mock-admired David Finningan’s uber-deep satirical approach — where the play is not “art”, his whole life is. Readers might prefer to imagine Finnigan as the skeptic playing a sick-small-minded artiste, who stays in character for years while he uses government funds to mock the entire Arts community and all government funded art. His statements admiring Chenchen terrorists really take the cake… (laugh til you cry). So if you prefer that approach, check out  Kill the Climate Deniers — taxes fund new “living satire” where writer plays paranoid believer admiring terrorists.

Let’s face it, if I had to satirize the utter indulgence and intellectual vacuum that is modern art, I couldn’t do it better than Finnigan.