Once upon a time, nearly everyone was environmental. After the first glorious Earth Day fully 78% used the term to describe themselves. Incredibly in 1991 just as many Republicans identified as environmentalists as Democrats did.  Now only 42% of all Americans would use the term.

The long term trend appears inescapable. The Republicans are about 20 years ahead. 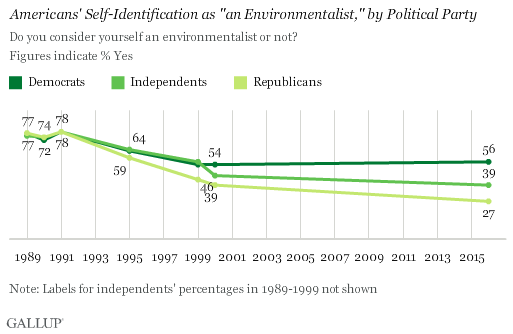 It’s been a quarter century of Great Global Warming politicization.  The trees, corals and cuddly polar bears have been worked on high rotation in the bun-fight for the tax-pie, profits, and dinner-party-status-points. Environmentalism came to mean something else.

The decline has happened across all age groups.

Source Gallup Poll : Results for this Gallup poll are based on telephone interviews conducted March 2-6, 2016, with a random sample of 1,019 adults, aged 18 and older, living in all 50 U.S. states and the District of Columbia.