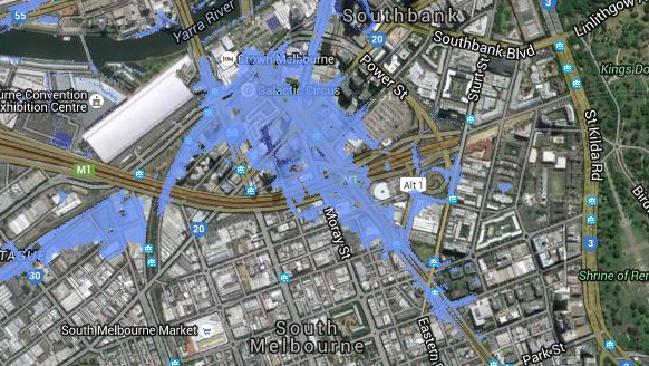 At the moment, there are only a few homes impacted by coastal flooding, high tides and storms but Mr Mallon said we needed to brace for a big spike.

“Tens of thousands of homes in Australia — meaning hundreds of millions of dollars in property — are under increasing threat,” he said.

You could say they’ve gone full mental with the fear factor — especially when global sea levels are rising at about 1mm a year (according to a thousand tide gauges). In Sydney, sea levels are streaking up even slower, at 0.6mm a year.

Changes in sea levels in Australia don’t fit the carbon meme too well. Sell up anyway.

Australian-NZ seas were changing as fast or even faster before World War II.

How many Australians? Seriously…

About 80 per cent of Australians who live near the coast could be the target of rising sea levels, which were predicted in a Climate Council report in 2014.

This is a continent of beach suburbs —  85% of Australians live within an hours drive of the beach.

More than $200 billion of our infrastructure could be at risk, with parts of the country suffering from more frequent, and severe, floods.

All light blue areas on the map show the parts of Australia most at risk of flooding.

Homeowners and investors will also be hugely impacted by rising sea levels.

Look out for psychic market forces:

Climate Valuation Project head Karl Mallon said unknown to most buyers and owners, there were suburbs in every state where houses were devalued due to climate change.

That’ll be all the buyers that devalue something for a factor they don’t know about.

“Extreme weather risk is rapidly driving up insurance premiums and insurers are already refusing to cover large parts of Australia,” he said.

Last time I looked, no one lived in large parts of Australia. But insurers would be wise to steer clear of flood plains below dams that use Tim Flannery Forecasting.

If insurance premiums are up it hasn’t got much to do with cyclones.

NGIS Australia set up the coastalrisks site — I see half their clients are government and they have a website designed for that market — lots of glossy pictures and otherwise not-functioning. Click a map: “This website is experiencing unusually high volume. We’ll let you know when we can fit you in”.

This site can’t cope with the traffic at 2:30am here in Perth, and 4:30am in Eastern Australia.