The media hype and the story of the false Penguin Panic 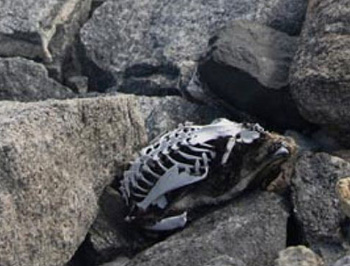 Much fuss was made of 150,000 missing penguins in Antarctica as if climate change had killed them. A monster iceberg had washed in, stopping the cute swimming tuxedos from getting to dinner and the colony of 160,000 suddenly shrank to 10,000. Where did all those penguins go? In previous tough times, when they could be tracked they just split up and went to different colonies.

Given that the penguins have survived repeated ice ages and warming for millions of years who would have thought that they would have a strategy for dealing with the odd big iceberg?

[Grist] Researchers found that a colony of Adélie penguins in Antartica’s Cape Denison has decreased from 160,000 to just 10,000 since 2011, when a huge iceberg ominously named B09B became grounded in nearby Commonwealth Bay. The penguins were once a short waddle from their food source, but the arrival of the iceberg — which is nearly the size of Rhode Island — has turned that jaunt into a 75-mile round trip. Talk about a long lunch.

Cry for those penguins:

“It’s eerily silent now,” expedition leader Chris Turney told The Sydney Morning Herald. He goes on to describe an alarmingly sedated — and depleted — community of penguins….  are clearly struggling. They can barely survive themselves, let alone hatch the next generation. We saw lots of dead birds on the ground …  it’s just heartbreaking to see.”

Credit to Becky Oskin at Live Science for unpacking the hype, getting two points of view and finding a researcher who knew something:

But there’s no proof yet that the birds are dead. No one has actually found 150,000 frozen penguins. In fact, experts think there’s a less horrific explanation for the missing birds: When the fishing gets tough, penguins simply pick up and move. It wouldn’t be the first time Adélie penguins marched to new digs. When an iceberg grounded in the southern Ross Sea in 2001, penguins on Ross Island relocated to nearby colonies until the ice broke up.

“Just because there are a lot fewer birds observed doesn’t automatically mean the ones that were there before have perished,” said Michelle LaRue, a penguin population researcher at the University of Minnesota in Minneapolis, who was not involved in the study. “They easily could have moved elsewhere, which would make sense if nearby colonies are thriving,” LaRue told Live Science in an email interview.

As for the dead birds, La Rue explained that there are always carcasses lying around Antarctica because it’s so cold and dry (they don’t decompose in the freezer so to speak). You might think an expert like Chris Turney might know that? It appears Eric Worrall, non-penguin-researcher, and not published at all in the peer review literature on Antarctica thought the non-migration of Penguins facing disaster was “ridiculous”. (WUWT)

So why the failure of so many “hard” journalists, Paul Homewood asks? He lays the blame at the feet of Chris Turney UNSW, who was one of the authors:

Why did pretty much all of them fall for the story and say the same thing?

After all, as they say, there was nothing in the paper itself to justify the scare, or for that matter the press release, which only carried the statement of the lead author, Kerry-Jayne Wilson.

So, step forward co-author, Chris Turney, leader of the Ship of Fools expedition which carried out the penguin count. He is quoted in the Sydney Morning Herald and other newspapers:

The Gullible Guardian and Grist and SMH would not get caught if they just did a bit more research. They might even seek out some skeptics to get a different point of view.

The Sydney Morning Herald led the panic, and a week later issued a quiet reassessment. How many SMH readers might still think that more solar panels could prevent mass penguin death? On Feb 12 the story was that a Giant iceberg could wipe out Adelie Penguin colony at Cape Denison, Antarctica. Chris Turney was interviewed at length, and we were told that as the planet warms things were going to get worse. But in the aftermath, writer Kim Arlington must have realized that Turney and Fogwill of UNSW were making her look a bit silly.  She wrote another article on Feb 23 with the sedate unsensational headline “Scientists assess icebergs impact on Adelie penguins.” There, Michael LaRue and his more sensible view are heard. Turney gets a paragraph and this time he suggests the birds are missing, and maybe at sea. There’s no mention of climate change or global warming. There’s also no mention of how misleading the first story was, though there is a link to it (which doesn’t work. Bad luck?).

The real news is being thrashed out on the web. No wonder subscriptions are not going well for the mainstream propaganda units.

The last word on penguins:

At the end of the day, Adelie penguins seem to do well in the warmth. One recent study found that their population size has increased by 135 fold since 14,000 years ago.  LaRue also points out there are 7 million Adélie penguins in Antarctica. They are not near extinction.

— Thanks to GWPF for the tip, to Lawrence Solomon for the story in the Financial Post.

The original study was published in Antarctic Science.