A very striking pattern of records is happening at the moment. Data is going “off the chart” on several factors at once.  As well as record high temperatures in the Northern Hemisphere in Feb 2016, the water is far cooler than usual in the Indo Pacific, while there is increased water vapor and cloud all over the world’s oceans. But windspeeds are slow, slow, slow. It has the hallmarks of a very Big El Nino. Bigger by many measures than 1997-98.

P Gosselin at NotricksZone has got some very interesting graphs about the ocean around the vast Western Pacific.  Frank Bosse and Prof. Fritz Vahrenholt noticed  that ARGO buoys are recording a very unusual cooling in the Indo-Pacific Western Pacific.

Is something fishy and odd going on there? Hard to say, but while the globe set a record last month, it is interesting to know that over the last couple of years temperatures have declined in the Western Pacific by a whole degree.  The Indo-Pacific Warm Pool (IPWP) covers 20N to 20S across a full quarter of the circumference of the Earth. According to Bosse and Vahrenholt it’s around “16 million cubic kilometers“.

The blue blob in 2016 in the graph below looks smallish (right hand side), but it represents a large section of the Earth. And the temperature of the IPWP has dropped 1°C since early 2013. Smaller hints of blue blobs occur briefly in 2006-7 and 2009-10, both during small El-Ninos. Is the current cool pool just a big “El Nino” phenomenon? I wish we had data from 1997-98 to compare.

So there is a very large pool of subsurface water that’s cooler than usual across this large slab of water. Bill Kininmonth gave the best description I’ve yet seen on how the world changes during an El Nino. Our oceans are mostly deep and cold — they average 4km deep and most of that is near freezing. Even under the topics the water is only 4C. Above that rests a thin warm top layer which is pushed around by the winds. In an El Nino the trade winds across the Pacific slow down and that keeps the warmer water near the surface of the central Pacific instead of pushing that warm water right across to the Western Indo-Pacific. In a La Nina the extra winds push the warm water far westward, and there is an upwelling of the vast cold pool on the Eastern side of the Pacific. Fingers of cold water reach the surface and draw down the heat from the air above. Think of that massive abyssal cold volume that can reach up and suck the heat out of the sky. That’s why temperatures swing globally.

See the blue cold water in the Indo-Pacific? The scientists who tell us that the February heat records are due to man-made climate change are effectively saying that the cold pool in the IPWP is due to CO2 10,000m above. Follow the chain… cry for cause and effect. (dbar = decibar, and I calculate 100 dbar as about 100 meters, 200 dbar as about 200 meters, and 500 dbar as about 500 meters at the equator.) 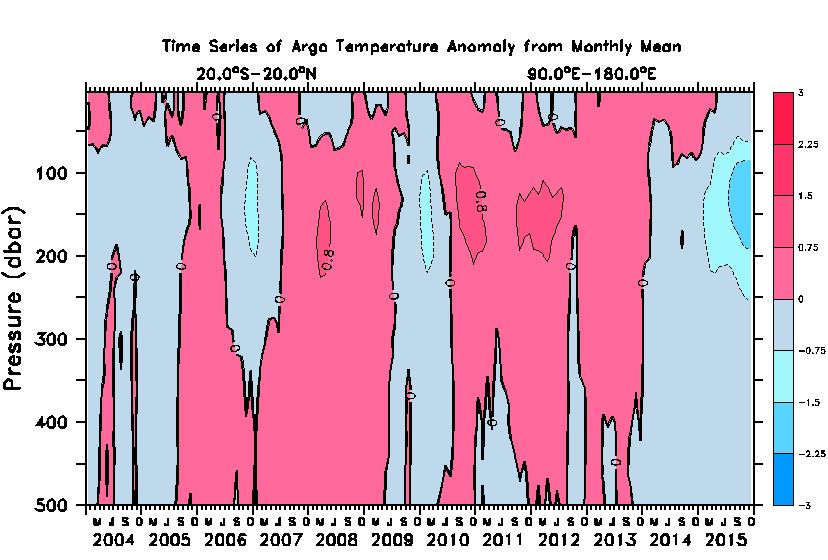 I don’t know how record breakingly extraordinary it is for the warm-pool to be a cool-pool, because our records with this much detail are so short. But we know Global Climate Models can not predict this. Where are the real scientists who are reminding their colleagues that an El Nino is not man-made?

What’s going on with Water Vapor?

Roy Spencer reports that humidity is very high over the Pacific — remarkably high. Wow, that’s a spike and this graph is the monster vast 60N – 60S across the whole world’s oceans. 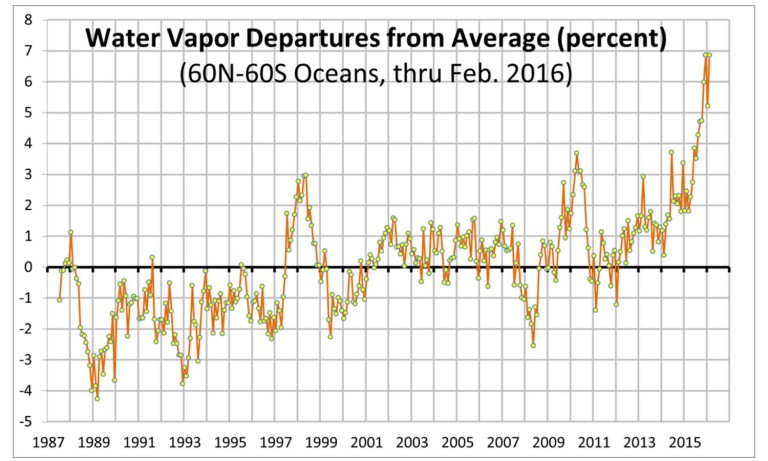 It makes sense that if the warm pool of water is not being stirred by winds into the deep cold water, that we would see higher water vapor over the top of it. Interestingly this is so much higher than the 97-98 El Nino.

Back to the current record breaking action.

…because the winds are very slow

Again, thanks to Roy Spencer — we can see the winds are slower than in the 97-98 El Nino, but it has been as slow in late 87 and late 89. How does the last 30 years compare to the 100 before that? (Data, data, I want more data.) The average line here might not be representative of the real long term average at all. 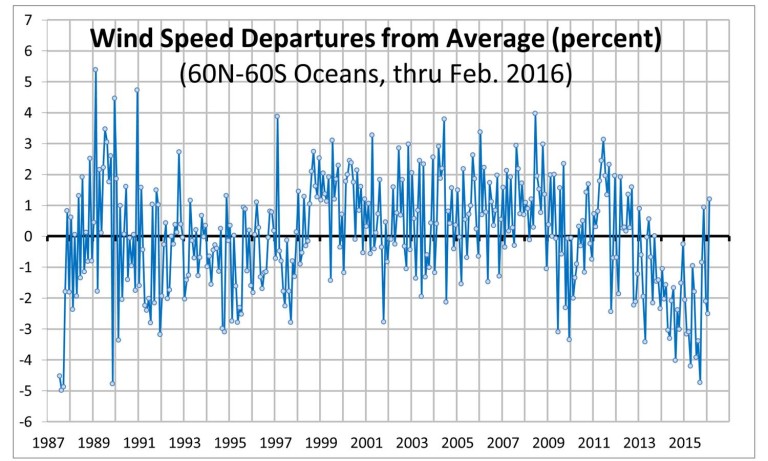 Bottom line – this is a Big El Nino, it’s noise, not global warming

What we have at the moment is a record breaking El Nino. (But it may not be very record breaking if only we had this kind of data for earlier El Nino’s). What does this tell us about the Pause? I don’t know — perhaps it’s over, perhaps it’s not. February is noise, not signal.We can’t tell until we see what happens in a couple of year’s time. Perhaps this is a big shift? Perhaps a spike. History will tell.

See Roy Spencer’s blog for more graphs and an interesting difference with 1998 – where there was a cool ring in the Pacific around the “hot” blob, and that circle of cold is not present this year. Who knows why? Stephen Wilde suggests it is due to the “wavier” jet streams we have now (which may in turn be due to the strange solar activity we have now compared to 1997-98). See Wilde’s post here for more info about those extended jet stream waves which stretch far south and north when the solar activity is low.

Roy Spencer: “The total cloud water anomaly for February was also at a record high, at 13% above average”

Looking at the wind graph, perhaps there is an explanation for the Pause (which has been suggested among the 50 odd excuses) — perhaps wind speeds have been higher than normal for the last 18 years which has “stirred in the heat”. That’s why I ask about the long term average. We just don’t know from this graph.

EXTRA Tidbit:  For those who are interested, the Western Pacific pours out around Indonesia into the Indian Ocean. It’s a pretty big deal for us Western Australians. We end up with that warm water running down along the coast past Perth. It’s why the most southern corals in the world grow around the island off the coast here at 32S.