The headlines are out, telling us the unnerving news that the climate has changed, “zones are on the march”. How ominous.

Too-tricky graphs show how different everything is in the last 16 years “compared to the 99 before that”. But since our weather comes in cycles of 30, 60 or 200 years, as well as longer ones, almost any 16 year period is likely to be not the average of the century beforehand. Thus this technique can be applied to any noisy cyclical dataset as a Handy Headline Generator.

It’s a tad shameless to present it as if it means something given our short knowledge of the Australian climate and the hyper variability within. You’d think our last century had a constant climate, then there was a “shift”. Spot the hockeystick? 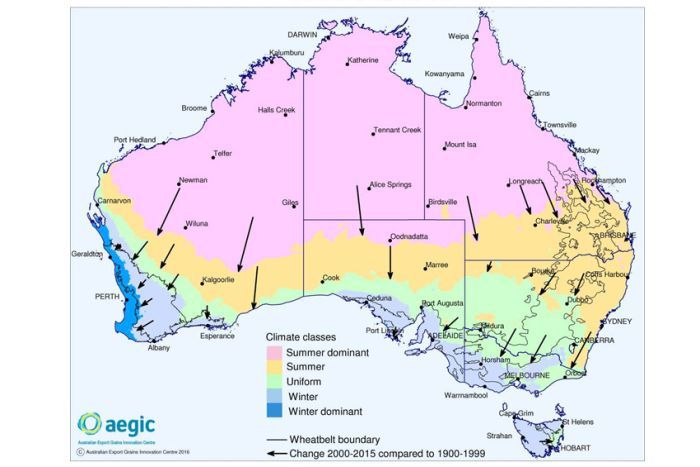 Is someone graphing noise?

In thousands of kilometers across the pink “summer dominant” areas of central Australia, it might rain more in summer, but it mostly doesn’t rain at all and when it does rain properly, it’s once in a decade. See Alice Springs in January. How’s that for noise? Did a remnant cyclone rain on Alice this year?

How do we spot this zone “moving” — with a Ouija board? 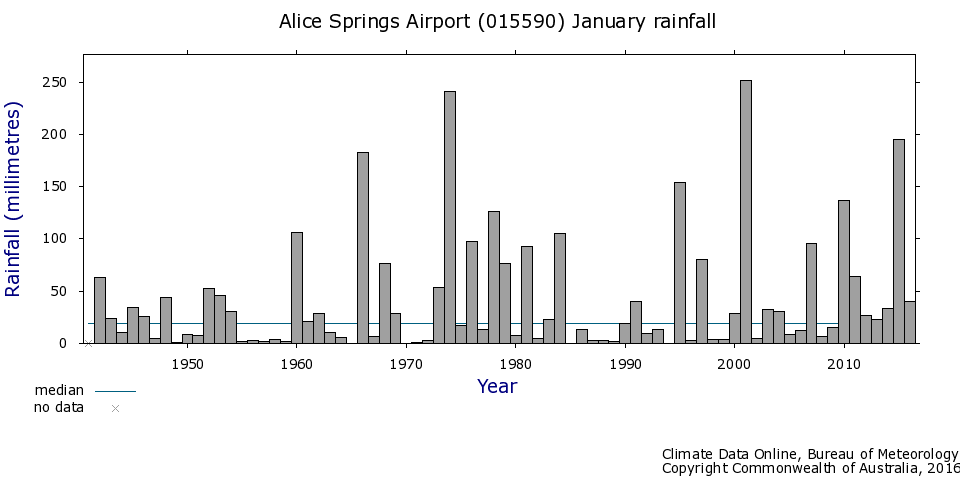 Here’s the winter rain across Australia — look at the whipsaw — to see a real shift in the Australian climate we’d need a lot more data to deal with the noise.

The flatter part recently looks a bit like the 1920s and 30s. Is it really a new climate, or just a cycle in the old one? If it has changed, how do we know it’s not due to land clearance, or some other factor? 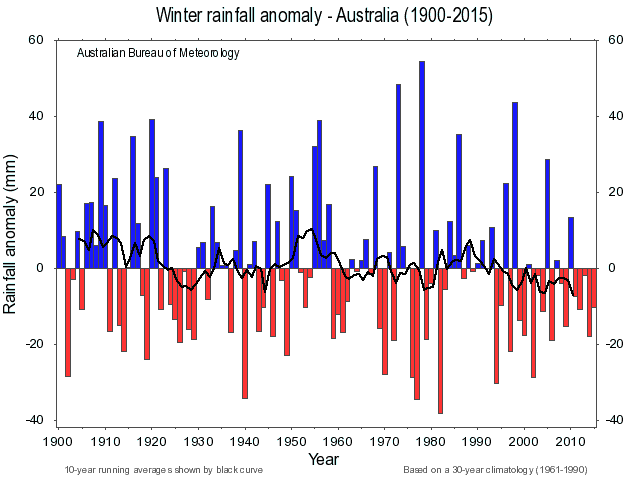 About the only area that appears to show a trend is winter in South West WA and some bumper summer rain across the top half. The trend in SW WA seems ot be partly due to land clearing, (See do forests drive wind and rain?). Otherwise, check the cycles for yourself, there’s nothing that unusual going on in the Winter Rain in the Murray Darlin Basin, Tasmania, South Australia, Queensland and Eastern Australia. Rain goes up and down.

If you do enough permutations of months, years, seasons and regions, there’s bound to be a few with slopes.

Dr Stephens said the new analysis revealed striking changes to the Australian climate over the past 16 years.

“Since 2000, there has been a general increase in summer rainfall across Australia, and a corresponding decrease in winter rainfall, leading to shifts in rainfall zones extending for hundreds of kilometres,” Dr Stephens said.

“Rainfall between May to October over much of the heavily populated regions of southern Australia has decreased 10-30%, while summer rain has increased up to 40% in some areas.

“This change in climate has major implications for farming and pastoral systems as the profitability of different crop types changes, disease risk changes, and the composition of rangeland grasses changes with stocking rates.”