A remarkable tribute, composed, scored, and performed on a grand piano. I did not know there was such a thing as a clock tune. The things we learn when we work with polymaths…   — Jo

By Christopher Monckton of Brenchley

The generous businessman who sponsored the successful case against Al Gore’s sci-fi comedy horror movie An Inconvenient Truth in the London High Court in 2007 contacted me recently to say we should take steps to honor the memory of the late Bob Carter, whose testimony alongside that of Dick Lindzen was decisive in defeating Her Majesty’s Government and obliging it to circulate 77 pages of corrective guidance to every school in England before the movie could be shown there. 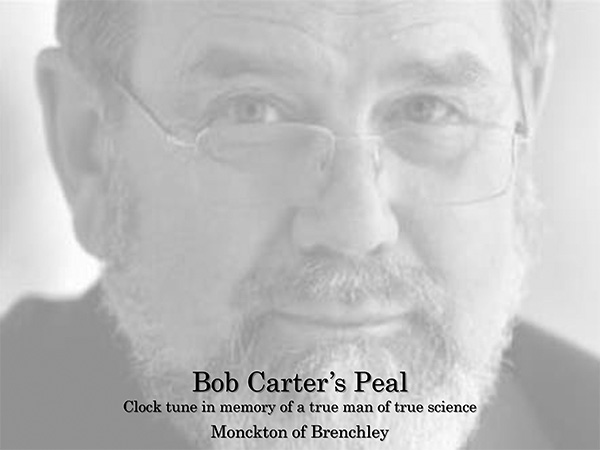 I have many good reasons to be grateful to Bob Carter. On my first speaking tour of Australia I was recovering from 20 years’ grave illness and it was not clear that I’d be fit enough to survive the month-long tour. Bob Carter shared with Ian Plimer the task of serving as my warm-up act. Both were ready to step in and take over if my health failed.

Then and often thereafter, I came to know and love Bob and his wife Anne, both of whom were the soul of gentleness, kindness and truth.

Bob was visibly saddened by the shameful and mendacious abandonment of any semblance of scientific rigor or method on the part of so many academic colleagues when it came to the profitable scam that is “global warming”.

More than any of us, he felt the totalitarians’ sullen, vicious assault on science and reason personally. He was wounded by it. Often and often he agonized over how men of science could have sunk so low.

Yet he remained generally cheerful, and was the sharpest brain and the clearest voice of sanity and reason against the Green Blob. His talks were models of clarity, incision and wit.

That great man was treated with bitchy pettiness by his university in his closing years, solely because he refused to be Assimilated by the Borg. In an act of extreme childishness, his right to use his own university’s library was summarily removed.

Click to down the full sheet music in PDF.

And the poisonous totalitarians who have all but silenced free speech worldwide on the climate issue by their vile personal attacks on any who dare to speak out against the Party Line could not let Bob Carter alone even in death. A number of disfiguringly spiteful attacks on him have been published.

The truth is that Bob Carter made Them uneasy. His assertions of the truth were so clear, so difficult for Them to challenge, that They came to fear him, and – as is usual with Their wretched kind – with fear came hatred.

I had the privilege of spending two weeks in Paris with Bob at the U.N. climate gabfest. One of the hate-speakers in the soulless le Bourget conference center, seeing me pass by, said, “All we have to do is wait. You’re all old. You’ll all die. And what you stood for will be forgotten. And we’ll have won.”

How ironic that, after that remark, Bob Carter should have been taken from us so soon after the Paris nonsense ended.

What then, is to be done to remember that great man? Well, just about the last thing I heard him say was that he liked my piano-playing in the foyer of the Hotel California, just off the Champs Elysees, where the skeptics were all staying.

In the German-speaking princedoms of Baroque Europe, by an elegant custom, composers honoured the dead by composing clock-tunes in their honor. These clock-tunes – or Turmuhrglockenspielmelodie – can be heard to this day from clock-towers all over Germany and Austria, ringing out their merriment every quarter of an hour.

I have decided to revive that charming tradition of recalling those in eternity by counting the hours that no longer imprison them. I have composed a clock-tune in Bob’s memory, and as a very small mark of gratitude for his unfailing kindnesses to me and my lovely wife.

The usual Classical rule for clock-tunes is that the quarter-hour tune should state the theme in a simple form; that the half-hour and three-quarter tunes – respectively twice and thrice the length of the quarter-tune – should elaborate upon it; and that the three tunes should be chimed in continuous succession for the hour, with perhaps a short cadenza at the end.

Concert performances generally follow this pattern, as does the recording here. The .mp3 file, professionally recorded on a 9ft Shiguro Kawai concert grand, and the score.

At the rising of the sun and at its setting, we will remember him.

These have kept coming in since I did the first tribute post.

“In this presentation, he also emphasised the importance of the scientific method. “To the extent that it is possible for any human endeavour to be so, science is value-free. Science is a way of attempting to understand the world in which we live from a rational point of view, based on observation, experiment and tested theory. Irritatingly, especially for governments, science does not operate by con­sensus and it is often best progres­sed by mavericks. The alternat­ive to a scientific approach is one based on super­stition, phobia, religion or politics.”” [A quote from December 2003]

In the preface to his first book Climate: The Counter Consensus, he encouraged us all to “trust authority less and our own brains more” as we assessed the likely dangers of both known natural and hypothetical human-caused global climate change. Chapter 11 of this book outlined the real and present dangers posed by natural climate change. We are reminded of 1816, known as “the year without a summer” for its intense cold associated with both the Dalton solar minimum and a super-eruption of the Indonesian volcano Tambora.

— Read it all on her blog

Bob Carter was a great man. His  greatness was located in something that we all recognized;  his intelligent courage ,perceptive kindness and an exuberant  love of life.
Here was a man who showed everyone  how to stand  up to bullying  and cowardly malice with elegant dignity.
I think  he understood  human weakness  without cynicism but he was baffled  by the evasiveness of his opponents  in the climate debate. How could they not see the truth,  and why wouldn’t  they face him openly? He felt that tribal allegiance  or group  think anxiety were at the heart of  what passes for thought in our society .
Ingrida and  I are grateful to have called Bob and Anne our friends. A conversation with Bob could range from politics to science  and fine art. He always had sympathetic care for family life. In fact he seemed to have a loving embrace  for us all. He will be missed dreadfully by all who knew him. Our sincere commiserations to Anne and family, from John and Ingrida Spooner.

I next met Bob at a conference in early 2008, and during our conversation he said something that impressed me greatly. He told me that after the climate change debate had opened, he vowed that he would make no contribution to it unless and until he had satisfied himself that he had achieved sufficient understanding of the scientific issues involved. He then asked me: ‘How long do you think it took before I felt I was qualified to express views of my own?’ As an offhand guess which seemed reasonable, I replied: ‘Six months?’ ‘No’, said Bob, ‘it took me three years’ work.’

Bob Carter – what a great professional and personal loss for so many of us AGW critics with the news of the death of Bob Carter.  Bob gave so much of himself in recent years to holding the line against the false arguments and propaganda that has been so extensively advanced by global warming advocates.  We should all admire Bob’s courage and his insightful climate understanding which he so skillfully brought to bear to up-hold the integrity of science.  He leaves behind a most admirable legacy which will continue to inspire me and I’m sure many others to keep up our efforts to bring truth to the warming question….

Unlike many in the climate debate, Carter never lost his humility or resorted to the sort of attacks we see every day in the climate fight. Professor Chris de Freitas of the School of Environment at the University of Auckland comments:

“Bob Carter was a scholar of the highest order and a committed, indefatigable defender of honest science reporting in the climate change debate. He was a true gentleman who never descended to ad hominem attacks on those who disagreed with him.”

“…what struck me immediately about Bob was the way he could put the most complex scientific questions into understandable terms. The other thing that hit me was his passion. He was passionate about science, about communicating about science, and about the benefits that science could bring to humanity. As is so often the case, the most passionate people are the most enthusiastic and most cheerful, and Bob was no exception. Bob’s passion, enthusiasm, and cheerfulness was infectious.”

The first time I heard him speak… Bob’s manner and arguments that day convinced me the media wasn’t doing a proper job. A public that has heard Al Gore’s climate views but not Bob Carter’s is a public that has been spectacularly ill-informed.

I have little patience for sentimentality and for the glib, fake praise that’s too often uttered at funerals. But Bob really was an extraordinary human being. Quietly leading by example, he blessed our lives.