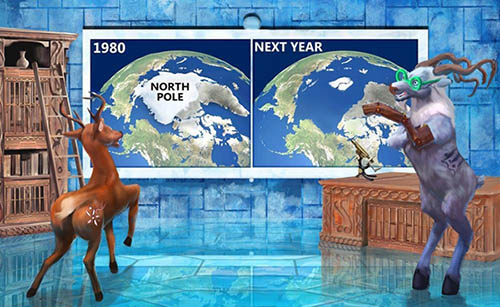 What could make climate change more real for the kiddies than to get rid of Santa and drown the deer. No more presents, little ones!

Inspiration from  Tim Blair. who writes: If you enjoy making small children cry – and who doesn’t? – then Fairfax has the perfect Christmas gift idea.

An Australian scientist has written a new children’s book, just in time for Christmas, that weaves the impacts of climate change into a story about Santa Claus, his reindeers and an evil billionaire.

Because billionaires are always evil. It’s important to teach kids that only nasty people get rich.

Author Dr Ian Irvine, who has been a scientist for over three decades, first came up with the idea of marrying Christmas and climate change together for his eBook The Last Christmas, The North Pole is melting! two years ago.

Dr Ian Irvine is a specialist in the management of sediments, which may explain why he doesn’t seem up to date with sea ice trends.

“The ice at the North Pole isn’t very thick and over the last 30 years or so it has been getting a lot thinner, it is shrinking.

“It used to cover millions of square kilometres but now there is much less than that because of climate change.”

The story focuses on the littlest reindeer, Vixen, and her challenge to save Santa’s village and workshop from billionaire villain Mr Sneer who wants to steal Christmas for himself. In the background of the story, the ice at the North Pole slowly melts away.

Awkwardly the ice in the Arctic is not going along with the scare program. It’s only slightly below average for this time of year.

But don’t let the facts get in the way:

Tell the kiddies that somehow Santa and the reindeer survived 1959 when submarines from the US Navy surfaced at the North Pole. (They even did it in winter too).

You can read excerpts here, where Vixen, Dancer and what not struggle through predictable sentence structure and plodding conversation.