Who would have thought that temperature stations near concrete are warming faster than those over grass?

Anthony Watts carefully analyzed all 1,218 surface stations in the USA and  managed to find 410 good ones in the last 35 years (1979 onwards) — which is an achievement in itself.  But the real point of his paper is to see if the best stations show less warming than the rest. (The good ones are the ones that are not near artificial heat sources, and haven’t been moved around). Watts finds (again) that  the NOAA homogenisation practice appears to be adjusting the good stations up to the bad ones.

Watts presents it today at the AGU 2015 conference.

Congratulations to Anthony Watts for what must have been a mammoth amount of work. The irony is that the conclusion — that hot air radiates or rises off concrete, asphalt, and from bricks affects thermometers is banal, yet so few can demonstrate it across such a big network. We have to wonder why no one else was looking… Maybe the Earth’s climate doesn’t matter that much to NOAA? – Jo

SAN FRANCISO, CA – A new study about the surface temperature record presented at the 2015 Fall Meeting of the American Geophysical Union suggests that the 30-year trend of temperatures for the Continental United States (CONUS) since 1979 are about two thirds as strong as officially NOAA temperature trends.

Using NOAA’s U.S. Historical Climatology Network, which comprises 1218 weather stations in the CONUS, the researchers were able to identify a 410 station subset of “unperturbed” stations that have not been moved, had equipment changes, or changes in time of observations, and thus require no “adjustments” to their temperature record to account for these problems. The study focuses on finding trend differences between well sited and poorly sited weather stations, based on a WMO approved metric Leroy (2010)1 for classification and assessment of the quality of the measurements based on proximity to artificial heat sources and heat sinks which affect temperature measurement. An example is shown in Figure 2 below, showing the NOAA USHCN temperature sensor for Ardmore, OK. 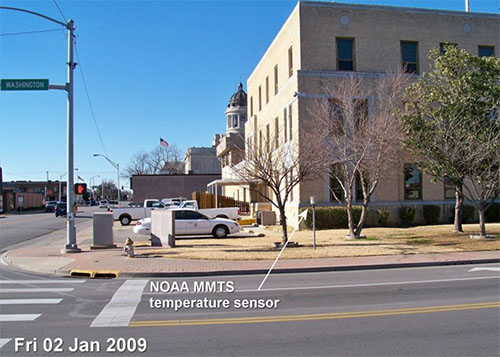 Figure 2 – USHCN Temperature sensor located on street corner in Ardmore, OK in full viewshed of multiple heatsinks. Following up on a paper published by the authors in 2010, Analysis of the impacts of station exposure on the U.S.  Historical Climatology Network temperatures and temperature trends2 which concluded:

A 410-station subset of U.S. Historical Climatology Network (version 2.5) stations is identified that experienced no changes in time of observation or station moves during the 1979-2008 period. These stations are classified based on proximity to artificial surfaces, buildings, and other such objects with unnatural thermal mass using guidelines established by Leroy (2010)1 . The United States temperature trends estimated from the relatively few stations in the classes with minimal artificial impact are found to be collectively about 2/3 as large as US trends estimated in the classes with greater expected artificial impact. The trend differences are largest for minimum temperatures and are statistically significant even at the regional scale and across different types of instrumentation and degrees of urbanization. The homogeneity adjustments applied by the National Centers for Environmental Information (formerly the National Climatic Data Center) greatly reduce those differences but produce trends that are more consistent with the stations with greater expected artificial impact. Trend differences are not found during the 1999- 2008 subperiod of relatively stable temperatures, suggesting that the observed differences are caused by a physical mechanism that is directly or indirectly caused by changing temperatures.

The study is authored by Anthony Watts and Evan Jones of surfacestations.org , John Nielsen-Gammon of Texas A&M , John R. Christy of the University of Alabama, Huntsville and represents years of work in studying the quality of the temperature measurement system of the United States.

“The majority of weather stations used by NOAA to detect climate change temperature signal have been compromised by encroachment of artificial surfaces like concrete, asphalt, and heat sources like air conditioner exhausts. This study demonstrates conclusively that this issue affects temperature trend and that NOAA’s methods are not correcting for this problem, resulting in an inflated temperature trend. It suggests that the trend for U.S. temperature will need to be corrected.” He added: “We also see evidence of this same sort of siting problem around the world at many other official weather stations, suggesting that the same upward bias on trend also manifests itself in the global temperature record”.

The full AGU presentation can be downloaded here: https://goo.gl/7NcvT2