The  Australian Bureau of Meteorology have been struck by the most incredible bad luck. The fickle thermometers of Australia have been ruining climate records for 150 years, and the BOM have done a masterful job of recreating our “correct” climate trends, despite the data. Bob Fernley-Jones decided to help show the world how clever the BOM are. (Call them the Bureau of Magic).

Firstly there were the Horoscope-thermometers — which need adjustments that are different for each calendar month of the year — up in December, down in January, up in February… These thermometers flip on Jan 1 each year from reading nearly 1°C too warm all of December, to being more than 1°C too cold for all of January . Then come February 1, they flip again. Somehow the BOM managed to unravel this bizarre pattern (cue X-files music) and figure out exactly what anti-horoscope-adjustments to use (and they were different in every city). Modestly the BOM did not explain to the public how clever their adjustments were; despite their $300m budget, it took volunteer Bob Fernley-Jones to reverse out the Special Horoscope Cure, and find the square wave algorithm that repaired our damaged climate records. Lucky for the BOM it’s all laid out below.  😉

Fernley-Jones had a theory that the best thermometers were in our biggest, richest capital cities. Instead he found fickle unreliable thermometers everywhere. Adjustments didn’t line up with the times the stations had moved. Sometimes the maxima step changed, but not the minima. It was as if the Bermuda Triangle rolled through the data. I asked Bob to tell me the best stations (the BOM would want to know). He laughed. Below he continues his exhaustive, diligent analysis of rural stations and finds the same old mess as he saw in the capital cities.

And on it goes. Hours of work. Bob Fernley-Jones does a special kind of graph  which packs in 30,000 data points, looks a bit scary, but don’t be put off, the natural noise is easy to tell apart from those sharp man-made step changes. In a normal world there would be just as many step-downs as step-ups as adjustments went both ways, there would also be reasons for the steps (pah!). In a warming world where an ocean of concrete and bricks had been built near thermometers, the adjustments would step down to compensate, as those lines tracked from left to right across the page (but they don’t seem to).

We owe a big thank you to the tireless work of Bob and others who are holding our public “servants” to account. The message in here is that the rural stations are just as bad as the city ones, and that bizarre inexplicable adjustments are everywhere. See Bob’s table at the end for the meanings of the notes on the graphs.   —  Jo

This is Part 3 of a series of studies that investigates the credibility of the Australian Bureau of Meteorology (BoM) homogenizes surface temperature records.   Before this, Part 1 covered six State or Territory capital cities in the expectation that those stations had the best resources and robustness in long-term record keeping.  Unfortunately, even these iconics were not found to meet the institutional claim of “World’s Best Practice”.

That aside, it is now time for a wider look and comparison with some long-record rural sites where the Urban Heat Island (UHI) effect, as it is well recognised in big cities, is generally not a complication.  To avoid any suggestions of cherry-picking, a greater number of twenty-four rural sites are herewith exposed.  Also briefly considered within the total 112 ACORN sites are those with relatively recent start-up dates. (17% are short-record sites with an average of only about 59 years timespan through 2014, not the proper full 104-years that the Bureau claims to cover since 1910).

Importantly, this report summary, compiled from almost 80 megabytes of data, is NOT about the methodology that the BoM has used in its homogenization (or any “climate change” theories).  Instead it is simply a test for reasonableness in the Bureau’s resultant “corrected” DATA over that of their currently published “raw data”, (regardless of HOW they got there).  By raw is meant those recently retained records at the BoM website; ‘Climate Data Online’ (CDO).  (Although in six of the examples to follow, whilst ACORN data is present online, the CDO daily information upon which it is believed to be based is not available online!).

The BoM homogenised data are officially known under the acronym; ACORN – SAT (abbreviated to ACORN here).  In order to explore any anomalies in the quality of that data the methodology used was to electronically subtract the downloaded CDO daily data from ACORN and then chart their differences for visual comprehension of any strange patterns therein.  The software employed was the widely accepted Microsoft EXCEL.

In firstly revisiting the Melbourne chart, it serves several purposes including that it is visually  less complex than most rural station charts that follow, but is useful as an introduction to what are rather unusual graphics.  Perhaps most unique is that daily data spanning >100 years, (or about 38,000 data points), are compressed across a single page width.  There are consequential limitations in pixel definition and visual clarity, but nevertheless annual cycles are generally evident, and, in some cases, in the later charts some selected details are expanded in scale for improved definition.

NOTE:  In these charts, ‘anomalies’ are meant in the sense of incongruous outcomes in the differences obtained after subtraction of CDO (raw) temperatures from the ACORN (“homogenized”) temperatures.

History from the ACORN catalogue:  The current site is located on the grounds of the Post Office in the town centre, over lawn with a concrete path nearby and a number of buildings within 20 m. History:  There was a small move (10 m) in November 1935. The screen was replaced in January 1942 and in January 1998.

This 104 year-long single station record is one of the “World-Class-Quality” 112 ACORN sites.  It was selected for having multiple concerns, although they are not individually the most extreme out of the examples to be revealed later.

These issues should not be found at even a single station in ACORN’s tax-payer funded “World’s Best Practice”.

History from the ACORN catalogue: The original site (076077) was within the Mildura town area. It moved in August 1927. After this move the screen was oriented northeast, but it was realigned to face south in July 1933. There was a small site move in March 1943. Temperature observations continued until 1949. Observations have been made at the airport site (076031) since 1946. Site moves took place on 11 August 1992 (from the aerodrome apron to the Meteorological Office) and in July 1989 (only a small move). The automatic weather station was installed on 1 October 1989, and became the primary instrument on 1 November 1996. There was rapid development of irrigated agriculture in the Mildura region in the period between the two World Wars, and this appears to be associated with an anomalous cooling trend in maximum temperature at Mildura over this period (amounting to 0.3–0.4°C over 30 years). The non-ACORN-SAT site of Griffith, which has a similar history of irrigation development, shows a similar trend.

History from the ACORN catalogue:  The site has had a number of moves over time. There is evidence of a move in November 1944 and a small move in 1960. A 500 m move to the southwest occurred in August 1980, and there is evidence of a move of a few metres some time between 1981 and 1984. There were moves of a few metres in September 1994 and of 15 m to the south in July 1996, to place the screen away from areas of bluestone landscaping and concrete, although neither move has had a significant impact on the observations. Minimum temperatures at Tibooburra suffered from persistent problems (most likely instrument faults) in the 1940s and most 1941–1949 minimum temperature.

This chart spans some 38,000 daily data points across a mere page width and consequently the limited pixel definition misleadingly results in apparent mass blocks of colour at ①&②.   Thus a clarifying expanded detail view is provided to the right in this image.

This long series single site record does not pass the ‘test for reasonableness’, particularly before 1960, and surely cannot conform to “World’s Best Practice”.

Fig 4)  Cairns: Every station is unique in its data!

Cairns history from the ACORN catalogue: The original site was at the Cairns Post Office (031010), within the town area. There is a documented move in December 1929 from a relatively enclosed site to a slightly more open one. Observations continued at the Post Office until 1953. Observations have been made at the airport (031011) since 1943. In December 1992 the site moved 1.5 km northwest (to the other side of the runway). Comparisons of the data with neighbours suggest that this move had no significant effect on temperatures. An automatic weather station was installed at this time and became the primary instrument on 1 November 1996

This site record and the associated BoM practices do not conform to a credible claim of “World’s Best Practice”.

History from the ACORN catalogue: The site has been within the township since it was established. It moved in August 1932, June 1956 and June 1957; the latter placed it in a yard within a built-up area which was cluttered from time to time. The screen was noted as being incorrectly oriented in November 1945 and again in February 1968. The site moved 1 km north to its current location on 18 January 2000.

History from the ACORN catalogue: The original site (009500) had several locations in the town. The site moved in May 1913, February 1916 (unconfirmed), 1925 and 1950 (only a small move). Observations commenced at the airport site (009741) in April 1965. There were no overlapping observations at the time. However, in 2002 a site was re-established near the former town site and using its number, and the post-2002 observations have been used to estimate suitable adjustments for the 1965 move. There has been one known move since the site has been located at the airport, 150 m to the northeast on 4 August 1992. An automatic weather station was installed at this time and became the primary instrument on 1 November 1996.

How can we be confident of our BoM in claiming its ACORN sites and practices are “World’s Best Practice”?

Summary comments on the long-record charts:

The focus of this study has been on rural stations having long records, mainly because the BoM homogenisation process has greatest relevance the older the data is.  Preference has also been for single station sites for ease of process, but there are many stations of one name but which are actually multiple stations merged together, (commonly originally in-town location/s then moving to outlying airport location/s).  There are also a significant number of ACORN stations with short records (E.G. 17% are with start-up dates between 1950 to 1975).   Some of these are likely to have effectively no researchable data online because CDO is typically the same as ACORN over those shorter terms.  Unfortunately to fully confirm this would be labour intensive and beyond my current intentions.

So….. back to our twenty-one long-record rural sites…..  They have a great variety of non-credible data, sometimes of an astonishing nature, as is summarised in Table 1.    It includes some subjective assessments, unlike the data itself in the charts, and there may be transcription errors despite repeated proofing. There are so many issues that it is too unwieldy to elaborate detailed conclusions:

This table is available as a Document.docx and a PDF version. 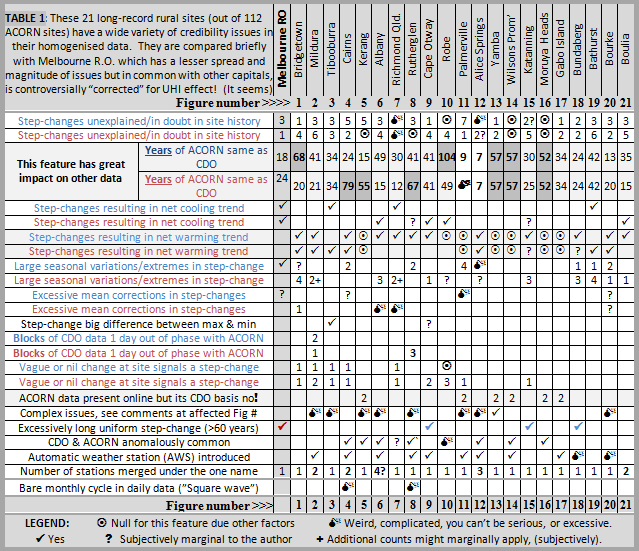 A controversial aspect that has been debated elsewhere is that the adding of new ACORN short-record stations* in hotter regions has resulted in exaggeration of recent warming trends.  On the other hand, there are many abandoned older sites, (commonly at retired institutions such as Post Offices), which ought to be of importance in improving sample size for the declared objectives behind ACORN.  However, prima facie this seems to have been seriously neglected by the Bureau.

Part 1 of this series (subtitled;  A tale of Six Cities)

I’m a retired mechanical engineer with no past or present funding for my subject research from anyone. (Or interests other than in wanting proper scientific integrity and effective use of government funding in science).