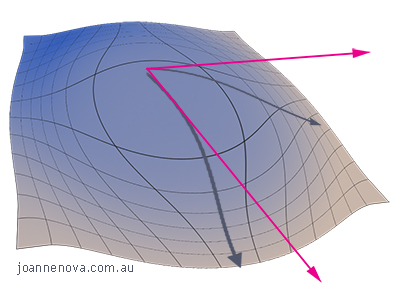 And so begins the list of errors. The conventional basic climate model (see post 1 for why it is important, post2 and post 3 for what it is) is based on partial derivatives of dependent variables, and that’s a No No. Let me explain: effectively basic climate models model a hypothetical world where all things freeze in a constant state while one factor doubles.* But in the real world, many variables are changing simultaneously and the rules are  different.

Partial differentials of dependent variables is a wildcard — it may produce an OK estimate sometimes, but other times it produces nonsense, and ominously, there is effectively no way to test. If the basic climate models predicted the climate, we’d know they got away with it. They didn’t, but we can’t say if they failed because of a partial derivative. It could have been something else. We just know it’s bad practice.

To see an example of how partial differentials can produce quixotic contradictions in a normal and simple situation, see what happens when they are used with the Ideal Gas Law in this PDF from MIT.

Partial derivatives are useful when there are only independent variables. But in the climate paradox, there are a lot of variables and most of them are dependent. Partial derivatives might work, or they might blow up. For them to make sense we’d need to live in a world which can be held in a constant steady state while one factor does a step change. It’s a situation that probably hasn’t happened in the last 4.5 billion years.

The field of climate science draws on maths, but rarely draws on the leading mathematical minds. This first error of the three illustrates how people who may be well trained in geography or oceanography (or divinity) can miss points that professional mathematicians and modelers would not.

The big problem here is that a model built on the misuse of a basic maths technique that cannot be tested, should not ever, as in never, be described as 95% certain.  Resting a theory on unverifiable and hypothetical quantities is asking for trouble. Hey but it’s only the future of the planet that’s at stake. If it were something more important, climate scientists would have brought in some serious maths guys.

This error is fairly easy to describe; the harder, bigger errors are coming soon, as we try to roll out the points as fast as we can. — Jo

By the way, noting that there are problems with the conventional model is hardly new even in establishment circles, but apparently itemizing them is a little unusual. For example, Sherwood et. al said in 2015 [1]: “While the forcing–feedback paradigm has always been recognized as imperfect, such discrepancies have previously been attributed to variations in “efficacy” (Hansen et al. 1984), which did not clarify their nature.”

The basic model relies heavily on partial derivatives. A partial derivative is the ratio of the changes in two variables, when everything apart from those two variables is held constant. When applied to the climate, this means everything about the climate must be held constant while we imagine how much one variable would change if the other was altered.

For example, how does changing the surface temperature affect how much heat is radiated to space (the outgoing longwave radiation, or OLR), if everything else — including humidity, clouds, gases, lapse rates, the tropopause, and absorbed sunlight — stays the same? (This particular partial derivative is the Planck sensitivity, central to the conventional model.)

Normally partial derivatives are employed when there are only a few variables, and those variables are independent of one another. For example, one might be on a hill and be able to measure height, latitude, and longitude. You could use the partial derivative of height with respect to latitude (how much height changes as you move north, i.e. the slope facing north) and the partial derivative of height with respect to longitude (the slope towards the east) to estimate the change in height as you make some move that is a combination of northerly and easterly moves. This works because you can move north or east independently of the other.

But in climate there are many variables and they are not independent — they form a rich web of feedbacks and indirect interconnections. As a rule of thumb, “in climate, everything depends on everything”. Consequently it is not possible to hold everything constant except for only two variables, as required for partial derivatives to exist. For example, warming the surface affects nearly every climate variable, not just the OLR.

The partial derivatives of dependent variables are strictly hypothetical and not empirically verifiable — like the proverbial angels on a pinhead. In climate, you cannot vary just one variable, hold everything else constant, and measure the change in the other variable of interest. Employing partial derivatives in climate therefore incurs unknown approximations — so it is unreliable.

The conventional model relies heavily on the Planck sensitivity, a partial derivative in which everything except tropospheric temperatures (which all change uniformly) and OLR are held constant. Wouldn’t a model architecture that avoided the Planck sensitivity altogether be better? (“Better” as in more reliable, because the components of the model could be empirically verified.)

When a quantity depends on dependent variables (variables that depend on or affect one another), a partial derivative of the quantity “has no definite meaning” (from Auroux 2010, who gives a worked example), because of ambiguity over which variables are truly held constant and which change because they depend on the variable allowed to change.

So even if a mathematical expression for the net TOA downward flux G as a function of surface temperature and the other climate variables somehow existed, and a technical application of the partial differentiation rules produced something, we would not be sure what that something was — so it would be of little use in a model, let alone for determining something as vital as climate sensitivity.

The Required Partial Derivatives Do Not Exist

In the previous post on the conventional model, the net TOA downward flux G was a function of the surface temperature TS‍, n climate drivers‍, and m feedback variables‍. For brevity, let W denote all the climate and feedback variables, so G is a function of TS‍ and W. The partial derivative of G with respect to TS‍ at the initial steady state is defined as

Cannot Hold Everything Constant Except for One Variable

The notion of “holding everything else constant” can be ambiguous or arbitrary in climate. Because the climate variables are so interconnected, it may be impossible to plausibly and unambiguously hold everything constant except two variables.

Another example. When holding all else but the surface temperature and OLR constant, in the troposphere the temperatures change in unison with the surface. Therefore the water-holding ability of the air changes. Are the specific humidities or the relative humidities held constant? (They cannot both be held constant.)

Lucia’s first post on our posts, at the Blackboard: Questions to David Evans: What do you mean about partial derivatives?

Our response to Lucia’s first post: Lucia has a bad day with partial derivatives

Our response to Lucia’s second post: Lucia has a bad week on partial derivatives
*Originally the first paragraph started (until 10 Oct 2015):

And so begins the list of errors. The climate models, it turns out, have 95% certainty but are based on partial derivatives of dependent variables with 0% certitude, and that’s a No No. Let me explain: effectively climate models model a hypothetical world where all things freeze in a constant state while one factor doubles.

This lead to understandable confusion that the post was about GCMs, especially among those who hadn’t read the previous posts and didn’t realize this series was about basic models.