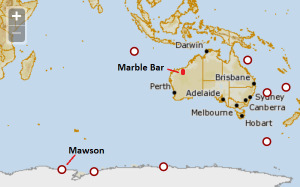 The danger is in the definition

Ken Stewart has been diligent at trying to understand the Bureau of Meteorology (BOM) method for finding heatwaves. He’d heard BOM head, Rob Vertessy speak on ABC radio, declaring that heatwaves were the “number one cause of death” from natural disaster in Australia. Ken wrote to Vertessy repeatedly  but for some reason, despite the deadly risk to Australians, Vertessy was unable to answer the question of how to define and estimate heatwaves. (Perhaps if the BOM had The Internet, he could have sent Ken Stewart this link, which Stewart has now found himself four months later.)

The Excess Heat Factor: A Metric for Heatwave Intensity and Its Use in Classifying Heatwave Severity, John R. Nairn and Robert J. B. Fawcett (2015) [1]

With these instructions Ken has now replicated the BOM results for the 2014 heatwave in Melbourne. He has also used the same technique on Marble Bar, Western Australia, and Mawson, Antarctica and found that potentially heatwaves are a killer danger to our Antarctic researchers, and if heatwaves kill, they’d be much safer in Marble Bar. For the record, Marble Bar is the place that had 160 days in a row with daily maxes above 100F (37.8°C) in 1923-24. But that’s not much of a heatwave according to the BOM.

Australians may think they understand the term “heatwave” but the BOM don’t define it the way the average man-in-the-street does. The BOM know that humans can adapt to a wide range of temperatures, so the point of a heatwave is not about absolute temperatures but about the variation from the norm. That means the relentless unending heat of Marble Bar is not a heatwave, it’s “normal”. A few warm days in Antarctica, though, can really shock the system. 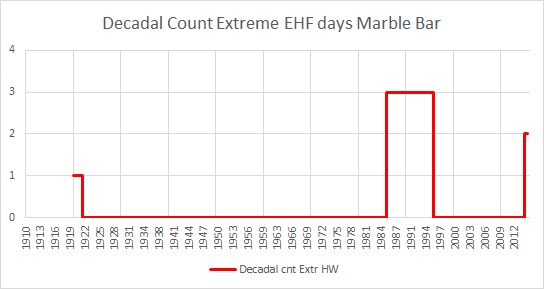 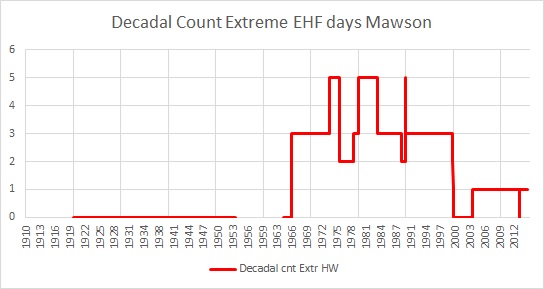 There are several steps.  Readers should read the paper for full details.  Briefly, using a daily mean temperature calculated by averaging the day’s maximum and the following night’s minimum, three-day means are calculated.  These are then compared by subtracting the previous 30 days’ daily means (as people acclimatise to changed temperatures in this period).  Differences that exceed the 95th percentile of all three-day means from 1971 to 2000 are multiplied by the three-day mean to give the Excess Heat Factor, which indicates heatwave.  This is then compared with the 85th percentile of all positive EHFs from 1958 to 2011 to give a severity index, and if it exceeds 3 times the 85th percentile this becomes an extreme heatwave event.

“The intent of these definitions is to create a heatwave intensity index and classification scheme which is relative to the local climate. Such an approach is clearly necessary given the abundant evidence that people and supporting infrastructure are largely adapted to the local climate, in physiology, culture and engineered supporting infrastructure.”

Here are the results for Melbourne- with all its UHI effect of course.

Between the combinations and permutations of hottest ever records and adjusted trends, this type of heatwave  calculation fills the PR gap on many towns or locations which might fail to trigger a suitably scary press release.

In the Nairn paper during one three-week period in the summer of 2009, the “excess heat levels” across Australia looked like this: 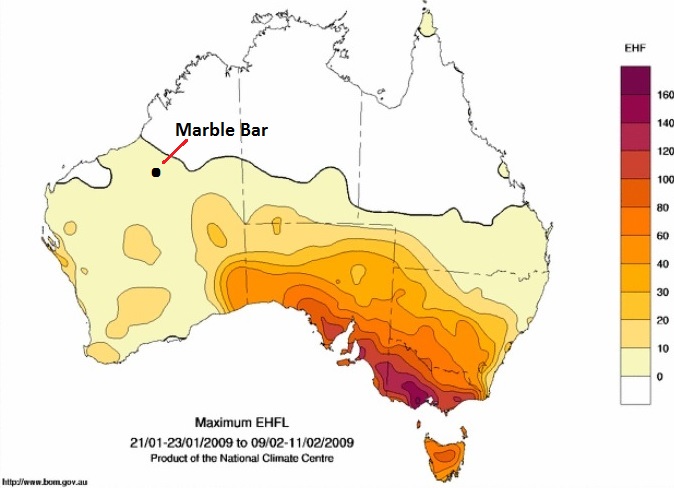 During these three weeks Marble Bar scored a measly 0-10 units – possibly because for the three weeks before this the max temperature at Marble Bar was above 40C every single day, and the minima did not fall below 24C.

Ultimately, there are an infinite number of ways to measure heatwaves. When Ken Stewart used a 40C cut-off, he found there were more heatwaves lately in Adelaide, but less heatwaves in Sydney, Melbourne, Hobart, or Darwin  where 9 million Australians live. The BOM don’t mention  this. Geoff Sherrington looked at 4, 5, and 6 day trends in our capital cities and found the top 20 instances of them in each city and looked at whether there were more in the latter half of the record. He found Perth had had more heatwaves, Adelaide less, and Melbourne, Sydney, and Hobart had no trend.

The trend in heatwaves depends entirely on the definition, and there are advantages and disadvantages with every method. But the BOM don’t tell Australians how fickle or “flexible” their heatwave trends are. Is there a point in reporting noise as if it mattered — only if it’s PR you seek, not scientific truths.

The BOM’s human biology expertise may be letting them down. One day, when they get The Internet, they may also discover air conditioning and the life saving value of coal fired cheap electricity. The heatwave that kills the most Australians, and every single year, is the lack-of-heat-kind. Even in a hot country like Australia, cold weather kills far more often than heat. A study on mortality rates in 74 million people showed the cold-toll is 20 times higher than the heat-toll.[2]

In Australia, a survey reported last week suggests nearly half of NSW householders are not turning on heaters despite feeling cold. (Thanks to NSW having the second highest electricity prices in the western world these days). Consumer group One Big Switch have 550,000  members and surveyed 10,000 NSW households in June and July 2015.

“47% of households are not running their heater this winter, “even though I’m cold”, raising the question of whether high electricity prices are causing health and safety issues, particularly for older Australians.”

What’s the bigger threat to health? CO2 output from a coal fired generator, or rampant unnecessary taxes that stop householders from being able to heat their homes?

NSW is not short of coal. Perhaps someone in NSW can explain why electricity costs so much there? The reasons doing the rounds are that it’s a poles and networks cost, and not much due to “renewables”. But given that Queensland and WA are both less densely populated (and WA is not even connected to the national grid it is so remote)  it’s hard to see why their poles and networks could possibly be more expensive.

“In NSW, electricity prices have doubled in the past 5-8 years, due mainly to increases in network costs.[4]

NSW retail prices are 2nd only to SA and are the 4th most expensive in the world, according to a 2012 analysis by Carbon Market Economics.[5]

h/t Ken, and David B

Read it all at Ken Stewarts blog.

Other posts on heatwaves: