Tony Thomas visited the UK and found old fading National Trust signs using scary photos of flood damage and warning people to “eat local” and change their light globes to stop more floods. He followed that thought to a 2005 web plea from the National Trust, to find them claiming floods are accelerating but using 20 year old photos to scare people with.

Years from now people will study climate propaganda and marvel at how stupid it was.  — Jo

My wife Marg and I, two Antipodean yokels, wound up at the National Trust’s Bodiam Castle in Kent last month, awed at its 650-year history. After all, our colony’s iconic historical moment was in 1854, when someone broke a hotel lamp in Ballarat, Victoria and precipitated a scuffle between goldminers and police. The ringleader, instead of being quartered like Mel Gibson  — sorry, William Wallace — acquired a seat in Parliament next year and eventually died in bed. That’s all you need to know about Australian history, unless you’re into sheep.

Marg and I had lunch and wandered out the back of the Bodiam cafe towards the Rother River. “Hey, come and look at these signs!” she called. I ambled over to the bank that descends steeply to the river.

The first sign said, “The Rother – Where you are standing now will almost certainly be under water in 50 years’ time as a result of climate change. A foretaste of this was given in November 2000 when the river burst its banks and flooded the area.” Below this, the sign had a photo of, sure enough, the water level raised two or three metres to where I was standing. And photos don’t lie. 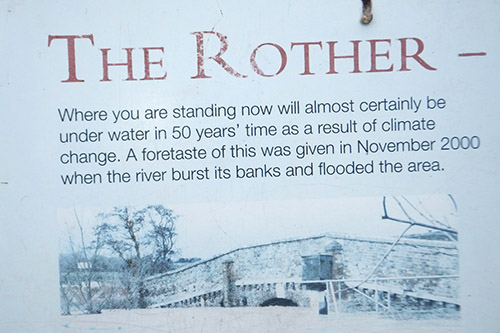 “We all have a part to play in tackling climate change and by acting together we can make a big difference. The National Trust is helping by looking at its use of energy, water and waste. You can help too by:

For more information, look at the National Trust website.” 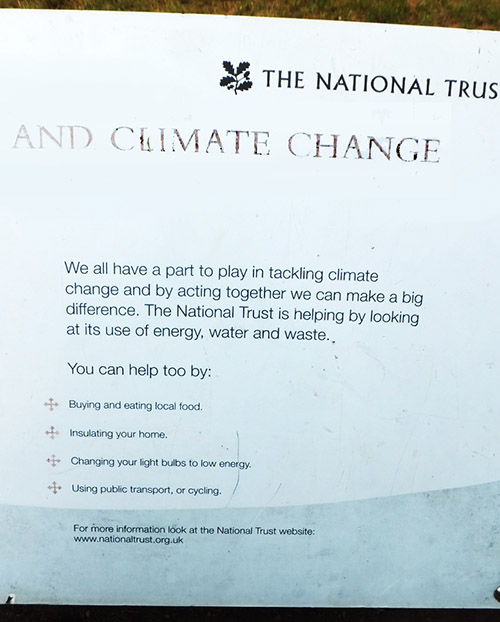 We visited heaps of National Trust properties around Kent and admired the dedicated efforts of staff to preserve the built glories England. But that Bodiam signage got to me. “Lions led by donkeys,” I muttered about the Trust’s experts.

The Bodiam signs were faded and I guessed them to be a decade old.

Sign 1 about the ‘almost certain’ massive sea rise by 2050 was just daft: the latest IPCC report talks about half a metre by 2100. And bolstering the claim with a pic of the 2000 Rother floods was even dafter. The Rother is always flooding: photographers love tripping down there to do arty pics of  soggy scenes.

Sign 2 reminds me of a never-to-be-forgotten school teacher who talked down to me as though I were an idiot (Don’t say it!). Who came up with that sign wordage? Do changing light bulbs and eating local leeks forestall a planetary Thermageddon?

I took the sign’s advice and found a Climate Change statement on the Trust website , “Climate Change – Forecast? Changeable!” which dates from 2005. It was the Trust’s first go at the topic. At that date the warming halt was only starting and warmists were riding high on their ‘settled science’. The report claimed, “It is clear that we are undergoing a period of rapid and accelerating climate change.” Good try, but the warming halt is now 18 years.

The Trust also threw the switch to activism: “We will be proactive in raising awareness of causes and effects of climate change with members, visitors and the public; and inform people of Trust responses to it.” 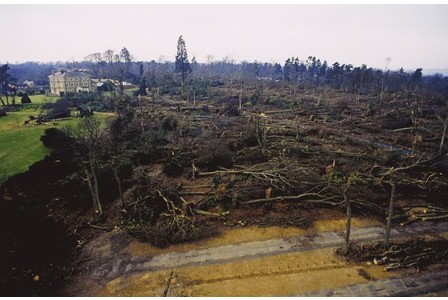 A National Trust property hit by the Great Storm of 1987

To ram the point home, the report has a pic of an unnamed stately property with surrounding trees laid waste by storms. The text says, “While there has always been climate change it is the pace of change which marks out the last few decades as something radically different… There is growing occurrence of storm damage to Trust trees and woodlands.” (Their emphasis).  But whoa! This pic was obviously from the Great Storm of 1987 when similar damage was pictured at heaps of Trust estates – see http://www.sevenoakschronicle.co.uk/Hurricane-forced-National-Trust-difficult/story-17068178-detail/story.html#6 (h/t to Dennis Ambler.)

If such disasters are a ‘growing occurrence’, surely the Trust could do better  in 2005 than to pluck a pic from  its 1987  archives?

The authors even fret over visitors getting sunburn because the Trust can’t order them to wear hats and use sunblock. Its own staff are encouraged to cover up, and work displaced shifts to avoid England’s blazing summer sun. (Maybe the authors had been watching that Lawrence of Arabia movie.) The authors also mention “dehydration risk for staff and visitors, and risk of fatalities from unauthorized  swimming in lakes etc”. That’s original: global warming will increase drownings of people who swim in Trust lakes without authority.

We get quite close to the East Anglia University bloke’s forecast in 2000, “Children just aren’t going to know what snow is”. The Trust authors say,

Cranking up the rhetoric, they continue,

“We simply don’t know exactly what the UK’s climate will do very long-term, because it depends on the future level of carbon dioxide and other gas emissions in the atmosphere, and also because some impacts are highly unpredictable in a complex climatic system. The experts believe there is no likelihood of the Gulf Stream closing down within the next two decades, but it is a possibility longer term.”

Phew, I’d been worried about that Gulf Stream!

Moving to the present, Trust director-general Dame Helen Ghosh caused a furore in  April by opining that “we must tackle climate change” and hold back the ocean to stop bits of the coastline “falling off into the sea”. (I stuck a topical reference here to Cnut but thought better of it). Dame Helen also wanted to stop climate-change-enhanced silverfish from chomping on the Trust’s books and manuscripts, and she wanted to ladle more love to wind turbines.

This was treated by her denigrators as new Trust policy but the 2005 report and my revelation at Rother suggest  the Trust had long been getting on-message with the Maurice Strong and Rajendra Pachauri team (cue an unlikely BBC special: “Whatever happened to those two?”).[i]

Dame Helen is hardly Roberta Crusoe as catastrophist in the West’s national trust scene. Professor Simon Molesworth from Latrobe University (up the road from my Melbourne house) is chairman of the International National Trusts Organisation (INTO), and is seriously ‘into’ climate doom. A down-under ‘Ocker’ flavour even seeps into the INTO website, with a reference to things ‘missin’ in the global debate, and how the Molesworth-drafted INTO ‘Victoria Declaration’ on doomery is ‘often sited’.

The Declaration claims the threat of climate change is drastically understated by UNFCCC and other protocols, i.e. they

“ insufficiently acknowledge the capacity of climate change to substantially, if not totally, undermine the integrity of the world’s cultures, altering most and destroying many…History has shown that the obliteration of a culture leads to social annihilation…” Blah blah.

Compared with this sort of language, Dame Helen is being quite restrained and all those members who quit over her climate advocacy ought to beg  her  for their tickets back.

Australia meanwhile has tumbled from 40th rank in 2013 to 60th rank in 2015 in the Climate Change Performance Index of the Climate Action Network Europe, so our conservative government must be doing something right.

[i] Pachauri’s lawyer Asish Dikshit (true) won him the right to visit the US from June 29 to July 9 for his brother-in-law’s funeral. There is a condition to his bail on charges of molestation, stalking, sexual harassment and criminal intimidation, that he stay in India unless permitted otherwise.

Maurice Strong, now 86, one-time executive director of the UN Environmental Program, co-created the IPCC, but has lived in Beijing since 2005, when a controversy erupted over his endorsing a USD 988,885 cheque to himself from a shady South Korean business man via a Jordanian bank. He was never accused of any wrong-doing and said he just wanted to sideline himself until the cloud was removed.