There is only one good reason to buy The Age: cartoonist John Spooner 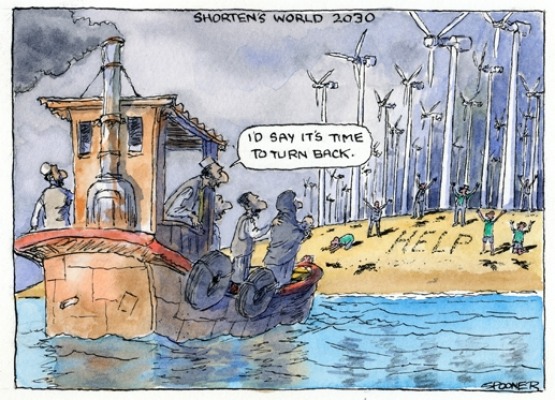 For foreign readers, there are two big headlines in Australia this week that Spooner is teasing us with.

One is about Shorten’s fantasy that Australia can go 50% renewable by 2030. This is an “aspirational ambition”, which, according to opposition leader Shorten, doesn’t need any kind of feasibility or budgeting before being announced as a policy. He plans to wave his magic wand and make aspirations happen, regardless of stuff like “money”, “Watts” and thousands of dead bats.

The second is that the Labor Party is tearing itself apart over whether to have the “option” to maybe-maybe-not turn back boatloads of asylum seekers. Turning back boats has killed no one; allowing boats through has led to over a thousand deaths.

If he follows through on the 50% uncosted renewables aspiration, Shorten may solve the illegal boat problem by trashing the Australian economy and removing the economic incentive to come. “That’ll help”.