A new study suggests that the Pacific ocean near Peru was two degrees warmer 10,000 years ago.[1]

The current rate of warming (as estimated by ARGO buoys in the last ten years) is 0.005C per year. So we are only 400 years away from achieving the same kind of warming the Mesopotamian Farmers did.

Of course this could be just a localized warm patch, except that an earlier study showed that waters draining out of the Pacific to the Indian Ocean were also much hotter during the same era.[2] 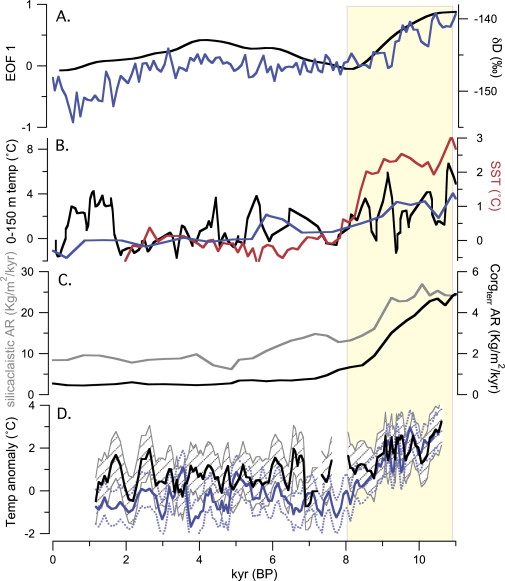 The present time is on the left. Graph A shows temperature proxy from Antarctic ice cores, graph B shows 0-150m depth ocean temperature in black

Temperature reconstructions from a shallow core (375 m) from the Peru Margin are used to test the influence of Subantarctic Mode Water (SAMW) on the eastern equatorial Pacific (EEP) thermostad and thus the effect of southern high latitude climate on interior ocean heat content (OHC). Temperature estimates, based on Mg/Ca measurements of planktonic and benthic foraminifera (Neogloboquadrina dutertrei and Uvigerina spp  ., respectively) show higher temperatures in the early Holocene, a cooling of ∼2°∼2° by 8 kyr B.P. and after relatively stable temperatures to the present. The temperature signal is similar in direction and timing to a rather robust Holocene climate signal from the southern high latitudes suggesting it originated there and was advected to the core site in the EEP. Based on the N. dutertrei and Uvigerina Mg/Ca temperature and δ13C records we conclude that SAMW acted as a conduit transporting the southern high latitude climate to the interior of the equatorial Pacific. We propose that the early Holocene warmth is related to a southward migration of the Subtropical Front, which enhanced the influence of warm subtropical water in the region of SAMW formation and was then transported to the EEP thermostad. The early Holocene warmth recorded in the EEP thermostad has a muted sea surface temperature expression indicating this mechanism is important for sequestering heat in the ocean interior.

h/t Hockeyschtick which compares the warming of the last half century with the holocene era:

Contrary to popular belief, the global oceans have warmed only 0.09C (9 hundredths of one degree) over the past 55 years (Levitus et al 2012). The entirely natural warming of the Eastern Equatorial Pacific Ocean at the beginning of the Holocene ~10,000 years ago found by this paper is over 22 times greater by way of comparison.