The Australian Medical Association is a powerful union here, and the  AMA President, Brian Owler, is an outspoken advocate of the need for more action to change the climate, calling it “intergenerational theft” if we don’t do something. (Apparently we care for our kids by spending billions of their dollars now on schemes to fix the weather. If that’s not stealing, what is? )

Apparently the AMA are surveying their members to prepare for their big political climate statement. Christopher Monckton has the questions (and the correct answers) below. My message is that the climate models are wrong, and that thousands of scientists, including most engineers and geologists and even half of meteorologists are skeptical of the exaggerated forecasts. Carbon dioxide has a small effect which is magnified in models with guesses about humidity and clouds that we know are wrong. Australian doctors have a great reputation that will be tarnished if they are seen as using their trusted position to score unscientific and political points.

Though if the AMA did come out as “Doctors for the Planet” raging against carbon, I look forward to John Cook’s announcement that their opinion is irrelevant because they have no expertise in climate science.

Another me-too climate statement by a non-climate body

By Christopher Monckton of Brenchley

Several concerned senior members of the medical profession in Australia have contacted the Lord Monckton Foundation to express their disappointment at an opinion survey on climate change circulated by the Association’s President, who proposes to promulgate what would be yet another me-too “Position Statement on Climate Change”.

Though, as one doctor has pointed out, it is welcome that before the Association commits itself to any position statement it is first consulting its members [which is more than can be said for most scientific societies that have issued “me-too” statements on climate change], members are dismayed that they are being consulted on a subject that is wholly beyond the scientific competence or remit of the medical profession.

An eminent specialist at a tertiary training institution put it thus: “I have no expert knowledge in the sciences associated with climate, meteorology etc. I very much doubt if many members of the AMA have the relevant knowledge to come out in support or protest of any particular climate stance … any noise generated by the AMA carries no more weight than any other trade grouping.”

The most frequent complaint, however, is that the terms of the survey are prejudiced, being calculated to reflect only an interventionist viewpoint. For instance, one of the survey questions cites the final report of Tim Flannery’s relentlessly partisan and now disbanded Climate Change “Authority”.

Flannery is the activist, paid $180,000 of Australian taxpayers’ money per year for his former part-time sinecure as head of the “Authority”, who foretold that, because of manmade global warming, never again would water flow through the rivers of the vast Murray-Darling Basin to the major population centers of south-eastern Australia.

Just months later, the most recent of the region’s frequent droughts broke and heavy rains filled every river and reservoir in the system to the brim.

To assist doctors who may wish to participate in the AMA President’s propaganda exercise, but in a manner that accords not with his self-evident prejudices but with objective scientific data and peer-reviewed results, each of the survey’s questions will be set forth, followed by relevant data and references.

To what extent do you agree that “There is now substantial evidence to indicate that human activity – and specifically increased greenhouse gas emissions – is a key factor in the pace and extent of global temperature increases”?

The upper few meters of the ocean, which must warm if the planetary surface is to warm, have cooled very slightly  during the 11 years of systematic subsea temperature observation by the 3600 automated bathythermograph floats of the ARGO series.[1] The floats only measure the top mile and a quarter of an ocean that is in places many miles deep. Over the entire mile and a quarter there has been warming, but only at a rate equivalent to 1 C° every 430 years:

The gentle increase in the ocean warming rate with depth suggests volcanic warming by slow diffusion from below rather than greenhouse-gas-driven warming from above. The warming may be occurring chiefly via the mid-ocean divergence boundaries through which magmatic heat is transferred directly to the sea floor. We do not know for sure, because the ocean below 1.9 km depth is not systemically monitored.

Or there may be no ocean warming at all, for each buoy has to measure a 200,000 km3 volume of seawater about 200 miles square by a mile and a quarter deep, so that the coverage uncertainty is monstrous.

The UAH and RSS satellites show that the lower troposphere, the body of air directly above the Earth’s surface, has not warmed for 18 years 5 months and 18 years 6 months respectively, notwithstanding increases in CO2 concentration at a rate exceeding 200 μmol mol–1 century–1 over the period:

According to the RSS dataset (Mears & Wentz, 2009[3]), the central medium-term rate of global warming predicted by the first report of the Intergovernmental Panel on Climate Change in 1990 has proven to have been exaggerated by more than two and a half times. The slow rate of observed warming over the past quarter of a century has proven very substantially below even the IPCC’s then least estimate, and is well within the natural variability of the climate:

The terms of the AMA’s survey question are accordingly prejudiced in that they strongly imply that global temperature is increasing apace when in fact in almost two decades it has not increased at all.

To what extent do you agree that the policy of the Australian Medical Association should strongly assert it is Australia’s and the global community’s responsibility to limit global temperature rise?

In 1032 AD, England had a wise Danish king who became disappointed at the propensity of the official and professional classes to assume that because they were the big enchilada they had powers that they did not in fact possess. One day King Canute caused his throne to be set up by the sea, gathered his courtiers about him, stretched forth his hand and commanded the tide not to come in.

The fascinated courtiers watched as sea-level rise nevertheless occurred and the king got the Royal tootsies wet. He turned to them and reminded them that if the powers of the divinely-anointed King were limited theirs too were circumscribed a fortiori:

What, then, is the power of the Australian government to command the temperature and hence the sea level not to rise? Scientific considerations demonstrate that it is little greater than that of King Canute.

Monckton of Brenchley (2013)[5], A reviewed paper published by the World Federation of Scientists, examined the then Australian Government’s “carbon” tax. Based on that paper, the following conclusions may be drawn.

If the Australian Government’s CO2 tax were to achieve its stated aim of cutting 5% of Australia’s CO2 emissions by 2020, and assuming HM Treasury’s 3.5% pure-rate-of-time-preference commercial discount rate for inter-temporal investment appraisals  –

Accordingly, it is beyond the powers either for the Australian Government or for the international community to “limit global temperature rise” in any meaningful degree, even if the climate were not a thermostatic object that has for the past 810,000 years regulated the Earth’s surface temperature to within the 3.25 C° either side of nominal permitted by the average household thermostat (Jouzel et al., 2007[3]):

The analysis in Monckton of Brenchley (2013) is consistent with the IPCC’s Fifth Assessment Report (2013)[2] and with the near-unanimous opinion of the reviewed papers on mitigation economics in the learned journals in concluding that the cost of mitigating climate change today exceeds that of adapting to its adverse consequences the day after tomorrow, even if per impossibile there were as much climate change today as predicted, and even if per impossibile the adverse consequences were as severe as predicted.

The survey question is also remiss in not stating what it means by “limiting global temperature rise to below 2 degrees”. The ideal global mean surface temperature that must not be exceeded by more than 2 C° is not stated: nor is any scientific or other justification offered either for that ideal or for limiting any temperature rise above that imagined ideal to 2 C°.

Some 90% of the Earth’s species live in the tropics, where it is warm and wet. Only 1% live at the Poles, where it is cold and dry. Until the global warming scare, climate scientists used to refer to warm periods as “climate optima”. For life on Earth, warmer is better than colder.

Nor does the survey question make it clear that the “2 C°” limit is a purely political and not scientific target, adopted by non-scientific representatives of governments at one of the interminable UN annual climate conferences.

Nor does the question make it clear that the politicians had arbitrarily decided that the world should not be allowed to become warmer than 2 C° above pre-industrial temperature, or just 1 C° above today’s temperature.

If the policy of the Australian Medical Association includes emission reduction targets for Australia, should the Climate Change Authority’s targets be endorsed, or some other targets?

Should the Australian Medical Association advocate for the health sector to reduce its carbon footprint?

Given the absence of any global temperature response over the past 18 years 6 months to CO2 emissions at a rate greater than in the past 810,000 years, there is no scientific justification for any reduction in “carbon footprint”. In any event, in the absence of any specified magnitude for the reduction, the question is meaningless.

Disinvestment is ineffective. While it remains profitable to extract and export coal, as Australia does, shares sold by some will be bought by others. A representative of Shell, speaking in May 2015 at the Royal Society of Edinburgh, made it quite clear to a questioner that Shell were entirely relaxed about disinvestment, since it had been shown to make not the slightest difference to the share price or to anything else except the inadequately-informed consciences of the disinvestors.

While it remains necessary to burn coal to lift third-world economies such as China and India out of poverty, which is the fastest way to increase their prosperity and thus to stabilize populations and minimize the eventual environmental footprint of Man, disinvestment campaigns – even if they worked – would cruelly deprive the poor of the cheap, low-tech, reliable, base-load electricity they so desperately need.

The entire teeming continent of Africa, setting aside the Mediterranean littoral and South Africa, consumes no more electricity per day than the single, small outback town of Dubbo, New South Wales. Africa is in the literal sense the Dark Continent.

Therefore, any attempt – however unlikely to succeed – to harm the work of fossil-fuel corporations is calculated to condemn the world’s poorest people to a life without electricity – a life that is poor, nasty, brutish and short.

It is, to say the least, a curious interpretation of the Hippocratic oath that would lead any professional association of doctors to advocate measures calculated to prolong the severely adverse health consequences of denying coal-fired power to the sick and struggling billion of our fellow-men who cannot so much as turn on a light: 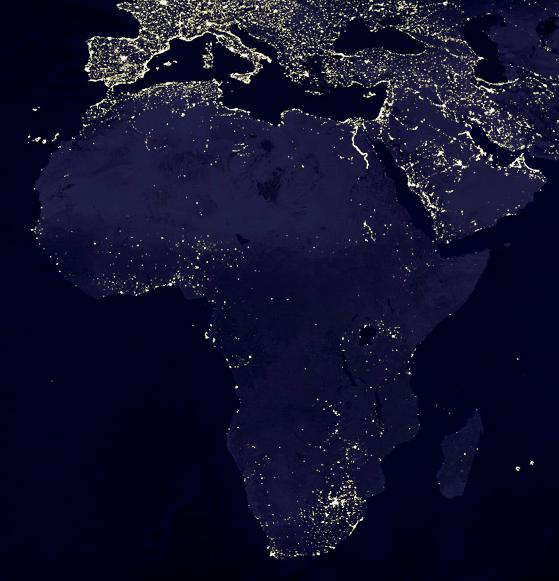 [1^] ARGO (2015) Bibliography of papers related to the network of ARGO temperature-salinity floats, http://www.argo.ucsd.edu/Bibliography.html