A MOOC is a Massive Online Open Course, and Cook’s course has 13,000 students so far.  He is a Climate Communication Fellow for the Global Change Institute at the University  and author of the notorious 2013 study purporting to find a 97% climate consensus in the science literature.

One normally gets a buzz from study. But my brain needs a shower and scrub to feel clean again.

I was not intending to write about my studies so early, in case that got me prematurely expelled. But one week of it is enough.

Worse is in store. Cook says, “Next week’s interviews are equally exciting, as we speak to Phil Jones from the University of East Anglia…” Jones is the author of   “pretty awful emails” (his words) in Climategate. Other stars in the Cook course firmament will be Michael “Hockey-stick” Mann and sort-of historian Naomi “Merchants of Doubt” Oreskes, who in another book fantasizes about how warming may kill your kittens and puppies in 2023.

Cook is clearly stung by FOI and other determined requests for the data on which his work is based. He complains in his course about deniers “accusing the scientific community of falsifying their data”, and of attacking the scientists themselves via emails and blogs, hacking their personal correspondence and excessive FOIs. Incredibly, the lavishly-funded Cook plays the victim card for himself and the team  – at a time when scientists like Willie Soon are being subjected to Joseph McCarthy-style attacks. Cook says:

“Perhaps the most damage to the integrity of science comes in the form of pressure being applied to academic journals and universities.

There’s a growing body of literature into the nature of complaints being received by academic institutions…The intent is to interfere with one of the basic principles of scientific work – the freedom to responsibly conduct research and accurately communicate the results.

The immediate consequence is that some academics are now facing what amounts to scientific censorship.”

He also claims – incredibly – that fear of denialist attacks is causing climate scientists “to underestimate the impacts of climate change, in order to avoid a hostile response.”

Cook begins the course by breezily defining “denial” as coming to a conclusion first, and then discounting any evidence that conflicts with your belief. [Like what Cook does, right, says Jo, who used to believe, but changed her mind.]

Ambitiously, Cook wants to ‘reclaim’ the word sceptic from the sceptics. [No chance, says Jo who wants to reclaim the word scientist from the unskeptical believers, who hide data, declines, and pander to a “consensus”. – Jo]

And given Cook’s cognitive psychology  background, he intends to teach his students about ‘drivers of denial’, denial psychology, and ‘tell-tale characteristics of denial’. 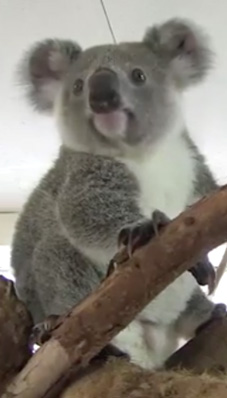 Screenshot of Pistachio the koala in the course material

Cook reaches down to kindergarten-standard teaching. He enthuses about securing an interview with ecologist Sir David Attenborough, then says, a la Play School,  “But giving Sir David a run for his money is another star of this course – Pistachio the koala. “ [I think it makes a “grate” segue, says Jo.]

“And we mustn’t forget Christine Hosking, the University of Queensland scientist who researched the impacts of climate change on koalas.

“Another highlight of the MOOC that I’m particularly excited about is “The Climate of Middle Earth”, featuring a climate scientist from the University of Bristol, Dan Lunt. We captured so much exciting footage of Dan simulating the climate of Middle Earth that we divided his interview into a trilogy starting in week 4.”

I had to check that Lunt isn’t talking geology but yes, Lunt is talking Gandalf and Frodo Baggins. 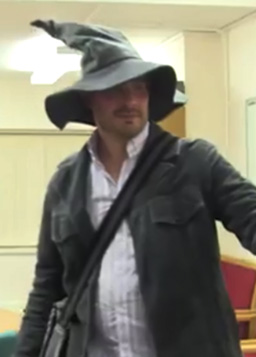 Lunt of Bristol U., in role.

Cook’s rhetorical gyrations are puzzling. Having found fame and fans with his “97% consensus” paper,  oft-cited in the course, he also remarks,  “Science isn’t based on a show of hands. It’s based on evidence.  The more lines of evidence we have, the more confident we are that our scientific understanding is correct.”

[Jo says: Righto — they don’t count hands, but they do count lines?]

He drills his students that the “consensus” is that human-caused CO2 promotes warming. This is hardly controversial. I can’t find anywhere in Week 1 where he explicitly states, rather than implies, the orthodox case that humans have been causing most of the past half-century’s warming – an assertion at the heart of the climate controversy.

Instead he says that  satellites are showing   “less heat escaping to space”. And  this somehow proves that greenhouse gases are responsible and what’s more, it’s “a human fingerprint in outgoing heat”.

[This’ll be Harries et al, which shows that CO2 is indeed a greenhouse gas and does absorb the frequencies we think it does. It doesn’t show that there is less heat escaping overall, just that there is less heat escaping in a small part of the spectrum. It shows that CO2 levels have increased, which skeptics agree with, and which we already know.  – Jo]

Another   “distinct human fingerprint”, he says, is that there’s a warming lower atmosphere (not for the past 18 years, actually) but a cooling upper atmosphere. The two fingerprints, plus others, “rule out” the sun and internal variability as causes of the (halted) global warming.[i]

[The warming lower atmosphere and cooling stratosphere can also be due to changes in ozone, it’s not unique, and it doesn’t show that the models have their calculations right. The key fingerprint that climate experts predicted is the tropospheric hot spot that is absolutely, completely missing. – Jo]

The human-caused warming evidence, says his co-lecturer Scott Mandia (Suffolk College, New York), is just as strong as the settled fact that smoking increases the risk of lung cancer.

“(E)ven if you threw out every climate model in the world, our confidence that humans were causing global warming would be just as strong. That’s because we have many human fingerprints all adding to a great pile of evidence,” Cook says.

Strange, that the Australian Academy of Science cites the models as   primary evidence for human-caused warming.[ii]

Cooks considers that  his feeble exposition 100% validates his global warming case, and hence anyone disputing it must be in thrall to psychological and ideological obsessions. At great length he and Mandia probe  into denialist political beliefs and neuroses, which is their academic specialty.

Now put yourself in a student’s shoes, and take some of this Cook course’s official exam, intended to gauge if you have mastered the Week One material.

Question #1: What characteristics of denial are used in the Global Warming Petition Project, the petition listing over 31,000 scientists who don’t believe that humans are disrupting climate (you may mark more than one):

Question #3: What characteristic of science denial is used in the following 1946 advertisement:

Question #6: Tick which of the following examples of media coverage are examples of balance-as-bias that distort an issue (you can choose more than one):

Question #9: Identify the category that each tactic fits in

(i) Sending complaints to universities and scientific journals. [Your choice is]

(iii) Conspiracy theories about falsified data [Your choice is]

My main disappointment with the course is that Cook’s grasp of the climate science debate is so flabby.   He’s not a serious opponent for anyone. Cook and Pistachio the Koala say something about standards at Queensland University, somehow  ranked 3rd in Australia, sixth in Asia/Pacific and 85th in the world.\

[i] Cook’s course says nothing yet about the tropical tropospherical hotspot which was supposed to verify the climate models and become an AGW fingerprint, but is missing in action.

[ii] Climate models allow us  to understand the causes of past climate changes, and to project climate change into the future. Together with physical principles and knowledge of past variations, models provide compelling evidence that recent changes are due to increased greenhouse gas concentrations in the atmosphere.   -; AAS, Feb 2015,  p4

UPDATE: My other posts on John Cook