Here’s a monster number lurking under an invisibility cloak. It’s the Quadrillion dollar bomb, and either the fuse has been lit, or it’s already going off in a slow motion big-bang. I first mentioned it way back when I talked about the danger of Carbon credits as another fiat Currency (my 12th post). Hang on for the ride.

The Repo action is now much worse than in the GFC (check out that graph below —  the “GFC” was a speed bump). The volcano bubbling at the end suggests that the Derivatives Bomb probably started a slow motion explosion early last year.  The US Federal Reserve are trying to contain it.

Derivatives* are often used for insurance or hedging, but are mainly highly leveraged bets.They are so much larger than the actual market, it’s better described as a global casino. World GDP is around US$60 trillion but there are at least US$600 trillion of derivative contracts, perhaps as much as US$1.5 quadrillion, as measured by face value, according to the Bank of International Settlements (the “central bank of central banks”). The problem is that all the bank debt or “all the money in the world” is less than US250 trillion.

On the surface the financial world seems pretty calm about the Derivatives Monster Market. The nominal value is huge but it’s made of  pluses and minuses that net to zero. For every winner there is a loser. That is to say, it’s a kind of imaginary funny-money in a zero sum game, and funny-money-debts wipe out funny-money-wins, so it doesn’t really affect the Real World. The problem is that if one bank goes broke, it doesn’t net-out, because the net disintegrates. It only works as long as almost all the losers can pay off what they owe. If a loser is bankrupted, the winner also becomes a loser. And the losses spread like an infection. The “winner” may have placed paired bets to minimize risk. So they thought they could use their winnings on one side to pay of their losses on the other. But now they default too and the financial plague grows. Funny-money losses have just become Real Debt.

In the last year some futures players have been hammered (think of the swings in oil, iron ore, the US dollar). There must have been some shocker-sized margin calls that went under the radar. Sometimes the losing side can toss some more money in to fend off the Debt Collector’s wolves; then they avoid closing out the contract and realizing the loss. Some players will have been in a life-or-death hunt for anything to pledge as collateral. When you are too big to fail, and seeking cash, who you gonna call? The guys who can create infinite money of course — the US Fed. 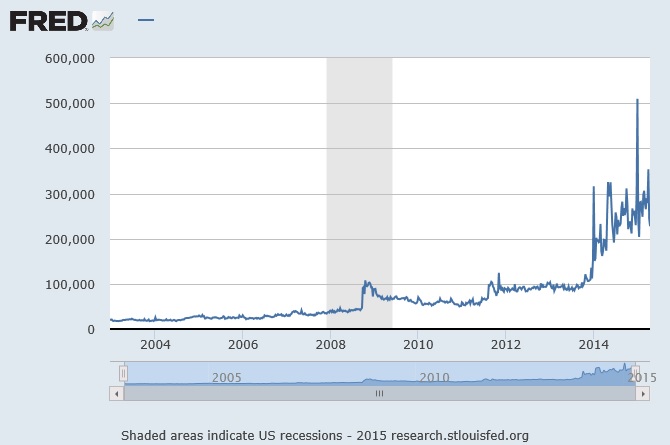 Reverse repurchase agreements held by the Federal Reserve: All Maturities

Bill Holter has a theory about how these big margin losses have been hidden. RePo’s are repurchase agreements from the US Fed, it’s like The Pawn Shop for global finance. If you have an “asset” you can swap for cash, the US Fed will “print” the money, and keep your asset. You agree to repurchase it back some day. In theory the Fed have not printed money from nothing, because the amount of money is the same as the asset’s value. But who decides that value? In extremis, the Fed could value  any asset at what ever they say is worth. The assets are supposed to be AAA (and we all know what that means), but increasingly any old thing will do and the rules are ignored because “bigger things” are at stake.  That last volcanic action in RePo’s could just be the speculators crashing in the derivatives game, getting margin calls then going to the Fed and to hock the best collateralised junk they have left, and get the cash to stay afloat.

For years I have described the current financial situation as a “giant margin call” waiting to happen.  The derivatives market is a zero sum game where someone wins and someone loses, the danger of course is someone losing so badly they become insolvent and cannot make payment to the “winner” …which would make all parties a loser in the game.  This is the fear, the derivatives chain breaks somewhere along the way and creates a domino effect both upstream and downstream causing the entire credit system to lock up.

Think about what has happened over just the last six months alone.  We have seen unprecedented FOREX movements.  The dollar has strengthened close to 30% over this timeframe while oil has dropped about 50%.  The cross between the euro and the Swiss franc saw an almost 30% move in less than 10 minutes one Monday morning in January.  There have been some very big gains AND some very big losses which would explain the need for “more collateral” which is exactly what these reverse repo’s provide.

He goes on to say “this time it’s different”. Holter argues that there must be massive hidden losses in derivatives and estimates the losses on the USD to be about $3 trillion. He (and I) wonders how any corporation on Earth could survive even “5%” of that, and that’s just the US Dollar losses.

Holter goes on to point out that what the Fed is probably doing is technically illegal. Presumably they have the best lawyers that money can buy so this is not really relevant. Hm.

So what happens now? The derivative problem can only get larger and drag down more and more participants into a mess of unpayable debt, defaults, and margin calls. Sure the central banks can create infinite cash, but eventually it becomes meaningless. According to this chart, the mess and stress is now much larger than in the GFC, and has been going on in the background for a year now. Maybe that helps explain the high number of suicides in the banking industry lately?

* Derivatives are deals on changes in any financial quantity, such as the value of a stock, a foreign exchange rate, an interest rate, a commodity price, etc.