What success! Six skeptics have been honored in prizewinning art at Anglia Ruskin, a large university in Britain. Their names were carved into a plywood mock-rock, that drips oil.  James Delingpole is rapt — who wouldn’t be?

The top of the “rock” reads “Lest We Forget Those Who Denied”. The names: Christopher Booker, Nigel Lawson, Christopher Monckton, Melanie Phillips, Owen Paterson.

Indeed, the 2015 Sustainability Art Prize went to great sustainable art. In years to come, when everyone realizes how silly it was to demonize carbon, this art will live on — recycled as a testament to the vacuity of post-modern art. This work is already a classic of government-funded-largess, capturing the pure inversion of insight that comes through unwitting satire as “daring” artists pander to power. Perfecto.

These heroic names should be carved into real rock. 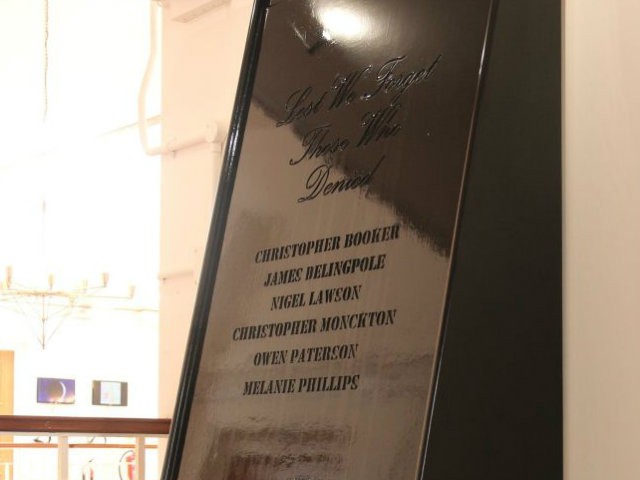 The sculpture has been described as an “oil painting with a difference” because a continuous stream of engine oil drools symbolically over the “deniers’” names, like tragic sea otters after an Exxon spill.