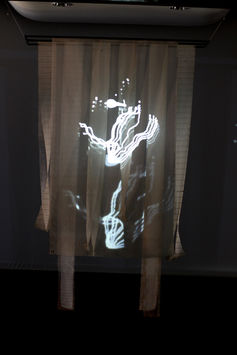 Creative genius in science is about the people who break the rules and see a pattern that the consensus thinks is wrong or refuses to discuss.  But capture creative genius in a bureaucratic clamp, smother it with political correctness, and watch the flower die. That’s what The Conversation is for.

Say Hello to a parody of “creative science” in “Living data: how art helps us all understand climate change”. It’s not about scientists who challenge a paradigm, creative science is about cartoons and dances. It’s about glowing plastic sculptures.

A methodology that uses drawing and dance as tools of enquiry is a radical idea for those accustomed to the conventions of the scientific method. But when choreographic analysis is embedded within scientific research, pattern recognition can contribute to some startling discoveries.

Big-government bought science with monopolistic funding over the last 70 years, and it’s bought science-commentary too (e.g. academia, CSIRO, the ABC, The Conversation). We can’t have people highlighting the suffocating effect of bureaucracy, of grant applications, and deadlines!  Nor would Big-Government-Science ever seek out, support, and laud scientific work that showed that big-government science (which favours Big-Government policies) is wrong. Where’s the incentive?

The author of The Conversation article not only writes on a government-funded site to promote government science, but gets government grants to do overseas trips and “animations” for climate science. Nice job if you can get it. Where’s the accountability? Dare I say, government funding kills art like it kills real science. (Let’s not forget that an arts grant helped the climate conversation evolve by funding a play called Kill The Deniers.) Thanks to government funds, we’ve devolved from the Masters to an airborne whale with massive mammaries.

“Feelings of connection” is a PR term, not a part of the scientific method.

The need to understand climate change is urgent. For some people, the facts about climate change don’t matter – so we need experiences that stir strong feelings of connection. Artists are leading the way to reconnect methods of analysis and expression in this way.

Artists may be leading the way (in science communication) — but true artists seek to understand both sides of the issue and bravely speak the unspeakable. People like  John Spooner, Steve Hunter, Josh, and Larry Pickering.

Parroting the dominant paradigm is not art, it’s just mastery of a trade skill

The Living Data program that I lead is one of several initiatives to bring together scientists and artists.

“Living data”? Now there’s a problem. The data is alive, but it shouldn’t be. Science is about observations (data) that is supposed to stay the same, and be replicated, not “dance”. Inexplicable and biased adjustments give zombie life to phantom shifting copies of the raw data. The 1970s have been warming for thirty years. That may be “art”, but it isn’t science.

Creativity is at the heart of art and science and passion drives both as ways of satisfying curiosity and expressing new findings.

Curiosity used to mean seeking out answers. Not preaching from the pulpit of consensus.

What’s an “evolving conversation” where you won’t converse with the other side?

You write about “people” for whom facts don’t matter, but you haven’t met the people who lead the debate. If you don’t read half the conversation, you are merely parroting the meme you’ve been fed. That’s not art, it’s propaganda.

If the need to understand climate change is so urgent, you and The Conversation could try to have an actual conversation. Fifty per cent of the population has a creative and scientific difference of opinion.

Let us know when you want to make the brave step from being a useful tool of the establishment to being a true artist. We’ll welcome genuine, honest inquiries.

From someone who cartoons and crafts words to provoke real creativity, and progress real science.

PS: I used to think consensus climate scientists were right too. Then my conversation evolved… “

There are a few 2015 Calendars left so if you would like to order one please go here.