The UN Department of Pointless Statistics tells us that 250,000 extra people will die every year from 2030 – 2050 because of climate change. This is assuming that the climate models which have never worked, start to, and that people behave like gladioli, staying put, not building walls, farms or inventing better gladioli homes. It also assumes that a 60% increase global atmospheric plant fertilizer will make no difference to crops.

Indur Goklany tries to help the UN by checking some of their assumptions in his new report: “Unhealthy Exaggeration” GWPF

“He argues that the health organisation wrongly assumed that people would not take practical steps to protect themselves. These include improving water supplies and hygiene to reduce disease and relocating away from stretches of coast most vulnerable to flooding. The assumptions used by WHO are not mentioned in its fact sheet but instead relegated to the third column of a table in the full report, which is based on computer models. The column, headed “potential options not included in model”, reveals that the forecast for deaths from diarrhoea does not include “improved water, sanitation and hygiene”. The forecast for coastal flooding victims does not include “population relocation” and heatwave deaths does not take into account “improved heat health protection measures; early warning systems”. — The Times (via GWPF)

I would add that at the moment the current rate of global death is about 55 million people a year, so the theoretical  “climate” toll would be an extra 0.4% above that.  Unless, of course, the global death rate falls.

The trend so far during mass human CO2 output: 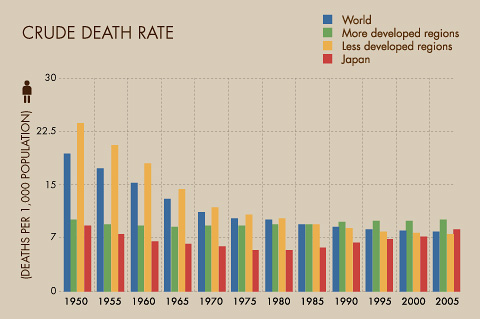 All that warming and global death rates (dark blue) decreased.

UNICEF record the effect of climate change on infant mortality to date:

“Seventy-one percent of the total finance [for the UN Aid program called FastStart”] went to emission-reduction ventures rather than adaptation projects such as water conservation or flood defense, today’s report shows.”