Showing off by sending warships near the G20? Not at all, Vladimir Putin cares about the climate, don’tcha know?

He is having fun, pushing politically correct buttons; teasing the West for its infatuation with climate-goblins. 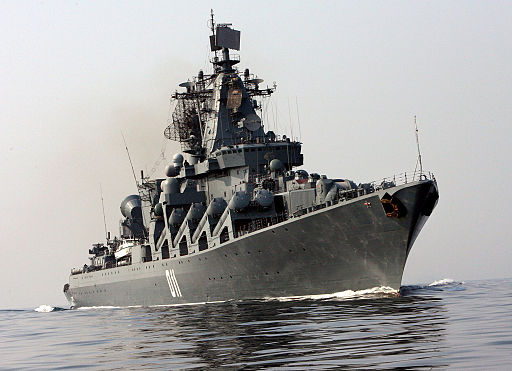 What kind of climate research will a Guided Missile Cruiser do?

RUSSIA has for the first time explained the presence of a fleet of warships off north-eastern Australia, saying that the ships are testing their range capability, in case they have to do climate change research in the Antarctic.

The Russian embassy also said the fleet could, if necessary, provide security for Russian President Vladimir Putin, who arrives in Brisbane for the G20 tonight.

The four Russian warships are conducting exercises in international waters around the Coral Sea in a move that has been interpreted as a show of force by Mr Putin.

Russia finally explains why it has dispatched four warships to Australia:

Daily Mail: Most leaders bring gifts for their hosts. Mr Putin brings a guided missile cruiser and three attendant ships. That show of unnecessary naval presence is what might be called an intended power display of swinging decks.

What a circus: three Australian ships deployed to watch, plus some planes, HMAS Sydney on backup, and Americans are following the Russians too. Fleets of warships on the rove, and Putin pretends it’s about “the climate”. It’s not even climate research, it’s research to see if they could do climate research. Can their boats go that far? Golly. Maybe they could test that Antarctic sea ice like one Russian charter boat did last year? They could make a few polynyas in the ice, the ballistic way.  (And then count the dead whales…)

If even more backup against the Russian ships is needed, HMAS Sydney has been positioned in the South Queensland area ‘to be available to support G20 activities’.

Photo: Wikimedia copy of the Varyag Guided Missile Cruiser (which may or may not be the particular Cruiser near Brisbane).