No nation has been more successful at reducing their carbon emissions than North Korea. Over the space of a few years, the carbon footprint of the entire nation was reduced by a massive two-thirds, thanks mostly to centralized planning with some help from famine, disease and the odd gulag. Anyone for Pine-bark cake? — Jo

The North Korean famine and general economic crisis from 1994 to 1998 is an extraordinary example of the failure of central planning and management. The results of what is called the Arduous March[1] are best illustrated by this image the Korean peninsula at night taken in 2014 (Figure 1). 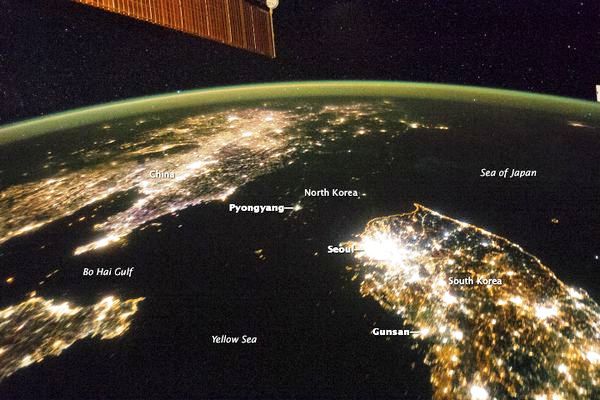 The North Korean disaster led to the estimated death of between 220,000 and 2,000,000 people, 1% to 10% of the population. The famine, which continues to this day, has led to food rationing, black markets and a government keen to get foreign currency by any means — including drug smuggling and nuclear technology sales. The disaster has led to a decarbonizing of the economy, which can be seen from the estimates of carbon dioxide emissions from fossil fuels shown in Figure 2.

North Korean per capita CO2 emissions fell by more than two thirds from 1990 to 2000.

North Korea does not use natural gas but is self sufficient in electricity supply, being half hydro and half coal fired power stations. On the other hand South Korea depends largely on imports including natural gas.

North Korea is a tragic example of the failure of central planning. It reduced its economy to a third world level, while surrounded by some of the most vibrant economies on the planet. The consumption of electricity in India is fast growing, and has now passed North Korea.

The “central planning” of the EU worries German business leaders, as they see cheaper power in North America. The UK is considering managed power outages in the coming winter. In Australia, with a population almost the same as North Korea (24 million), we handicap our mineral processing with high energy costs.