Scientists at Lawrence Livermore National Laboratory have looked at drag-reducing devices on semi-trucks, and say they can conserve billions of gallons of fuel plus tens of billions of dollars. This not exactly rocket science.

The researchers estimate that trailer-skirts and boat-tails (see the pic below) could reduce drag on trucks by as much as 25%, which means they would save about 13% on their fuel bill. Apparently only a few percent of US trucks use these devices at the moment, and the researchers claim they can make up to a 19% improvement in fuel economy.

If these work that well (and are not too expensive or painful on carrying capacity), the free market will take care of this pretty quickly.

Boat tails means a tapered shape at the back of the vehicle. They are already used on bullets (and boats, obviously). There are pics of “boat-tails” on trucks below, but my favourite shot is this boat-tail on a car. A DIY masterpiece. It’s a “Pontiac Firefly (Canadian Geo Metro). The maker Darin Cosgrove says  “the Firefly squeezed out 64 miles per gallon during testing.” I can’t see mums rushing to go food shopping in it though. Boat tails on trucks are a lot less ambitious. 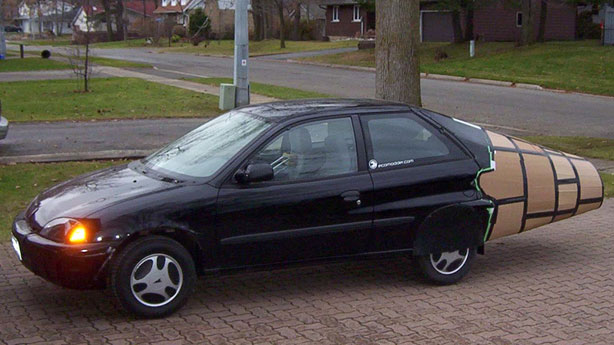 A homemade boat tail on a car from cardboard and duct tape.

Researchers estimate it could save $26b in fuel

Newswise — WASHINGTON, D.C., November 25, 2014 — Each year, the more than 2 million tractor-trailer trucks that cruise America’s highways consume about 36 billion gallons of diesel fuel, representing more than 10 percent of the nation’s entire petroleum use. That fuel consumption could be reduced by billions of gallons a year through the use of drag-reducing devices on trucks, according to studies by researchers at Lawrence Livermore National Laboratory.

“Even a minor improvement in a truck’s fuel economy has a significant impact on its yearly fuel consumption,” Salari said. “For example, 19 percent improvement in fuel economy, which we can achieve, translates to 6.5 billion gallons of diesel fuel saved per year and 66 million fewer tons of carbon dioxide emission into the atmosphere. For diesel fuel costing $3.96 per gallon, the savings is about $26 billion.”

This is what a boat-tail looks like on a truck. (Not much like any boat I’ve seen).

These might be what the trucks skirts look like. This pic was found on this ecomodder site. Though there are other side skirts for sale that are smaller.

Anyhow. Interesting idea. I like efficiency, even if I think we need more CO2, not less. Given the hassle with parking and garage space, maybe the answer is an inflatable one that pops out at speed and packs away for parking? (The truck “tail fins” do pack up BTW).

Will the Greens rush to support this fairly easy free market possibility, or will they ignore it because it does not create a dependent lobby group who would campaign for big (green) governments for ever more? Here’s a solution that allows people to travel further or save money, encourages independent business, and needs no government intervention.