Who was it that said that Renewable Energy is making electricity cheap?

The Minerals Council added up the numbers on the RET (the Renewable Energy Target) and checked the invoices. And even though “Renewable Energy” is made from the free* wind and sun, somehow, being forced to use inefficient, diffuse, and unreliable electricity costs coal miners millions.

For some reason foreign competitors didn’t voluntarily offer to match it. Perhaps they like their weather and don’t want to change it? 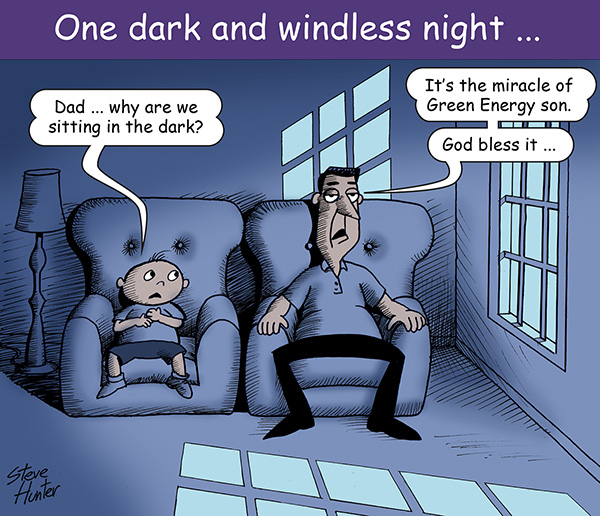 Cartoon with thanks and permission from Steve Hunter

MINERS have moved to counter arguments from the renewable energy industry that the target scheme is lowering electricity prices, releasing figures showing it is costing millions of dollars and comprising up to 15 per cent of total electricity bills.

A briefing sent to MPs interested in the renewable energy target debate, circulated by the Minerals Council of Australia, shows six coalmines in Queens-land and NSW paid a combined $7.7 million in RET costs last year and $7.3m in 2012.

The proportion that the RET charge made up of the total bill ranged from 9 per cent to 12 per cent last year, and between 12 per cent and 15 per cent in 2012. This is significantly higher than the 4 per cent average cost to house-holds because large users receive a discounted electricity price for buying in bulk.

Cabinet this week gave Environment Minister Greg Hunt and Industry Minister Ian Macfarlane a negotiating mandate to reach a deal with Labor that is in line with longstanding Coalition policy. This would see aluminium granted a full exemption and likely see the government push for a cut to the RET from 26 per cent of electricity demand in 2020 to about 20 per cent.

*Free, adj: Not imprisoned or enslaved; being at liberty. 😉   Not to be confused with the Idiom: for free.