Two papers on ocean heat released together today. The first says the missing heat is not in the deep ocean abyss below 2000m. The second finds the missing heat in missing data in the Southern Hemisphere instead. Toss out one excuse, move to another.

The first paper by Llovel and Willis et al, looked at the total sea-level rise as measured by adjusted satellites*, then removed the part of that rise due to expanding warming oceans above 2,000 m and the part due to ice melting off glaciers and ice-sheets.** The upshot is that the bottom half of the ocean is apparently not warming — there was nothing much left for the deep oceans to do. This result comes from Argo buoy data which went into full operation in 2005. (Before Argo the uncertainties in ocean temperature measurements massively outweigh the expected temperature changes, so the “data” is pretty useless.) 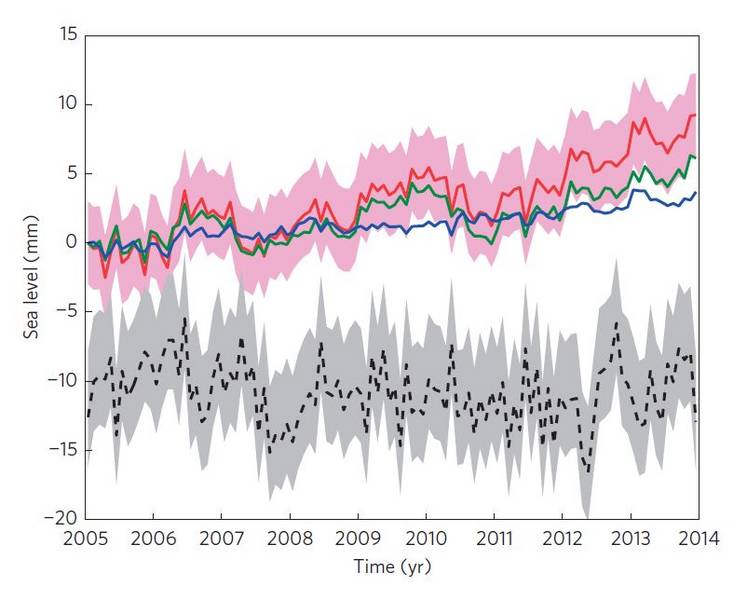 Figure 2 | Global mean steric sea-level change contributions from different layers of the ocean. 0–2,000m (red), 0–700m (green), 700–2,000m (blue). The dashed black curve shows an estimate for the remainder of the ocean below 2,000m computed by removing the 0–2,000m estimate from the GRACE-corrected observed mean sea-level time series. Seasonal signals have been removed from all curves. Curves are offset for clarity. Shading, where shown, denotes 1-sigma uncertainty of the respective  estimates.

The second paper provides the excuse that the missing heat is really in the top 700m of the Southern Hemisphere instead. The title tells us they are adding up what they don’t know: “Quantifying underestimates of long-term upper-ocean warming”. The data they use comes satellites and “simulations” of the Earth’s climate.

Using satellite altimetry observations and a large suite of climate models, we conclude that observed estimates of 0–700 dbar global ocean warming since 1970 are likely biased low.

So we all know that this is an excellent estimate of heat accruing on a planet a lot like Earth — except that global warming didn’t pause on that planet, the upper tropospheric humidity is rising instead of falling, the sea-ice is shrinking at the south pole instead of increasing, and so on. Simulated Earth is a different planet. On that planet, the ARGO buoys are “biased low”.

Yet again, the missing heat is found in missing data:

This underestimation is attributed to poor sampling of the Southern Hemisphere, and limitations of the analysis methods that conservatively estimate temperature changes in data-sparse regions.

We only have half-decent data on the ocean starting around 2005. But thousands upon millions of joules are arriving every day, and if some of that energy is being trapped on Earth, it must be somewhere. What incredible bad luck for climate scientists: yet again the observations are biased low, like 28 million weather balloons which underestimate heat and humidity, the 3,000 Argo buoys are underestimating ocean heat too.*** The models could not possibly be wrong …

Another recent paper by Schulz found that the first air-sea flux mooring in the Southern Ocean was recording a heat loss at a rate of -10Wm-2. That would kind of fit with the record increase in sea ice perhaps?

This is the part, below, where Durack concludes the models are probably right, and the observations are probably wrong. The black horizontal lines are the model predictions, and the diamonds in color are the observations. (Notice too that the period is 1970 to 2004, ending just as the ocean temperature starts to get measured properly for the first time.)

In their own words, the observations agree with each other, but not with the models.

“All but one of the four observational OHC trend estimates in Fig. 3b suggest a much smaller SH contribution, with stabilized ratios at timescales of 15 years and longer, well outside the intermodel standard deviation (0.500.63, MMM 0.56 versus 0.330.49 for observations).”

Astute reader Robbo says this is his favorite passage from Durack et al:

“Thus, it seems that our preliminary finding is robust: the SH contribution to the total upper-OHC change found in the five observational data sets is inconsistent with the CMIP model ensembles (Figs 3b and 4). The agreement between the observed and simulated SSH changes, the close correspondence between OHC and SSH (Fig. 2), and the better agreement of observed and simulated OHC for the recent Argo period (with improved SH coverage) suggests systematic model biases are not the dominant factor. We thus conclude, in agreement with previous works, that long-term observational estimates of SH upper-ocean heat content change are biased low.

If models are correct in their hemispheric partitioning of OHC changes, we can use them to guide observational adjustment over the data-sparse SH.“

Thus, the data is inconsistent with the models, therefore the data is biased, and we can use models to adjust the data.

“we adjust the poorly constrained SH estimates (Methods) so that they yield an inter-hemispheric ratio that is consistent with the MMM [multi-model-mean] (Fig. 4). When this adjustment is applied, the various observational estimates of 35-year global upper-OHC change are substantially increased in all cases.”

Who would have thought… after adjusting to the data to fit the models, they get a better agreement with the models.

I hear the ABC reported it as proof that it’s warming faster than we thought.

For those who want to gawk at the observations of the Southern Hemisphere heat content versus the models. Here is Fig 3 parts b, c, and d. Note how the observation lines almost all run entirely below the models.

*Satellite altimetry has its own problems. As near as I can tell, these are probably the same satellites that showed virtually no sea-level rise in the 1990s until they were calibrated against one tide gauge in Hong Kong, which is sinking compared to the four gauges around it. Durack says: “From 2005 to 2013, sea level rose at a rate of 2.78 ±0.32mmyr-1 .” Nils Axel-Morner and others like Beenstock have shown that hundreds of tide gauges around the world record an average rate of about 1mm a year or so. 182 gauges are showing a rise of about 1.6mm annually. In one location with long records and a lot of data about crustal movements of the land, Axel Morner estimates the rise is 0.8-0.9mm annually.  Llovel estimates steric sea level rise at 0.9mm.

Either way, without adjustments, the sea level rises shown by satellites would find a lot less “heat” content.

***Assuming the ARGO buoys are giving meaningful results, which I’m unconvinced of.

The deep heat is missing:

[Abstract] As the dominant reservoir of heat uptake in the climate system, the world’s oceans provide a critical measure of global climate change. Here, we infer deep-ocean warming in the context of global sea-level rise and Earth’s energy budget between January 2005 and December 2013. Direct measurements of ocean warming above 2,000 m depth explain about 32% of the observed annual rate of global mean sea-level rise. Over the entire water column, independent estimates of ocean warming yield a contribution of 0.77 ± 0.28 mm yr−1 in sea-level rise and agree with the upper-ocean estimate to within the estimated uncertainties. Accounting for additional possible systematic uncertainties, the deep ocean (below 2,000 m) contributes −0.13 ± 0.72 mm yr−1 to global sea-level rise and −0.08 ± 0.43 W m−2 to Earth’s energy balance. The net warming of the ocean implies an energy imbalance for the Earth of 0.64 ± 0.44 W m−2 from 2005 to 2013.

The models predicted an imbalance of about 0.69W/m2, so Llovel et al would be happy with finding the implications of finding an imbalance of “0.64W/m2.”  But this assumes that most of the observed sea level rise (as measured by tide gauges, rather than adjusted satellites) is due to warming oceans, not to melting ice or glaciers. If those satellite altimeters were calibrated against other tide gauges, the heat content could shrink by 50% – 70%. That would fit with the models overestimating warming by a similar degree, as well as fitting with the pause, which fits with the slowdown in sea level rise, but it does not fit with modelers mindsets.

The missing heat is “found” in missing data:

[Abstract] The global ocean stores more than 90% of the heat associated with observed greenhouse-gas-attributed global warming1, 2, 3, 4. Using satellite altimetry observations and a large suite of climate models, we conclude that observed estimates of 0–700 dbar global ocean warming since 1970 are likely biased low. This underestimation is attributed to poor sampling of the Southern Hemisphere, and limitations of the analysis methods that conservatively estimate temperature changes in data-sparse regions5, 6, 7. We find that the partitioning of northern and southern hemispheric simulated sea surface height changes are consistent with precise altimeter observations, whereas the hemispheric partitioning of simulated upper-ocean warming is inconsistent with observed in-situ-based ocean heat content estimates. Relying on the close correspondence between hemispheric-scale ocean heat content and steric changes, we adjust the poorly constrained Southern Hemisphere observed warming estimates so that hemispheric ratios are consistent with the broad range of modelled results. These adjustments yield large increases (2.2–7.1 × 1022 J 35 yr−1) to current global upper-ocean heat content change estimates, and have important implications for sea level, the planetary energy budget and climate sensitivity assessments.

The bottom line: energy can be neither created nor destroyed, so it has be somewhere. If it isn’t in the ocean (where 90% of the energy in the planet’s climate system is) then it’s probably in space.