Jean S revisited “Black Tuesday” with a post on Climate Audit. Even though I’ve seen these graphs before. It is still so arresting: 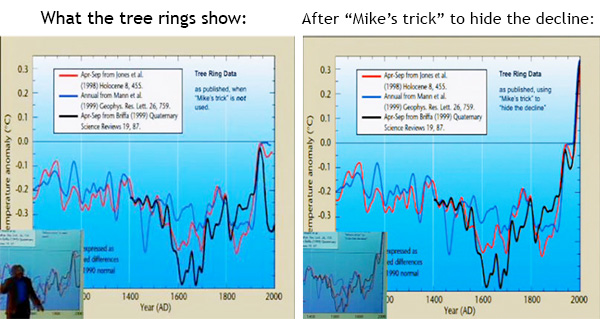 (Click to enlarge) Graphs from a Richard Muller presentation

People can debate the finer details of “splicing” but ultimately the second graph is deceptive. Do tree rings work, or don’t they?

When it comes to “tricks”, this is not like a trick to get the photocopier to work. It’s a trick to hide something (see that famous quote below). We don’t need a committee report to tell us whether it’s OK. It’s not science.

Climate Audit has well written a minute by minute breakdown of the emails at the time. (It was Barry Woods suggestion to add the graphs but they finish up at the end of the post.)

Jones writes  to the MBH crew (cc Briffa and Osborn) explaining WMO plans and exactly what the graph will look like.

Jones explained that the graph was intended for the cover of the WMO annual statement, which had a print run of 10,000. Jones said that he had voted against using the millennial series in the promotion because he knew that he had “oversold the advances in paleoclimate”:

The pertinent item from Geneva concerns the WMO statement on the Climate of 1999. WMO has been issuing these for the past 6 years. There are 10,000 printed each time. There were two possibilities for the front cover (1998’s showed the instrumental record from 1856) – the millennial long temperature series or the contrasting storm tracks for 1998 and 1999. I was the only one voting for the latter – partly personal as I knew I would have to organise the former. I was outvoted 12-1, maybe because in a brief presentation I oversold the advances made in paleoclimate studies over the last few years !

Jones explained the planned figure to MBH saying that the WMO wanted to use the millenial series on the cover and saying that each will be extended to 1999 with “instrumental data”. He also bragged about how important the widely distributed report would be “we are talking about 25,000 copies!”

After that Jones apparently begins to work with the times series. He’s ready 1:30 PM and sends the now infamous trick email. (Bradley appears to have commented already, but the email is not in the dossier.)

Once Tim’s got a diagram here we’ll send that either later today or first thing tomorrow.

Note that Jones clearly explained what he means by “Mike’s Nature trick”. Mann has claimed that his “Nature trick” was nothing more than clearly showing observations and reconstructions on the same graphic with proper labeling. But the direct comparison of observations to reconstructions is as old as statistics – and Jones and Briffa had themselves made such comparisons in prior articles without regarding clear labeling as anything more than elementary hygiene. In this email (which is often shortened in quotation), Jones says that Mann’s “Nature trick” is “adding in the real temps to each series for the last 20 years (ie from 1981 onwards) amd from 1961 for Keith’s”, as originally explained in November 2009 here.

Two hours later Michael Mann, who according to his legal documents “had absolutely nothing to do” with the graph (that is still worth a mention in his CV ), responds. He completely agrees with the text adding that it will “help to bolster the claims to be made in IPCC [AR3]“:

The text looks good, and I agree w/ everything that is said. I think its a strong but defensible statement, and will help to bolster the claims to be made in IPCC. The ’99 numbers are very interesting, and should help thwart the dubious claims sometimes made that El Nino is the sole culprit in the anomalous recent warmth.

Read it all at the emails of Black Tuesday

UPDATE: Added quote marks to the graph and headline to make it clear I am referring to the quote by Phil Jones of “mike’s trick”.