There are waves piling on waves in the weather.

A new press release tells us that there have been an “exceptional” number of weather extremes in summer.

Weather extremes in the summer — such as the record heat wave in the United States that hit corn farmers and worsened wildfires in 2012 — have reached an exceptional number in the last ten years. Human-made global warming can explain a gradual increase in periods of severe heat, but the observed change in the magnitude and duration of some events is not so easily explained.

Heatwaves lend themselves to headlines. Not only are they scary, but for climate researchers at a loose end, there are 1,000 flavors of wave to comb through. Is that a 3 day, 4 day or 7 day wave you are interested in? Is the cut-off 40C, 38C, 35C or a flexible percentile anomaly above the monthly average? Is it a statewide average, a national record, or a hot week in Houston? Shall we analyze that in seasons, by months, years, or part thereof? The combinations and permutations can keep a supercomputer up late at night. There’s a whole field of cherry trees ripe for the plucking.

It used to be that only long term trends mattered. Now, if something is “linked” to a “cluster” of noisy events over the last 13 years, go tell the world — why not?

Significance (the PNAS term for an abstract of the abstract)

The recent decade has seen an exceptional number of boreal summer weather extremes, some causing massive damage to society. There is a strong scientific debate about the underlying causes of these events. We show that high-amplitude quasi-stationary Rossby waves, associated with resonance circulation regimes, lead to persistent surface weather conditions and therefore to midlatitude synchronization of extreme heat and rainfall events. Since the onset of rapid Arctic amplification around 2000, a cluster of resonance circulation regimes is observed involving wave numbers 7 and 8. This has resulted in a statistically significant increase in the frequency of high-amplitude quasi-stationary waves with these wave numbers. Our findings provide important insights regarding the link between Arctic changes and midlatitude extremes.

Things are getting desperate for the long term climate forecasters when they start listing individual weather events one by one. This is tea-leaf reading from the dregs of the last 3 decades.

Are we adding “winter-like” temperature spells during summer to heat-wave events anywhere in the Northern Hemisphere? That can’t be right…

Fig 2 (See caption below. I split the wide figure)

It didn’t seem to me that heatwaves got worse in the last decade. But if history starts in 1980 I guess it’s quite possible. The graph below is next to the list above, of  “resonance months”.

Fig. 2. Number of July and August resonance months identified by Petoukhov et al. (16) for  eight 4-y periods from 1980 to 2011. Text in the gray bars indicates the actual months with, in brackets, the wave number involved in resonance, and the table on the left lists the associated extreme weather events (adapted from ref. 16). The red line plots the difference of surface warming in the Arctic (north of 65°N) and in the rest of the Northern Hemisphere (south of 65°N), illustrating the much more rapid surface warming in the Arctic since 2000.

Resonance months refers to a particular effect in Rossby waves:

An important part of the global air motion in the mid-latitudes normally takes the form of waves wandering around the globe, called Rossby Waves. When they swing north, they suck warm air from the tropics to Europe, Russia, or the US; and when they swing south, they do the same thing with cold air from the Arctic. However, the study shows that in periods with extreme weather, some of these waves become virtually stalled and greatly amplified.

“Behind this, there is a subtle resonance mechanism that traps waves in the mid-latitudes and amplifies them strongly,” says Stefan Rahmstorf, co-author of the study to be published in the Proceedings of the US National Academy of Sciences (PNAS).

How significant would the latest resonant months trend be in a graph that includes life before 1979?  Hard to say.

If resonance months and heatwaves are connected… 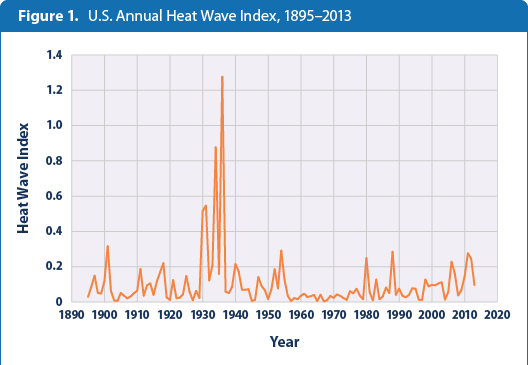 This figure shows the annual values of the U.S. Heat Wave Index from 1895 to 2013. These data cover the contiguous 48 states. Interpretation: An index value of 0.2 (for example) could mean that 20 percent of the country experienced one heat wave, 10 percent of the country experienced two heat waves, or some other combination of frequency and area resulted in this value.Data source: Kunkel, 2014 5

Other posts on Heatwaves  and Extreme weather.

Get Headlines! How to find a heatwave in five easy stepsEight reasons the Australian heatwave is not “climate change”