That deep heat almost seems to coincide with Atlantic and Southern Ocean volcanoes?

All roads lead to the ocean. This time, though, we’re talking about the mysterious deep abyss, below 2,000m and even below 3,600m. Wunsch et al, claim the data shows the deep ocean cooled by one hundredth of a degree in the last 19 years. But they admit that really… this could just be noise. (Well, shock me.) But they have some new and glorious heat maps, and I use those to do some wild speculation about volcanoes.

When all is said and done, there are three inescapable oceanic truths:

Despite the 95% certainty among 97% of certified “climate scientists”, no one can find that energy. Thus the social-science-fact meets the physical-science-fact. Which “fact” should we spend billions on? The stone-age approach is to go with the “doctors” not the data, and western civilization seems pretty comfortable with that.

In the end, the uncertain data and lower-than-expected warming are the foundations under the “95%” certainty, and those statements should be accorded all the scientific respect that any political slogan deserves.

The first map shows how patchy the ocean is, which makes it all the more difficult to measure accurately.

Secondly, Wunsch slice through the depths, so we can see that the top 700m is warming near Greenland, and in the Western Pacific. But the potential hot spots below 2000m areon the other side of the planet. How curious?

The warming in the bottom half of the ocean is mostly near the southern Atlantic and West Antarctic Peninsula.

Likewise the deepest ocean is warming in the Southern Atlantic and near the Antarctic.

Figure 17: Same as Fig. 14 except for 3600 m to the bottom. Note the cooling in the deepest parts
of the western North Atlantic, the entire eastern basin, Pacic and Indian Oceans. Warming of the
Antarctic Bottom Water has been discussed recently by Purkey and Johnson (2013) among others. In
the present context, it is a comparatively small water mass. Warming in the Atlantic sector Southern
Ocean is particularly conspicuous.

What about those volcanoes?

Wunsch et al don’t mention volcanoes. Nor could I find a good map of submarine volcanic activity, especially not with depth topography. But I’m going to toss the idea out there anyway.  We know submarine volcanoes lie under the warming parts of West Antarctica in the far south-east Pacific (near Chile). We also know water currents (both deep and shallow) flow from west to east around the Antarctic. So if those volcanoes were warming the water, presumably the warmer water would get carried to the Southern Atlantic.

The mid Atlantic has a ridge of undersea volcanoes running up and down it, notably under the deep hot spot in the Southern Atlantic. What we don’t know would fill the deep abyss though. And if volcanoes are warming the deep, you would think we might see more warming around the Western Pacific which is warming in the top 700m, but not apparently down the bottom. I’m left with more questions than answers. Are those Western Pacific volcanoes shallow, is the heat map remotely accurate, or is the hypothesis of volcanic deep water heating just junk? Who knows.

This poor substitute shows Earthquakes — not volcanoes — and what we really need is a map of submarine active volcanoes, can anyone find one? 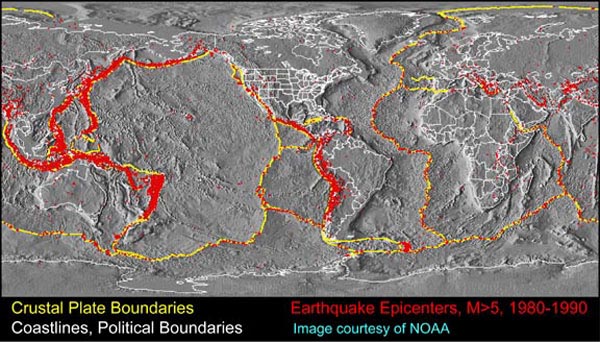 …There was also a chain of explosive undersea volcanoes near Norway at 3000m down. They aren’t showing on the heat maps, unless they are generating heat south of greenland in the top 700m. Maybe the just isn’t the temperature data at 300m below the Arctic? Maybe the hypothesis is wrong?

Graham Lloyd does the “right thing” and asks the pro-man-made-warming experts:

The Australian: A recent paper by Matthew England, executive director of the climate change research centre at the University of NSW, said the global surface temperature “hiatus” could be explained by increased winds in the Pacific Ocean. The paper claims the strong trade winds, which pushed heat deeper into the ocean, explained why climate models had not matched physical observations on global temperatures, a key area of dispute between climate scientists and sceptics.

But if he’d asked skeptical scientists as well as unskeptical ones, it would have been even better. I could, for example, have said that paper by Matthew England finally picked up the message that skeptics have been saying for years.  The fans of alarming models don’t seem to have the intellectual honesty to admit they were wrong. They post hoc adjusted predictions to fit, they found the models that worked the best were the ones that predicted only 2C of warming, implying the other models exaggerated the warming (as skeptics have been pointing out).

As I said in February about the England paper, they conscripted a new variable, and it wasn’t even a forcing:

The Australian: Here’s how it works — Monkey modelers make a guess, get it wrong, but instead of tossing the model or reassessing all their forcings they fish for new factors to conscript to get the least-worst outcome. The new factors are not necessarily forcings (which gives the monkeys lots of scope) but could be any half-credible variable that happens to show the right slope on the graph at the right time. There are a thousand leading indicators in our planetary climate, not to mention a million ways to measure them. By cherry picking the magic factor, the “predictions” change post hoc to fall “within the error bars” and can again be called “consistent” – at least until the next time they fail. Et Voila:  a new paper, a conference keynote, a two week junket and a three year grant. Blessed are the ABC for they have another pointless press release to be vacuumed and shared. Thanks go to the ARC for funding the monkeys*.

Judith Curry concludes: “All in all, I don’t see a very convincing case for deep ocean sequestration of heat.” Ditto for me.

The nub of the problem is that, inasmuch as we can measure it, the warming is not enough and the uncertainties are too large.  The oceans average a bit less than 4km deep around the world, so half the water on our planet’s surface is there, but there are almost no measurements.