Filed under: A Curiosity for a Friday 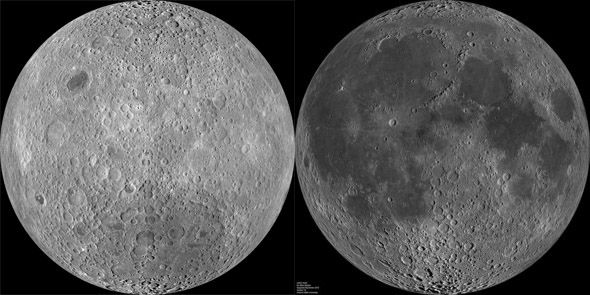 The far side (left) does not look like the near side (right) there are no maria or “seas” on the far side.

For 55 years some people have wondered why the near and far side of the moon look so different. (I can’t say it had occurred to me, but the answer is very cool anyway.) The far side of the moon has none of the dark flatter pans or seas called maria – instead it is covered from top to bottom with craters.

What I find even more amazing is that the Earth and Moon have been locked in an orbital dance where the same side of the moon always faces the Earth, round and round, and it goes on for billions of years. (Yes, and how do they know, I also wonder, but there is an answer below.) In any case, here’s a new theory that might explain the difference between the near and far sides. It’s very neat.

The Earth and Moon have a rather extraordinary relationship. Not long ago we heard how the gravitational tidal forces between them are so strong it causes tidal bulges in the rock of the moon that lifts moon-rock by 50cm in a roaming bulge that follows the Earth. And we know the Moon causes a daily shift in 70% of the matter on the Earth’s surface.

A Mars-sized impact may have formed the moon.

But as you ponder this intricate relationship of Moon and Earth, remember the moon definitely does not affect Earth’s climate. I know because a CMIP5 climate model told me so…

(By the way, the far side is also called the dark side, which doesn’t make much sense in the usual meaning of “dark” because it is not dark to sunlight, just to all eyes on Earth.)

This mystery is called the Lunar Farside Highlands Problem and dates back to 1959, when the Soviet spacecraft Luna 3 transmitted the first images of the dark side of the moon back to Earth.

The new idea that the strange difference in the near and far side started right at the beginning. If the Moon was made when a Mars size body smacked into Earth — the reasoning is that it would have left them both hot – as in 2,500C hot. The Earth and Moon became locked together in orbit from the start, with the same side of the moon facing Earth – and the molten minerals gradually were sorted into a gradient. It’s a bit of a supersized centrifuge — eventually the far side of the moon had more aluminium and calcium. The story goes that side would have cooled and hardened first with a thicker crust because the Earth heated the near side a bit more, or just slowed the cooling — like a kind of Earthshine effect. Then when meteors hit the thinner crust on the near side, lava welled out into big flat pools forming the maria.

Look, it sounds believeable. Who knows? I’m just drawn to the big ponderables…

The Earth and the impact object did not just melt; parts of them vaporized, creating a disk of rock, magma and vapor around the Earth.

“The moon and Earth loomed large in each others skies when they formed, ” said Roy.

The geometry was similar to the rocky exoplanets recently discovered very close to their stars, said Wright. The moon was 10 to 20 times closer to Earth than it is now, and the researchers found that it quickly assumed a tidally locked position with the rotation time of the moon equal to the orbital period of the moon around the Earth. The same real estate on the moon has probably always faced the Earth ever since. Tidal locking is a product of the gravity of both objects.

The moon, being much smaller than Earth cooled more quickly. Because the Earth and the moon were tidally locked from the beginning, the still hot Earth — more than 2500 degrees Celsius — radiated towards the near side of the moon. The far side, away from the boiling Earth, slowly cooled, while the Earth-facing side was kept molten creating a temperature gradient between the two halves.

This gradient was important for crustal formation on the moon. The moon’s crust has high concentrations of aluminum and calcium, elements that are very hard to vaporize.

“When rock vapor starts to cool, the very first elements that snow out are aluminum and calcium,” said Sigurdsson.

Aluminum and calcium would have preferentially condensed in the atmosphere of the cold side of the moon because the nearside was still too hot. Thousands to millions of years later, these elements combined with silicates in the moon’s mantle to form plagioclase feldspars, which eventually moved to the surface and formed the moon’s crust, said Roy. The farside crust had more of these minerals and is thicker.

Researcher Jason Wright has more on his blog about this:

1) The Moon has probably always had the same face towards the Earth, even during formation.

2) The Moon’s formation was a messy business, with vapor phase likely to have been important.

3) Earthshine was an important component of thermal energy budget of the post-giant-impact system, and should have produced a chemical gradient in the protolunar nebula and proto-lunar atmosphere.

4) The present-day chemical dichotomy on the Moon looks an awful lot like the result of the condensation gradient one expects from Earthshine.

Wright also goes into detail about why he is sure it was tidally locked from the beginning.

The tidal locking timescale goes as the sixth power of the distance between the Moon and Earth, so when it formed it was very strongly tidally damped.  The would have lost an e-folding of rotational energy every 100 days or so, and since this less than the time it took to form, the moon essentially formed tidally locked.  Unless a subsequent impact spun it up (or down) again, the Moon has always had the same side facing the Earth!

The moon has no effect on the climate (…models)

Lunar effects are not considered in the Solar Model, nor in any GCM. We don’t know if either would perform better with some lunar forcing. The connection between these bodies seems very strong for those orbital patterns not to have some possible effect on our climate.

And on that note, see Ian Wilson’s idea: Can the Moon change our climate? Can tides in the atmosphere solve the mystery of ENSO?