Bad news for the environment. Obama has a plan.

The proposal will aim for a 30 percent cut in carbon emissions by 2030, according to the WSJ

The Obama administration is set to announce its draft proposal to cut carbon emissions from existing power plants at 10:30 am ET Monday morning, but the Wall Street Journal claims to have the early scoop on the basics.

The Environmental Protection Agency is seeking a 30 percent reduction in carbon dioxide emissions by 2030 from existing power plants based on emission levels from 2005, “two people who have been briefed on the rule” told the WSJ. That’s considerably higher than the 20 percent cut that had been predicted – although, because CO2 emissions have already been on the decline in recent years, not as stringent as it would have been should the administration chosen 2010 or 2012 as a baseline. The EPA refused to comment before tomorrow’s release. [read more]

I’m sure China, Brazil and India are grateful…

American ingenuity may yet win the day despite the pointless ball and chain. 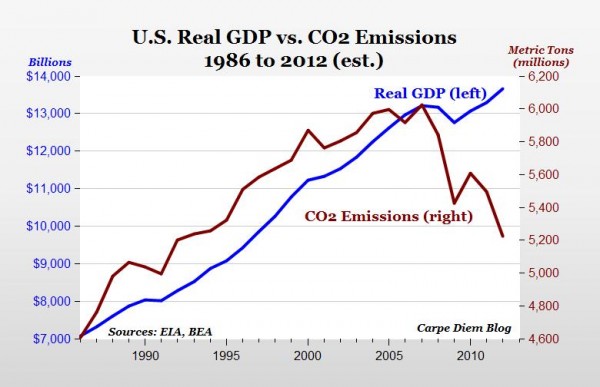 Then again, Greens ought be very concerned at Obama’s new plan. In nearly every country where governments have tried to reduce CO2, the emissions have risen. Getting the government involved could spell the death-knell of US achievements in reducing CO2.

The US States may yet be able to limit the damage:

The opposition to Obama’s new carbon emission standards has been strongest in some states that have large coal-mining industries or rely heavily on coal to fuel their electricity. State officials say the new federal regulations could jeopardize the jobs of thousands of workers and drive up the monthly electric bills of residents and businesses.

It remains to be seen whether new measures passed by the states will amount to mere political symbolism or actually temper what’s expected to be an aggressive federal effort to reduce the country’s reliance on coal. But either way, states likely will play a pivotal role, because federal clean air laws leave it up to each state to come up its own plan for complying with the emission guidelines.