The Gallup poll results for May show the environment is not the most important issue for 97% of Americans.  Golly, but those naming the environment as the top concern tripled from 1% – 3% from April to May. It’s a blip up in a long term trend that’s falling. H/t to Brietbart.com.

How many times do people need to tell politicians that being a skeptic isn’t  the vote killer that some commentators would like you to believe? Even people who believe in man-made global warming just aren’t as concerned about the environment as they are about jobs, corruption, and the economy.

Which politician will make cleaning out corruption their trademark policy? 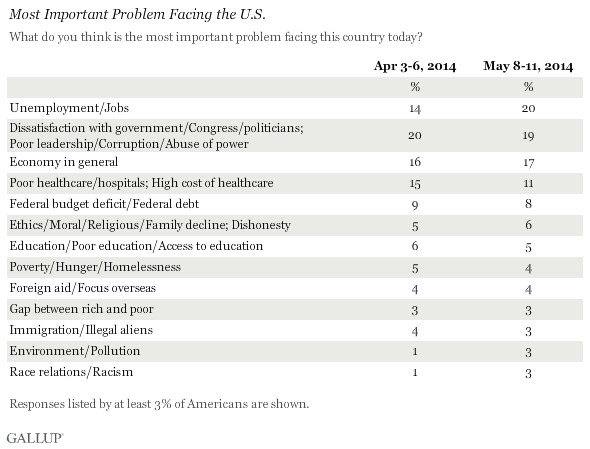 According to some the media doesn’t report on climate often enough. But where’s the “balance” — if 97% of the public are more concerned about something else, perhaps the message should be something else?

For those all-knowing super intelligent beings who protest that the public won’t worry about the right things if you don’t tell them, we can only ask if 20 years of non-stop campaigns, reports, advertising, documentaries, and Nobel Prize winning (flawed) documentaries are enough?

There comes a point where it’s time to say the public have heard it all, and they are still not convinced.