Friday curiosity: Duck-diving Cuvier’s beaked whales can hold their breath for over two hours, and reach a depth of 2 miles (3.2 km) underwater. What’s more, when they come up, they recover in an unbelievable two minutes. (Actually, I really do find this hard to believe. Two minutes? Seriously? ) 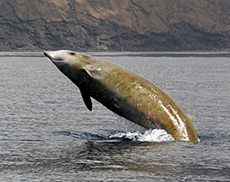 These whales can go four times deeper than modern nuclear submarines which are estimated to have a hull crush depth of around 730m. Presumably the Department of Defence will be looking into blubber power or nuclear whales.

But seriously, whales and seals can hold their breath for a ridiculously long time because they pack a lot of oxygen away in their muscles — it’s attached to myoglobin which they have in abundance. Myoglobin‘s quite a lot like the haemoglobin molecule found in blood, it uses iron to bind the oxygen.

For a completely useless culinary tip, whale meat is thus the absolute reddest-of-red-meats and very iron rich —  “perfect” then,  for anemic vegetarians.

Scientists monitored Cuvier’s beaked whales’ record-breaking dives to depths of nearly two miles below the ocean surface and some dives lasted for over two hours, according to results published March 26, 2014, in the open access journal PLOS ONE by Gregory Schorr from Cascadia Research Collective and colleagues.

Distributed throughout the world’s oceans, the Cuvier’s beaked whales’ frequent dives deep into the ocean make them difficult for researchers to study. Previous studies using short-term tags (~ 215 hours of data) have indicated that this deep-diving species might be the most extreme breath-holding diver in the ocean. To better understand this behavior, scientists analyzed data from satellite-linked tags that recorded the diving behavior and locations of eight Cuvier’s beaked whales off the Southern California coast. Researchers collected over 3,700 hours of diving data, including depth and time of each dive.

Researchers recorded 1100 deep-dives, averaging 0.87 miles deep, and 5600 shallow-dives, averaging about 0.17 miles deep. The deepest dives recorded was one that reached nearly two miles below the ocean surface, and the longest lasted 137 minutes. The dives captured by this study not only exceed the previous Cuvier’s beaked whale diving records of ~1 mile deep and 95 minutes, but also the current mammalian dive record previously set by the southern elephant seal at ~1.5 miles deep and 120 minutes. One striking difference compared to other divers is that deep-diving elephant seals and sperm whales require an extended recovery period after long, deep dives, whereas Cuvier’s beaked whales average less than two minutes at the surface between dives.

According to the authors, the results of this study provide a better understanding of the unique diving capabilities of this species, which accounts for 69% of recorded marine mammal strandings associated with military sonar operations. However, all eight whales were tagged on a Navy sonar training range off the west coast of California and spent significant portion of their time there, suggesting that these animals may have learned to cope with anthropogenic disturbances that cause stranding in Cuvier’s beaked whales elsewhere. “It’s remarkable to imagine these social, warm-blooded mammals actively pursuing prey in the darkness at such astounding depths, literally miles away from their most basic physiological need: air,” added Greg Schorr

*Move on the Seawolf-class sub, say hello to the Seawhale. I hear the Seawolfs may soon not have so many Tomahawks to fire anyway, in which case, wolf-whale: what’s the difference?