UPDATE: Commenters are reporting that the bio page has changed. Does anyone have a screenshot of the original? – Jo

A friend at Curtin University, Western Australia reports that a new mysterious and imposing mural appeared on the facade. It is as if passers-by can look through the bricks and see a Saint-of-Science himself working.

The words on the plaque (which must be something like 5m wide) read “Inside our walls Professor Richard Warrick is continuing the climate change research that led to a Nobel Peace Prize. “  (Sing Hallelujah and praise Al Gore). 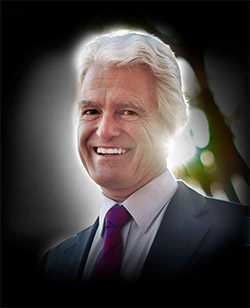 From the anonymous dissident within the enclave:

“We were showered with press releases when Richard Warrick joined Curtin last year… we have our own piece of the IPCC here with us! It’s the closest most of us will ever get to touching the holy hockey stick. (I heard stories that blind students have regained their sight after touching Curtin’s sacred wall)

“Warrick’s bio pages say that he is a “co-recipient of the Nobel Peace Prize” and that “he shared a Nobel Peace Prize with former U.S. Vice President Al Gore and other selected IPCC authors in 2007.” And the Nobel Prize appears in that mural, too, and this official Curtin page too. If he stretches the facts so much in his own bio, shall I trust the results of his research?

Everyone knows these Nobel  claims are just an empty fawning political embellishment. Firstly, good scientific work gets a science prize, not a peace prize. Secondly, a peace prize is worthless even as a peace prize  since Obama got one for 11 days of just being in office.

Not only is the peace prize meaningless, but Prof Warrick didn’t get one, even the low-standard Nobel committee themselves say so. With every tom-dick-and-michael-mann connected to the IPCC suddenly claiming to be a Nobel Laureate, the Nobel committee declared that it was not so.

The official word as quoted by Donna LaFramboise:

“the IPCC issued a statement contradicting Pachauri’s 2007 proclamation. It says the prize was awarded to the IPCC as a whole “and not to any individual associated with the IPCC. Thus it is incorrect to refer to any IPCC official, or scientist who worked on IPCC reports, as a Nobel laureate or Nobel Prize winner.”” h/t to Chris Horner at WattsUp.

What’s most disturbing about this is that this pandering obsession with turning scientists into Gods is profoundly unscientific. It’s a mark of how weak the intellectual standards are. Not only did the Nobel committee award a political organization with peace prize for achieving exactly no peace, they lauded a group who call themselves scientists but behave as political activists. IPCC-science means hailing hockey-sticks created from misused-maths, the wrong proxy, and hidden and censored data. The Hockey-stick will achieve fame like the Piltdown Man, and the Nobel Prize now deserves all that glory. Far from seeing through the fake aggrandizement, the intellectuals in Academic-world crawl in servility to it, as if it were an achievement instead of a joke.

“I remember Medieval historians pointing out that there were hundreds of true pieces of the Cross everywhere in Europe, several heads of the Baptist, who knows how many fingers of St Peter, etc. One day we should try to count how many “recipients of the 2007 Nobel Peace Prize” are populating academia these days.

“For those who want to worship on site — look for the John Curtin Building/BankWest Lecture Theatre. 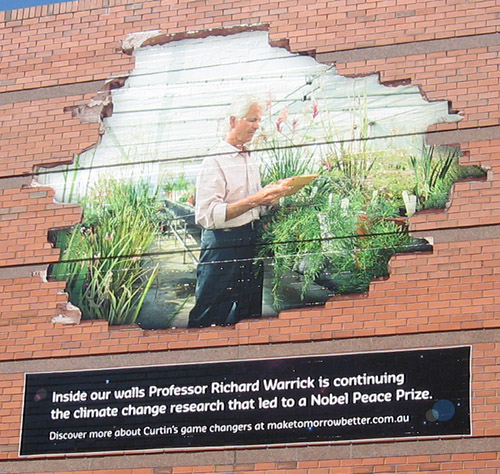 Up close, the loving details appear.

One day when it is safe to talk about climate at Australian Universities I shall reveal the dissident’s name. The spy, by the way, is as much “a co-recipient of the Nobel Peace Prize” as Warrick is. (Like “everyone” else eh?).