Who could’ve dreamed up the script for this one? If you are following the saga of the climate-scientists stuck in sea-ice-they-think-is-shrinking,  the latest patchy news is that the icepack is so thick and so wide that the Chinese rescue icebreaker is also stuck and has been for a day or so. It can’t send out the helicopter to pick up the scientists on the Russian chartered boat, the Akademik Shokalskiy, until it is clear of sea ice, and the wind has slowed. The Australian ice-breaker now is trying to free the Chinese ice-breaker (the Shokalskiy is too far into the ice pack). The 74 passengers on the Shokalskiy are waiting for either the helicopter to come, or, with more luck, the wind to change and the ice to break up.

Never before in modern satellite media communications has it taken so many journalists to say so little, so slowly and so vaguely.

Who would have believed it? The expert climate scientists have a media-crew-on-a-satellite link on-board, but they don’t have a meteorologist with access to the weather and wind information they needed. (If they did, perhaps they might have seen that ice coming?) The stuck scientists “phoned a friend” who called a friend, and one thing led to another, and before you know it, Johnathon Coleman (skeptic and meteorologist) is calling Anthony Watts (major skeptic blogger and meteorologist) and they are doing all they can to get the right information down to the people on the ship. As you would, good on them.

UPDATE#1: See Coleman KUSI on this video for the info. Skeptics Joe D’Aleo  and Joe Bastardi of Weatherbell were also part of the team of meteorologists.

Don’t expect to find out about this twist  of the mainstream media though (KUSI aside), where The ABC and others won’t mention the phrase “climate change” when reporting this fiasco. In the magical world of media spin, a boat full of mostly Australian climate scientists has turned into a Russian passenger ship stuck in ice. (See my post where media crew on-board take hours to get the news out and everyone pretends this mission was not about promoting climate fear via the BBC World Service. See also Andrew Bolt’s take on the 7:30 report tonight.) The media contingent is so large on this mission there is not only a BBC journalist, and two Guardian reporters, but it also includes two Fairfax reporters on board the Aurora Australis as well. Never before in modern satellite media communications has it taken so many journalists to say so little, so slowly and so vaguely.

BTW: Note the mystery message on the deck of the Aurora Australis (Seen in the SMH article). What could it mean? 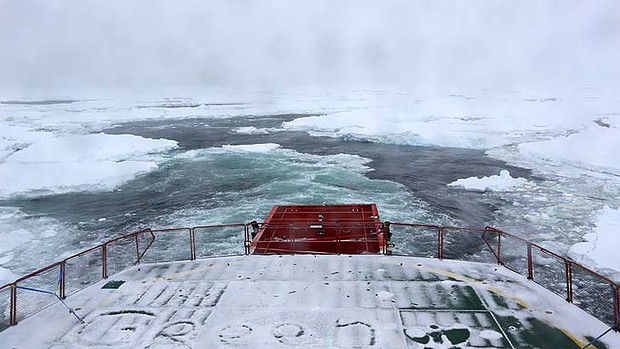 Anyone know what it costs to rent an icebreaker for a day?

If things get worse there is a bigger American icebreaker which is coming to restock an American Antarctic base, and could get there in a week or two. If things go seriously (but slowly) pear shaped, there is a Russian icebreaker called the Federov, a mere 28 days (and a gazillion roubles) away. Ponder the cost of unexpectedly diverting 3 – 5 boats and full crews to the end of the Earth in dangerous conditions to rescue a boatload of experts and documentary crew on a reenactment and “raising awareness” mission. They were trying to let the world know about melting ice but instead ended up singing songs on deck, and bragging about how much they are enjoying their adventure, while taxpayers probably foot most of the bill, real researchers lose valuable help and resources, and real sailors risk their lives trying to get them out. It’s a bit like the ultimate school leavers party for those who never grew up.

Australian taxpayers have paid for much of the $1.5m mission (by proxy though agents and are quaintly referred to as “supporters”) with help from UK, US and New Zealand taxpayers too. But who will cover the cost of the rescue? (Speaking of which, I discovered that if we were serious, there are even nuclear icebreakers around Russia which apparently cost $100,000 a day.)

Volunteers to pay weren’t coming forward with too many donations at the Spiritof Mawson site. As usual, much of the money for the grand adventure comes from coerced payments. And most of the people on board the Shokalskiy would probably say they like “free market” solutions. Right? (Except when they prefer forced ones.)

Who authorized the expedition? Was there a cost-benefit study? Who is responsible?

Naturally, despite the entertainment, schadenfreude and all, we feverently hope everyone involved stays safe.

If you have the urge, you can check the webcams off the Aurora Australis icebreaker here . It’s still light — of course — all night in Antarctica, so I guess they can work at 3am if the conditions are right.  At the moment, judging from tweets I’d guess that could be the Chinese vessel in the background in this shot (though the port camera shot at 11pm will change as the boat moves). Victor Cauchi ‏@tightorbit commenting in #spiritofmawson seems to know something. (I don’t.)

The Aurora Australis is designed to break through level ice that’s up to 4 feet (1.23 meters) deep, at a speed of 3 mph. It can handle thicker layers if it backs up and rams the ice. But the fused-together ice floes that surrounded the Shokalskiy were just “too thick to penetrate,” Captain Murray Doyle told the Sydney Morning Herald.

America’s icebreakers
AMSA’s Rescue Coordination Center is in charge of the rescue effort, but the fact that a Chinese ship is playing such a key role points to the international cooperation that’s often required for Antarctic operations. The U.S. Coast Guard currently has two Seattle-based polar icebreakers in service: the medium-class Healy, which recently wrapped up an Arctic expedition; and the heavyweight Polar Star, which is en route to Antarctica to clear a channel to the U.S. base in McMurdo Sound.

The Polar Star is just returning to service after a years-long, $90 million overhaul. It’s designed to get through a 6-foot-thick (2-meter-thick) layer of ice when it’s sailing at 3.5 mph — and when it’s in its backing-up-and-ramming mode, it’s capable of handling ice that’s up to 21 feet (6.5 meters) thick.

“Sometimes you have to get a running start,” the Polar Star’s captain, George Pellissiere, told NBC News from the ship.

At the time that NBC story was filed, the Polar Star was on “standby” but had not been officially asked.