What I found most interesting about this was the skill, dedication and length of meteorological data taken in the 1800’s. When our climate is “the most important moral challenge” why is it there is so little interest in our longest and oldest data?

Who knew that one of the most meticulous and detailed temperature records in the world from the 1800’s comes from Adelaide, largely thanks to Sir Charles Todd. The West Terrace site in Adelaide was one of the best in the world at the time, and provides accurate historic temperatures from  “Australia’s first permanent weather bureau at Adelaide in 1856″. (Rainfall records even appear to go as far back as 1839.)  Lance Pidgeon went delving into the National Archives and was surprised at what he found.

If we want to understand our climate the records from the 1800’s in Adelaide are surely worth attention?

The BOM usually shows graphs like this one below starting in 1911. You might think you are looking at the complete history of Adelaide temperatures and that smoothed temperature is rising inexorably, but the historic records remain unseen. While “hottest” ever records are proclaimed in the media, few go hunting for older hotter records. Yet, one of the hottest temperatures recorded in Australia were recorded in 1828, and raging heatwaves with temperatures over 50C occurred in the 1800s. In 1896 a monster heatwave across the nation killed hundreds, and people were even evacuated on emergency trains. 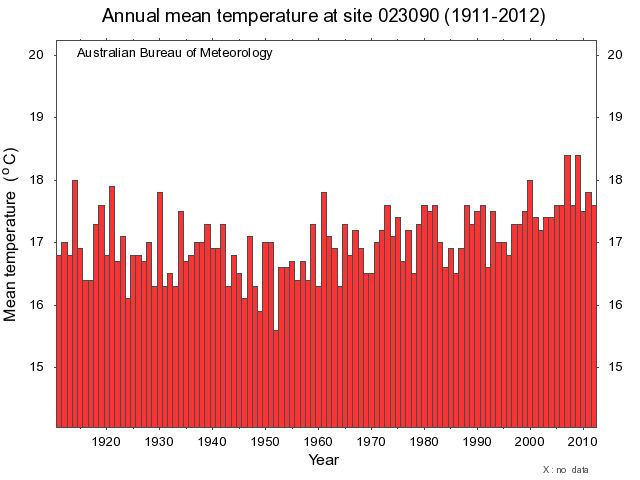 The old equipment was not identical to modern stations, but it was recorded diligently and with expert attention, and in the same location for over 120 years. When compared side by side, the older types of screens produced slightly more  extreme temperatures than the Stevenson screens but this does not mean that the old recordings should be forgotten. With careful adjustment the Adelaide record could be one of the longest in the world. Strangely, no one seems too interested. If these old records showed Adelaide was way cooler in the 1860’s, do we suppose an eager PhD student would not have jumped at the chance to splice historic old and new records into a long alarming graph and a popular thesis? The question begs…

I fear the cult of the young means the smarts of the oldest of old-timers is automatically discounted, yet those old codgers  from the 1800’s  weren’t necessarily old at the time, and were connected to the harsh realities of the natural world in way that soft cushy net-connected university grads could not imagine today.

Below, notice how commonly those red spikes go about 40C? Adelaide gets scorched nearly every year. It’s summer.

Thanks to Lance for his work and his patience.

Amongst the best temperature recordings taken anywhere in the world were the recordings taken at the West Terrace Adelaide observatory by the scientist, astronomer, meteorologist and pioneer of Australian post and telegraph, Sir Charles Todd K.C.M.G.  M.A. F.R.S F.R.A.S. F.R.M.S F.S.T.E.

Here thanks to Chris Gillham is the chart you get from the BOM West Terrace data in Adelaide. It could be even longer! (What a shame the West Terrace data stops in 1979). As it is, we see how incredibly constant the average temperature was.

Summary of the old Adelaide data…Nothing to see here. Move along!

How good is this old data?

Temperatures were recorded concurrently at Adelaide via multiple different methods using many different types of stands and equipment. Even the temperature at various depths under the ground was recorded but the most basic of these fantastic old records does not show on the BOM raw temperature data record here before 1887.

“The temperature of the soil is also ascertained by mercurial thermometers, whose bulbs are respectively 8, 5, and 3 feet beneath the surface.” 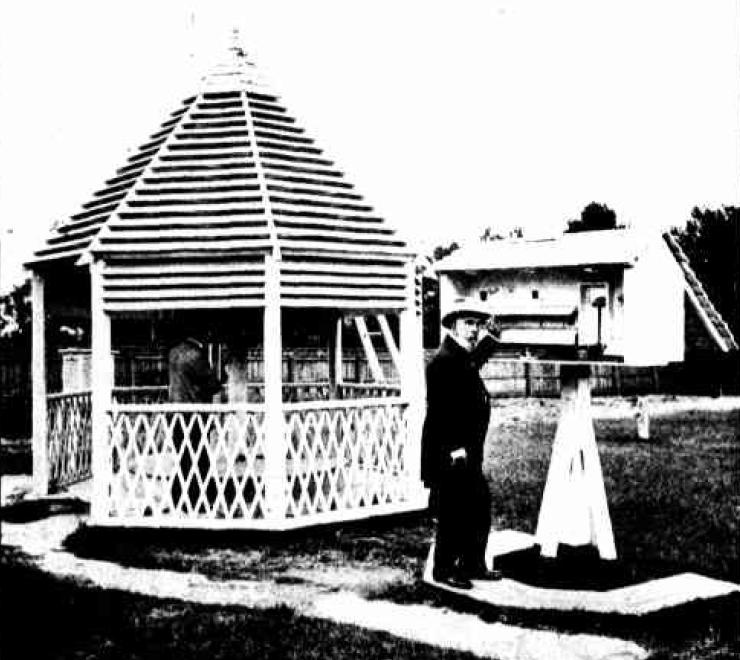 Could these old measurements be wrong?

The page below gives a clue to the detail and care these measurements were taken with. It is from the book “Meteorological observations made at the Adelaide observatory 1896”. Click on the page to read it.

A page from the book “Meteorological observations made at the Adelaide observatory 1896. Anyone who would like to see this series of books and others like them online should write to the National Library and ask. If enough requests come in they will scan them.

The problem solved! This picture from 1930 shows another Stevenson screen away from the shadow and to the east of the thermometer house.

The modern Adelaide screen at Kent Town may have the opposite problem. The sloped windows on the front of the BOM building may be warming the area via reflection from the sun.

While you ponder the effects of shadows and reflections near Stevenson screen boxes, notice that May 1910 is missing from both the minimum and maximum BOM West Terrace raw data.

May 1910 was a warm month. With so many different thermometers in that same place it is known. It is possible to see this because the BOM is not the only keeper of records.

“The month has been very mild, the mean temperature at the Observatory (59.8) showing an increase of 2.1. The nights were, comparatively speaking, warmer than the days, for the mean of the minima, or night temperatures, was 2.6 above, while the mean of the maxima, or day temperatures was only 1.6 above The minimum temperature only fell below 50 deg. on six nights, whereas the average number in May is 15.” …..”Average of previous 51 years”

The Fahrenheit temperatures above would have come from the Greenwich/Glaisher stand.
National Library of Australia

What else may be forgotten each time we hear “since records began”?

“Todd’s meteorological plan, which he had submitted in 1856, depended on a network of observation stations which were required to report daily to the observatory. The telegraph system was the answer; he trained his own observers, including interested private individuals. Growth was slow initially and it was not until 1860 that the observatory was ready with the necessary instruments and fourteen selected stations. As the telegraph system expanded so did the meteorological stations, with a greater impetus ten years later when post offices came under Todd’s control.”

“With the building of the Overland telegraph in 1855, Charles Todd, aged 30, as Superintendent of Telegraphs, established meteorological stations on every route where he constructed telegraph lines in New South Wales, Victoria, South Australia’s Northern Territory and Darwin. Todd organised the real time collection of the data by telegraph and began the preparation of synoptic maps. By the 1870s, and throughout the 1880s and 1890s, the meteorological data from the telegraph stations saw an increasing use of synoptic charts of pressure, wind, temperature and rainfall for daily weather forecasting.”

“Todd soon became responsible for setting up and supervising a network of meteorological stations. According to his plan of 1856 his observation stations were connected by telegraph and were able to report their findings daily to the Adelaide Observatory.”…..”He was also the first to make the connection between droughts in Australia and India due to a phenomenon known today as El Nino. “