Showing that academics can cost the country more than they return, ANU’s Geoff Cary posits that there is an 80% consensus (an unmeasured, meaningless statistic) that there will be more fires in Australia 60 years from now.

This is an opinion about opinions of experts who use models that we know can’t predict temperatures. Not only is this “fact” already piled three layers of nonsense deep, the most abjectly stupid point is the fourth layer, the pretense that these models might, in their wildest dreams, be able to predict rainfall — which is an order of magnitude harder than just predicting global temperature. Predicting bushfires is dependent on knowing not just total rainfall in one region, but how that rainfall is spread throughout the year. Not to mention that bushfires depend on wind speed, wind direction, land-use (fuel load), and humidity.

Everyone knows that different climate models predict both higher and lower rainfall in the same areas at the same time, and the type of phrases used to describe the ability of climate models are: “low confidence”  (National Centre for Atmospheric Research),  “irrelevant with reality” (Koutsoyiannis ), or an “absence” of skill (Kiktev). Compare the different projections of climate models below, which model is right.

Predictions of changes in bushfire 60 years hence are thus equivalent to alchemists attempts to turn lead into gold. These are National Tea-leaf Readers, and they are not only afforded nice salaries and all the accoutrements, but given space in our national news as if they had something remotely useful to say.

Australian National University’s Geoff Cary said a projected lift in temperatures of more than 2C would probably mean much more bushfire activity across the country.

“There’s an 80 per cent consensus indicating that increased fire activity into the future is highly likely,” he told reporters in an online Australian Science Media Centre briefing.

Associate Professor Cary said in areas with wet climates, like Tasmania, bushfire risk could double over the same period.

“In the Tasmanian climate, the future scenario for 2070 which is warmer and drier suggested a … 70 to 100 per cent increase in area burnt,” he said.

However, he predicted bushfires would burn far less area in central Australia by 2070 as hotter, drier, weather reduced the amount of fuel blazes had to feed on.

“We predict a significant decrease in the area burnt,” he said.

On rainfall, there is almost always one model that is “right” because there are so many models and they all say different things.

Here are comparisons of 5 different models over Australia. Is CSIRO Mk 3.6 the “right” model? 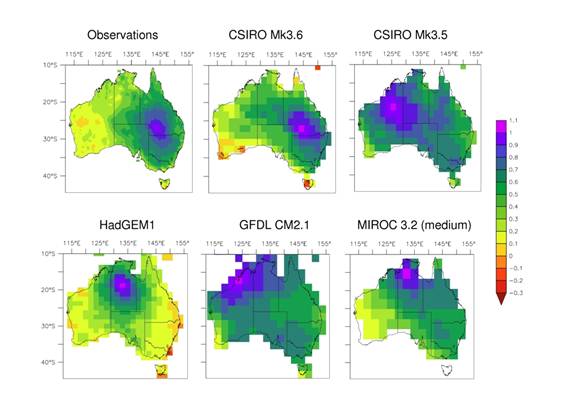 The IPCC AR4 report shows that over most of Australia precipitation increases and decreases are only shown in two-thirds of all the models, in other words, up to one third of the models might predict no change or the opposite result in exactly the same area.

As NIPCC explains, if we are going to use models to overhaul our economies we would hope they do better at predictions than being low or absent in skill, yet that’s exactly what Kiktev et al found when they compared five GCMs with observations:

Models might get it right in some places, but Australia is one of the hardest:

“while most climate model simulations show low biases over Europe, inter-model variations in bias over Australia and Amazonia are considerable. “ Mehran et al.

The Koutsoyiannis studies showed that predictions didn’t just fail on the continental scale, they failed on the regional and local scale as well, and they were talking about 30 years, not 60.[ii]

Often precipitation projections from different models are blended together  and averaged, as if adding up a cluster of failures will somehow produce accurate results.

New theories on rainfall suggest that the models don’t even have the basics right. We used to think that forests grow where the rain falls, but research now suggests that rain falls where forests grow.

Other posts on rainfall