It is good news that the climate scientists, PhD’s, children, tourists and media are finally safe on board the Aurora Australia (though I note the webcam this morning still shows that boat surrounded by sea ice). Spare a thought for the sailors still on board the Shokalskiy.

Shub Niggurath writes to me today to explain that the ill-fated ship headed back to an area heavy with ice, knowing a storm was approaching. The ships captain had wanted to get away sooner, but was delayed because the expedition team was late returning due to a mechanical mishap. The details of that delay are below. Further down I note a New Zealand writer argues they were taking “undue risk” because sea ice data and wind data were available that “shows the ice didn’t come out of nowhere – nor from a sudden chill.”

Pierre Gosslin asks on his site why the organizers used a cheap “ice strengthened” boat that was not able to break ice, yet sold berths to inexperienced tourists, and ventured into major sea ice zones.

Looks like the Antarctic team was unlucky to get nice weather with less wind. I marvel that the Commonwealth Bay and Cape Denison area are known as the “windiest place on Earth” because of the Katabatic wind (which would normally help blow the sea ice away).

“…the true character of Commonwealth Bay was soon to reveal itself with katabatic winds, that drain dense cold air from the polar plateau inland behind Commonwealth Bay, which are the most ferocious and persistent winds on the planet. Cecil Madigan, the AAE meteorologist, recorded a mean wind-speed of over 71 kilometres per hour over nearly two years of recording. Cape Denison is now acknowledged as the windiest place on Earth.” [Australian Govt pdf]

“The smallest mistakes can cascade into a disaster”
— Chris Turney

Akademik Shokalskiy and its passengers

It has been more than a  week since the Akademik Shokalskiy got stuck in Antarctic sea ice. Its passengers have now been removed. Events are embedded safely enough in the past. Fortunately, beyond the monopoly of the flowery-but-unilluminating Alok Jha, the disinformation-obsessed BBC, and the forced gaiety of the eco-tourists, independent voices are available. One of them is Janet Rice, an Australian Green party Senate candidate. 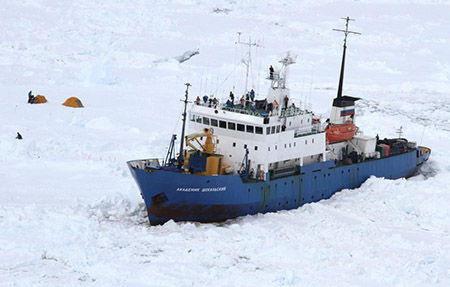 Akademik Shokalskiy and its passengers

In any failure, cascades and systemic problems are likely to be present. Uncomfortable but obvious questions are on everyone’s minds: Anthony Watts and Andrew Bolt have put them out.

On the other hand, the official narrative is as follows: The Shokalskiy arrived at Commonwealth bay, Antarctica. They were two miles from open sea. ‘Suddenly’, a blizzard arose and thick ice packed around the ship. The vessel was trapped.

Consider how improbable the sequence sounds. Weather forecasts are easily available. A ship venturing to the Antarctic would have had access to the best possible forecasts. The captain would have known well in advance of approaching storms and high winds. The expeditioners proclaim how aware they were things could change on a dime. Which means, there must have been some limiting factor preventing action.

[1] On the 19th and 20th, two teams made round trips to Mawson’s huts in Cape Denison. The weather was good—in the words of Turney, “glorious sunshine” and winds “all spent”. The second party arrived back at the ship by morning on the 21st, at 5:30 AM. The groups used Argo all-terrain-vehicles (ATVs)

[2] Starting Saturday the 21st, the ship pushed off from the ‘fast ice’ and traveled away from the coast. On Sunday the 22nd the passengers were aware a blizzard was forecast. Wrote Rice at around 8PM:

“Ah it must be because the days are now getting shorter that the weather has changed! There’s a blizzard on the way apparently!”

[3] On Monday the 23rd, the fateful day, the Akademik Shokalskiy sailed back toward the coast. The goal was to take people to Hodgeman islets, 8 km from the edge of fast ice, to study penguins and seals. Recall the circumstances under which this was being done: a storm was approaching and the ship was moving into thick, fast ice it well knew had built up substantially in the area.

Artwork adapted from map available on the Guardian website

For the moment however the weather was good. According to Rice, although winds were already up and snowing there was ‘blue sky and sunshine for some periods’. She wrote:

“We were out in similar conditions this afternoon. Somewhat brighter – in fact there was blue sky and sunshine for some periods. The weather has been better than the forecast blizzard, so that was good.”

This was the window they were straddling, the cusp, before which the ship was moving and free and after which it found itself jammed in thick ice.

Events on the ground

The Hodgeman trip was made with zodiacs (an inflatable boat) and Argos. Exact details are not known, but the Argos were towed ashore by the zodiacs in the final stretch. Two Argos made it dry and onto the rocks but the third one dipped underwater. As Rice reports (archived here):

“The first drama of the day was the sinking – or almost! – of one of the Argos. The Argos are designed to be amphibious – just. They were launched today off the ship – and two of the three made it safely being towed by a zodiac the 50 metres or so to shore. The third was towed too fast it seems – and water came over the bonnet / bow, flooding both the engine and the vehicle itself.

Even earlier, Rice had encountered vehicular troubles with the Argo. Argo manufacturer ODG claims their vehicles are fully amphibious. It is not clear how the engine took in water when not running, but it stopped working.

The unexpected loss of operation of one of the vehicles slowed down the team. Not only were they stuck towing back the non-functioning vehicle, people had to be ferried in the remaining ones. Meanwhile, the storm closed in. As Kerry-Jayne Wilson, a penguin biologist running the Blue Penguin Trust put it, they ‘set out in blowing snow and near gale winds; it got worse’. The captain was definitely concerned. In the words of Rice:

Because of the Argo mishap we got off late, and had one less vehicle to ferry people to and fro. I’m told the Captain was becoming rather definite late in the afternoon that we needed to get everyone back on board ASAP because of the coming weather and the ice closing in.

There can be little question the misadventure cost the expedition dearly. The ship was in a position where getting away was possible but held up for the exploring party to get back aboard:

I’m sure the Captain would have been much happier if we had got away a few hours earlier. Maybe we would have made it through the worst before it consolidated as much as it has with the very cold south- easterly winds blowing the ice away from the coast, around and behind us as well as ahead.

By the evening of Monday the ship was trapped though perhaps not realizing it. Rice saw from her porthole the ship was making ‘very slow progress … oscillat[ing] between hardly moving to suddenly being jolted sideways with a crunch’. At 9 AM morning the next day, they had moved ‘less than a kilometre over night, and [were] now stationary in a sea of ice’.

The ship is still stuck in the same place.

There can be little doubt the Akademik Shokalskiy knew there was extensive, thick, multi-year ice in Commonwealth Bay. Turney knew southerly winds were prevalent and would likely drive pack ice against their vessel. Yet, by committing to the Hodgeson islands in the narrow window, the team put significant pressures on their time. The all-terrain vehicle mishap became the tipping point in the debacle.

Was the sea-ice movement foreseeable?

The SpiritofMawson team had tools that Douglass Mawson could only have dreamed of. But perhaps that is part of the problem. Perhaps knowing that satellites give us unprecedented data and fossil fuel powered flying machinery is at our beck and call gives us a sense of security that lulls leaders into careless mistakes?

DataSciNZ points out that sea-ice data was available showing that sea ice was much higher than in recent years, and wind data was also available . DataSciNz ask: “Were the organisers of the AAE wholly unprepared, or at least practising risk management an order of magnitude more sloppy than we’ve come to expect from activities planned and funded through major Antarctic research nations?” They conclude “First, there is data available that seems (from an armchair observer’s perspective) to suggest the AAE was taking an undue risk, with unfavourable weather rapidly advancing on them when they entered unusually extensive sea ice.”

It’s easy to predict things in hindsight, but those who justify the $1.5m taxpayer funded expense ought to explain whether Prof Chris Turney had this sea ice and wind data, and if so, why the movement of the ice caught them by surprise.
The Sea-ice data:

“The short animation I’ve prepared from satellite data (a new microwave instrument) available via Germany shows that expedition’s ship was taking a remarkable risk by attempting to penetrate an unusually large extent of sea ice in the region where they accessed the Antarctic coast at the location shown by the arrow.”

I note each pixel is 3.1km2. So resolution is less than ideal for predicting individual boat trips, nonetheless, surely an essential tool. Did the expedition have this data?
DataSciNZ points to the excellent new NullSchool wind data tool (which I myself saw for the first time just before Christmas, check it out!). 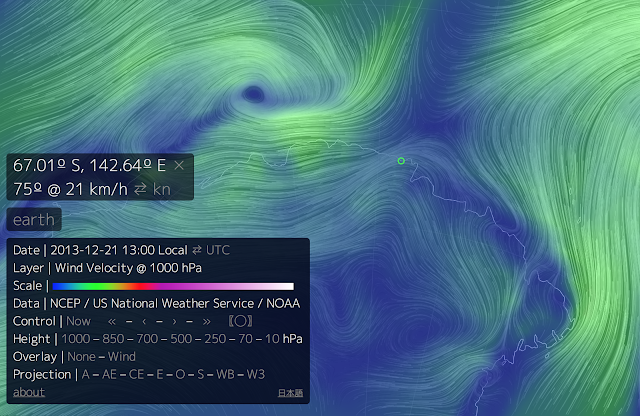 A good spell of weather was just ending when they entered the pack ice (and reached the coast at the green dot) on December 21.

“Second, not enough people are aware of this data. I’d recently become aware of the wind field tool, but finding near real-time sea ice data in a visual format is challenging. Put together, they become useful in describing the situation the AAE faced. And it also shows the ice didn’t come out of nowhere – nor from a sudden chill. Having the extent of sea ice as a map graphic makes a big difference. Yet, like a great deal of scientific data, sea ice extent is most readily available only as raw data. I’d like to laud and thank the German scientists for making it available! And also the Cameron Beccario (@cambecc) who appears to be responsible for the amazing wind field visualisation, which has transformed the long available NCEP data into something much more accessible.”
— DataSciNZ

From me, a few more quotes about just how horribly windy Commonwealth Bay is:

From MADIGAN (1929)”   ““The wind was the most remarkable feature of the  meteorology or indeed  of the locality.  It is the outstanding characteristic of Adelie Land. Commonwealth Bay is  probably the windiest place on earth and certainly appears to be so as far as records up to the present  indicate. For nine months of the year an almost continuous blizzard rages, and for weeks on end one  can only crawl about outside the shelter of the hut unable to see an arm’s length owing to the blinding snow drift. . .””

The wind is well known to start and stop suddenly:

“The principle features of the katabatic wind in the neighbourhood of Commonwealth Bay, Antarctica, are described with particular emphasis on the sudden onsets and cessations of the wind.” “The end and particularly the onset of the strong wind is frequently very sudden, with the wind rising  from almost calm to gale strength in a few minutes.”